Steve Carell’s glittering career, which includes fan favorite performances such as the annoying manager from “The Office” series and goofy spy in “Get Smart”, has really set the bar for anything the star is involved in. Therefore, Carell’s new series “Space Force” was met with much anticipation as viewers prepared to see the actor play an intergalactic general alongside a star studded cast including John Malkovich, Ben Schwartz, Lisa Kudrow and Jimmy O. Yang

The Netflix trailer for the 10-episode series also helped to launch viewer’s expectations sky high, however, as the season has panned out, the lackluster plot saw the show misfire and end up on the wrong side of the moon.

The first episode of ‘Space Force’ begins with General Mark Naird (Steve Carell) receiving his fourth star and without knowledge, is appointed to the first ever Chief of Space Operations at the Space Force. This means Gen Naird’s family, including daughter Erin (Diana Silvers) and wife Maggie (Lisa Kudrow), are relocated to Colorado.

The move proves disastrous as a turn of events leave the general’s wife serving a 40-year prison sentence while he fights with partner Dr. Adrian Mallory over a $6 billion rocket being launched into space. All this happens while his daughter goes through puberty!

The episodes that follow feature Naird dealing with endless workplace and family problems compounded by his social media director, Tony Scarapiducci’s (Ben Schwartz) mission to humiliate him and arch enemy General Kick Grabaston intent to take over his institution.

Carrell did hold his weight in his performance as the center of comedy and there are some moments which will please fans, however they are not enough to push the show upward.

More like a parody of the US military, the comedy revolves around stereotypes of the American idiot, which have been done many times before, and better. 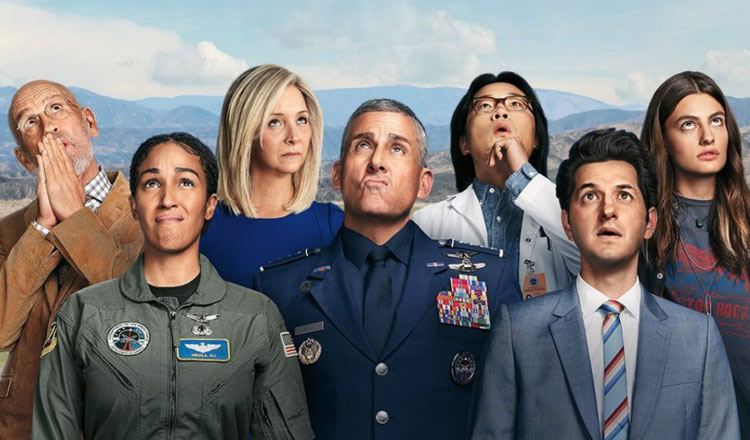 There are also moments in which the characters try to be satirical but without being overly insulting, which is a huge drawback when embarking on such humour. In contrast, they have no problem humiliating other nations, especially China and Russia, alienating the international audience Netflix enjoys.

It had been expected that “Space Force” would be another outstanding workplace sitcom created by Steve Carell after The Office, but unfortunately, it is not on the same planet.

To make it worse, the series does not get much out of Lisa Kudrow, whose infamous Friends character should have at least seen her skills utilised more, especially on the comedy front. Instead the plot sees her out of action, serving a prison sentence and essentially locked out of the narrative.

Her biggest moment comes in a faltering attempt at comedy, when telling Naird to seek another companion to fulfil his sexual needs, what on Earth?

Houston, we do not have lift off.

Watch and Pick Choices on