Home - Silk could be a slick way forward post-COVID-19

Silk could be a slick way forward post-COVID-19

A senior official of the Royal University of Phnom Penh has appealed to the local community, private sector and relevant stakeholders to join a silk project development in Cambodia.

Mey Kalyan, chairman of the board of trustees at the Royal University of Phnom Penh (RUPP), and the main person behind the Silk Research Centre, said his institution has enough know-how to deliver healthy quality silkworms and mulberry trees to communities in rural areas. The worms, which are in the process of developing into moths, are fed with mulberry leaves, which produce the best silk. 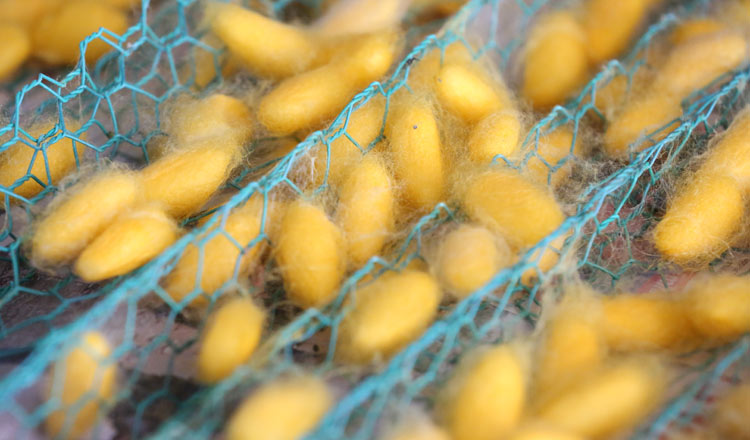 “Armed with new technology, silk activities are ready to launch. We appealed to all sorts people to join us, both leaders in the silk industry and community people, especially the migrant workers from Thailand,” Mr Mey said.

“Now, we have technology and the university has advanced its knowledge of the silkworm, providing a good foundation for an expanded silk sector in Cambodia. Our silkworms are disease-free, resistant to heat and, at the same time, more productive,” he added.

Mey added that COVID-19 will create a “new normal” for Cambodia. “One learning is that Cambodia has to strengthen the rural economy, to make the economy more resilient to future shock. Within this context, silk could be one element. And we can explore the expansion of others, such as cashew nuts, fruits and vegetables. We are preparing for the medium- to long-term. Now there are many returnees back in Cambodia too. It is time for us to think innovatively. Agricultural development will not happen easily. We need to plant good seeds,” he said.

According to Mey, 400 tonnes of silk products are used in the country every year, most of them imported.

Farmers can earn between $500 and $600 every harvest cycle per hectare of mulberry land and if they do six cycles a year, they would earn $4,500 per year compared with only $700 per hectare of paddy rice in one season, Mey pointed out.

“We know how to do it and, with the technology we have, we understand how to raise silkworms, produce healthy silkworms and have the techniques to grow mulberry trees with good yields, so community people now can join us,” he added. With the rainy season due to begin in May, Mey said that the university, together with three initial silk leaders in Kampong Speu, Mondulkiri and Battambang, will roll out the silk activities with about net 20 hectares of mulberry trees.

Phean Sophoan, one of the Rupp’s silk leaders at Mondulkiri, told Khmer Times that she has five hectares of mulberry trees and will work with the university to raise silkworms and supply the cocoon to the market, especially to the reeling facility at Kampong Speu and Lotus Silk.

“We need  hundreds of thousands of silkworms from RUPP’s Silk Research Centre this May,” Phean said. She added there are lots of silk leaders interested in RUPP’s silk worms and some have started growing mulberry trees.

The industry also has by-products in the form of mulberry fruit for human consumption and for making wine. Silkworm cocoons are also used in high-end expensive cosmetics.