The National Election Committee has warned civil society organisations that intend to deploy observers to monitor the election on July 29 without being registered that they will face the law.

The NEC issued a statement on Saturday informing all its Phnom Penh and 24 provincial election committees to closely monitor election watchdog Comfel for training its volunteers to monitor the election on July 29, noting that the NGO was infringing on the Law on Political Parties, election law and law on NGOs and associations.

“The NEC thinks that this activity to monitor the election must be permitted and recognised by the NEC,” NEC secretary-general Tep Nytha said in the statement.

NEC spokesman Hang Puthea said yesterday that any organisation that wished to deploy observers to monitor the electoral process had to apply for registration at the NEC.

“We issue this letter as a reminder to them that if they want to observe the election they must register their observers at the NEC,” Mr Puthea said, noting that the NEC will ensure public security both inside and outside of polling stations. 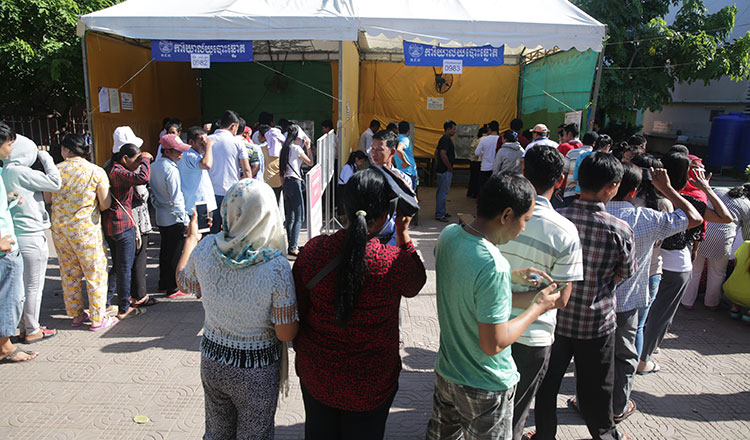 “They have to face the law if they are breaking the law,” he added.

Mr Puthea said that Comfrel decided not to register observers and if its insists on deploying volunteers to polling stations nonetheless, it would be violating article 142 of the law on elections which banned surveys and interviews.

Comfrel, as well as its counterpart Nicfec, said that they decided not to monitor the election because they were blacklisted following the June 2017 commune elections.

Thirty-eight civil society groups formed a ‘Situation Room’ to monitor the June 4, 2017 commune elections, but it was later probed under the Law on Association and Non-governmental Organisations.

The investigation concluded the consortium should have registered with the ministry as a single entity according to the law.

Korn Savang, a Comfrel coordinator, said that the organisation has trained about 300 volunteers to monitor the political situation and human rights outside polling stations.

“We just want to observe general situations like other people do,” Mr Savang said. “We don’t see any law against that.”​“We will not evaluate the electoral process,” he added “We just want to monitor the political situation and human rights issues.”

Sam Kuntheamy, executive director of Nicfec, said that the statement by the NEC was infringing on freedom of expression.

“No one would be breaking the law because we would just be monitoring things outside the polling stations,” he noted, adding that his organisation was planning on monitoring the upcoming campaign period.

“It does not break the law because people have rights to monitor the situation and we are not going inside the polling stations,” he said.