Home - IMF: Global economy is still not out of the woods

IMF: Global economy is still not out of the woods

The International Monetary Fund (IMF) has projected the global economy growth will strengthen from 2.9 percent in 2019 to 3.3 percent in 2020 and 3.4 percent in 2021. This comes after the observation of signs of stabilisation and risk reduction which includes the Phase 1 US-China trade deal.

In her post on the IMFBlog, Managing Director Kristalina Georgieva says monetary
and fiscal policy have been  playing their part.

However, despite these better projections, the global economy still faces emerging uncertainties.

In the recent Group of 20 meeting in Riyadh, Saudi Arabia, finance chiefs from the world’s largest economies came together to discuss the looming threats that are affecting the global economy and the Coronavirus was one of the biggest concerns.

In fact, the IMF managing director also points out that the current most pressing uncertainty is the COVID-19 Novel Coronavirus outbreak, describing it as the health emergency nobody had anticipated in January. The IMF expects the Chinese economy to bounce back, depending on how quickly the spread of the virus is contained.

“The result would be a sharp drop in gross domestic product (GDP) in China in the first quarter of 2020, but only a small reduction for the entire year. Spillovers to other countries would remain relatively minor and short-lived, mostly through temporary supply chain disruptions, tourism and travel restrictions,” Georgieva highlighted.

The IMF had also warned financial chiefs during the G20 meeting about the economic ripple effects that could arise from the outbreak of the Novel Coronavirus and discussions on how to contain it were underway.

According to the IMF, a long-lasting and more severe outbreak would result in a sharper and more protracted growth slowdown in China. Georgieva points out that its global impact would be amplified through more substantial supply chain disruptions and a more persistent drop in investor confidence.

The virus has killed more than 2,400 people, infected nearly 80,000 and disrupted global supply chains, which have led to lower global growth forecasts.

The disruption comes at a time when policymakers are struggling to come up with effective ways to boost growth because many countries are operating on record-low interest rates, which in return limits their ability to provide effective monetary policy. 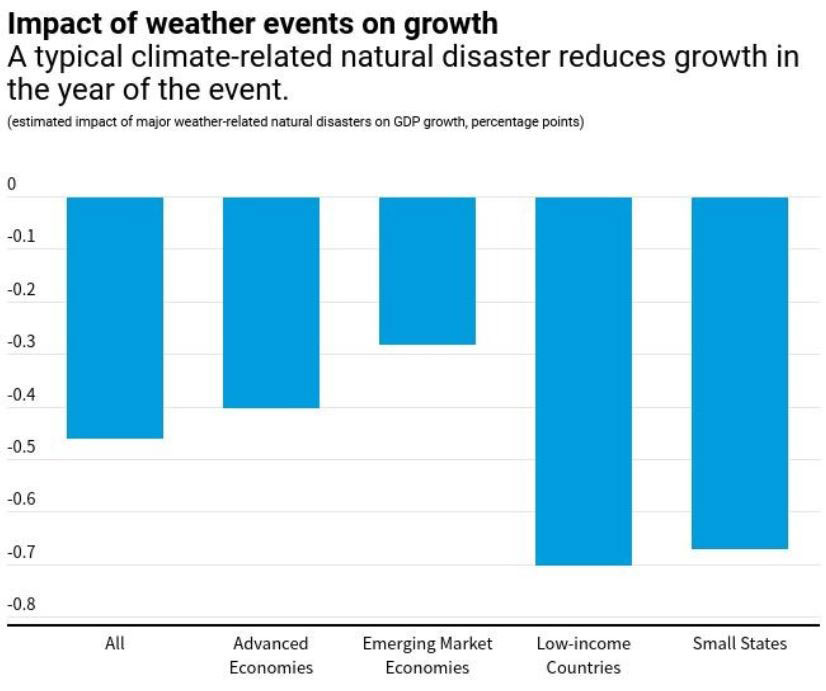 The IMF believes that there are three areas where finance ministers and central bank governors can make progress in their efforts to provide more certainty about future actions.

“The Phase 1 trade deal between the US and China eliminated some of the immediate negative consequences for global growth,” Georgieva says.

The IMF currently estimates the deal will reduce the drag from trade tensions on the level of GDP this year by 0.2 percent; about one quarter of the total impact from the virus. The organisation also recommends a larger reduction in the Phase 1 trade deal because the deal only addresses a small share of the recently imposed tariffs and specifies minimum increases in China’s imports from the US.

“These types of bilateral managed trade arrangements have the potential to distort trade and investment while harming global growth. In fact, our estimates suggest that the managed trade provisions cost the global economy close to $100 billion,” Georgieva added.

The managing director also stressed broader concerns, for instance the agreement between both countries leaves many of the underlying issues unaddressed because tackling trade issues is only the start. Following this issue, she points out that the global economy will continue to face effects if urgent global challenges such as climate change continue to fail to be recognised or dealt with.

“The human toll of climate change confronts us every day. Think of the recent Australian wildfires. The economic costs confront us too,” says Georgieva.

She uses Hurricane Maria as an example that had amounted to over 200 percent of Dominica’s GDP and more than 60 percent of Puerto Rico’s GDP.

The IMF team estimates that a typical climate-related natural disaster reduces growth by an average of 0.4 percentage points in the affected country in the year of the event. As such, events continue to become frequent and poorer countries are the least able to cope with the impact.

Concerns regarding the rise of global temperatures and extreme weather events have been the focus of world leaders and financiers over the years. The IMF has also included climate-related disasters in a list of risks that could impact the global economy this year.

During the G-20 meeting, nations had come together to collectively sound the alarm over the threat to the financial system that was posed by the climate emergency.

According to the IMF, global oil demand is expected to peak in the coming decades. The team behind the IMF highlighted that investments in clean energy and resilient infrastructure can yield a triple dividend: averting future losses, delivering innovation gains  and creating new opportunities for those most in need. 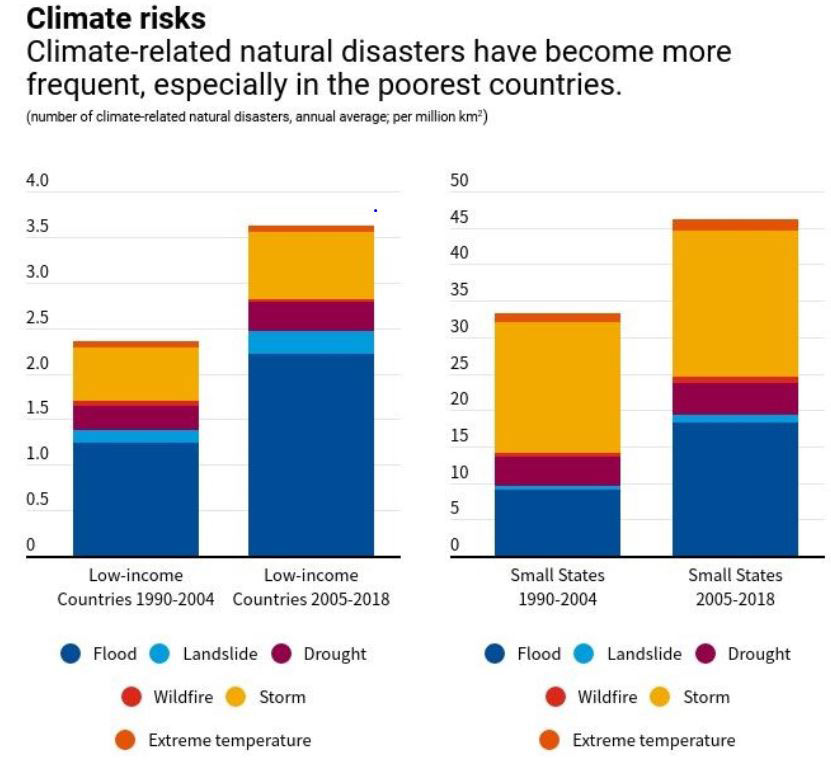 Additionally, revenues generated from carbon taxes , for instance, can be used to cut taxes elsewhere and give assistance to affected households, or finance spending that can help close some of the gaps in society.

“For countries and communities at the highest risk of climate disasters, investing in adaptation is both urgent and cost-effective. Analysis suggests the benefits of such investments could far outweigh their cost,” says Georgieva.

Another issue Georgieva highlighted was the persistently high income and wealth inequalities. She stressed that there is a significant opportunity gap when it comes to gender, age and geography.

“We know these gaps quickly can become chasms that fuel uncertainty about the future, distrust in government and ultimately contribute to social unrest,” she added. 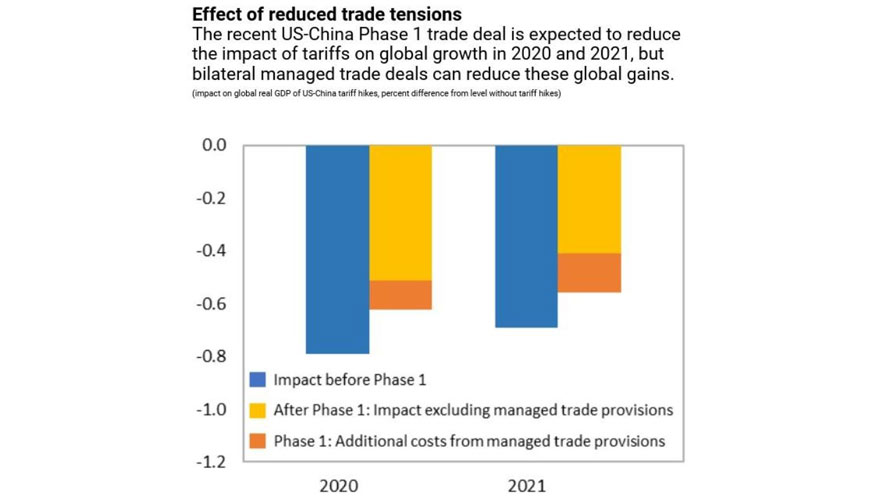 The IMF has identified key areas where access to opportunity can be increased, in particular, investing in high-quality education, research and development (R&D) as well as digitilisation. Georgieva pointed out that the timing is right because the current low-interest-rate environment means that policymakers may have additional money to spend.

Furthermore, she stressed that because public debt is near record levels in many places and, as such, in countries with a high debt-to-GDP ratio, fiscal restraints continue to be warranted.

“However, reducing deficits when needed should always be done in a way that protects essential social spending. This is how countries can increase access to opportunities for all and build a stronger foundation within their own economies,” Georgieva says.

“Working together, we can take the necessary steps to reduce uncertainty and put the global economy on a more solid footing,” she concluded.

The IMF serves to ensure the stability of the international monetary system and does so through keeping track of the global economy and the economies of member countries as well as lending to countries with balance of payments difficulties.