Chira, the main protagonist of this novel, is an independent lady. She is so successful in her career yet so hopeless in her relationships. She is nearly 30 years old with a child but still has not married, most of her friends had already started a family until she met Pheng.

Pheng is a single handsome man and they met each other while they are on a trip to Indonesia. The funny thing is they did not think of each other when coming back to Cambodia. As they both thought each other were accompanying tourists from different countries. It was only at a later date did they find out they were from the same country, this occurred on their final day of the trip. 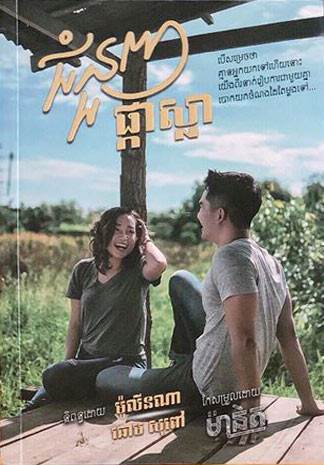 It was then Chira proposed her idea of a fake wedding business to Pheng, who initially thought it was a stupid idea since it sounded like a hoax. Nevertheless, Pheng decided to do it with Chira since he had no other way to help his brother during a family crisis.

I am going to stop the summary of the story here before I spoil the entire novel. It is better if you read this novel and find out about the ending yourself since you may not want to stop reading until you finish this 232-page novel.

I personally enjoyed reading this novel so much it is unsurprisingly one of my favourites from #Slanhseavphov. I love the way the author derives inspiration from the real feeling of a single person.

Attending so many weddings consecutively it is still interesting to read from one page to another. I feel that I can relate to most of what happened to the main characters throughout the story.

Chira, for example, is quite a bossy lady yet she is also incredibly thoughtful when it comes to her work. I love how independent and charismatic she is but at the same time, I do not favour her bossy personality.

Another point worth raising about this novel is that I admire how they put Chira’s life story relatively close to the readers’. This is because while I was reading about what happened to Chira, I also can feel myself and reflect on my own personal experiences.

Especially the time when she had to let go of her pride and beg the noble lady for another chance to be an event planner because she needs to make a living and raise her own child.

That scenario, in my opinion, is touching because that does not only illustrate the love of a mother but also how pride is no longer important when it comes to saving lives. Chira has to let go of her reputation and swallow her pride to bow down because she cannot let her son starve to death. She cannot forgive herself for not taking responsibility over her child, which is really an iconic moment for Chira and also the peak of the overall story.

The book can be found at Slanhseavphov bookshop. Author: Mong Molina & Chorm Sopov. ●