Four Cambodian’s have received accolades in Stage 1 of the 2020 Honda Young Engineer and Scientist Awards on Feb 8, at the Kizuna Hall of Cambodia and Japan Cooperation Center in Phnom Penh.

The four awardees were; Ouk Karuna, Kong Rathseyhak, Chheng Llay and San Monysolida who were selected for sustainable development of the environment and engineering efforts. All received $3,000 in grant money.

The competition provides a platform for young Cambodian’s to showcase their talents and creativity in Science, Technology, Engineering and Math (STEM) subjects.

The awards also aim to strengthen the interaction between young Japanese and Cambodians who have ambitions and passions in leading a science and technology project in their respective countries. 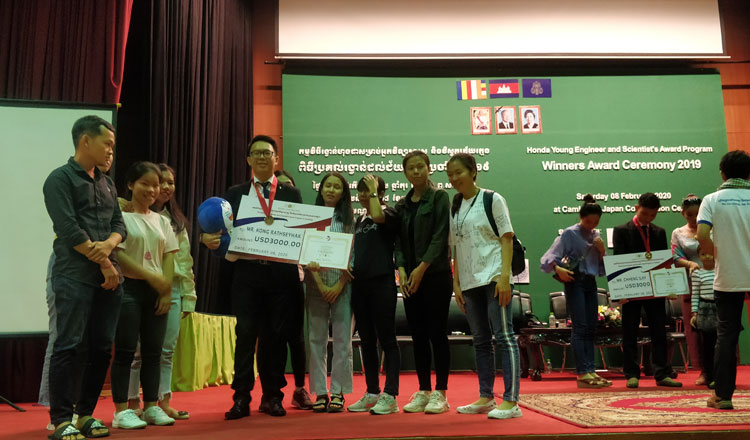 The competition has many levels that challenge candidates academically and forces them to encounter many diverse and new themes of STEM subjects, explained one of the four winners San Monysolida.

“Taking part in this competition has allowed me many hands-on experiences in both the field of science and bioengineering. I have greatly improved my skills and knowledge in these chosen field,” said the 22-year-old.

Monysolida also stated that she aims to motivate her fellow generation to be more determined to reach their dreams, especially if they are working on contributing something significant to society.

“This was not my first attempt at applying for the award, I tried countless times, and if I chose to give up I would not be here in front of you today. Thus, in whatever you do, failure always happens but it should not be a barrier to stop you from achieving your dreams and goals,” said Monysolida.

In stage 2 called “Y-E-S AWARD PLUS”, each of the four awardees will receive an additional $10,000 towards their postgraduate study at a Japanese university for more than one year.●