Over the past six months, many reports and articles have been published concerning the Mekong River and its record low water level, plunging fishing communities into crisis and creating negative impacts on water security and fish abundance.

During the rainy season from May to November, the Mekong’s water level rises. In 2019, on the contrary, the water level hit the record low.  A recent forum, brought together fishery communities and civil society organisations from Cambodia, Thailand, and Vietnam, expressed their concerns over the losses of access to natural resources and biodiversity resulted from hydropower dams.

In early November, a conversation with community fishery in one of the target areas of Oxfam’s partner – Northeastern Rural Development organization (NRD) brought up critical issue regarding the Mekong River, they noticed in 2019 has been a challenging year.

The community has experienced the abrupt changes of the river’s seasonal movement and the unusual rapid changes of water level. Consequently, the locals have been struggling to carry on with their fishery activities due to the absence of several fish species.

Mrs Kong Kim In, a fisher folk in Kratie province said: “I can see the changes of water flow. Last year and this year, the water level increased rapidly and flooded my house in just one night then it dropped instantly. In 2016, during this time, the water was just 10-20m from my backyard, but now the water is far away, it’s about 470m from the riverbank.”

“This is my first time seeing this such low level and being unable to catch any fish. In 2016 and 2017, my husband and I spent only 2-3 hours fishing and we could catch around 40 –50 kg. During the high season, we could catch up to 100 kg. But in the last 2 years, we have spent entire nights fishing but could only catch 5-10 kg, and now during this month somedays we can’t even catch any fish.”

Community fishery are always passionate and enthusiastic to protect the water resources, but lately it has been hard to keep members active. In the past two years, the community could not catch enough fish to fulfil domestic demands. Many members have migrated elsewhere hoping to find a better living or are busy trying to find ways to support their families. Consequently, patrolling and surveillance have significantly declined.

Mr Buth Nim, head of Prey Kreang’s Community Fishery said: “In the last 2 years, the community has not been able to catch much fish to support their livelihood and income. Some people migrate to find work and some others are not be able to feed their family. How can we keep active in the community’s activities once we can’t find enough to eat ourselves? 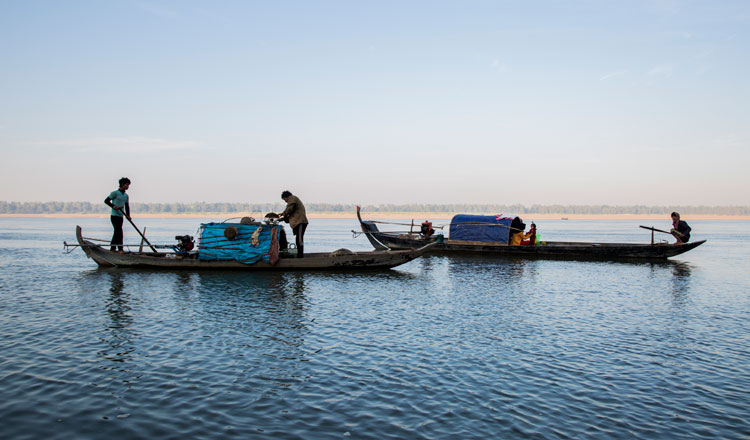 “When we don’t have regular patrolling, illegal fishermen will exploit our resources. As fish availability gets less, they use illegal fishing methods. In our area, illegal fishing increases and we are now incapable of addressing this issue. If the Hydropower dam issue is not addressed, the fish in the Mekong will disappear”.

Within current situation community has decrease income and increasing expense as they need to purchase water to use in the household and watering the vegetation.

“Every day I am really concerned on what to do if the river runs out of fish and water? We can’t afford buying big fish at the village or market because the price has soared,” said Mrs Nun Sang, fisher folk in Prey Kreang village.

“Sometimes when I caught big fish, I don’t dare to eat; instead, I sell it. So, now our eating behavior has changed. We eat more meats, eggs and chickens. Our income declines, but our expenditure increases because the river is very far away and getting access to water is challenging. I need to buy one tank of water for KHR 10,000 for our household needs and vegetation watering, but it only lasts for three days.”

Once these changes on the Mekong become unstoppable, people may end up feeling less connected to and less able to rely on the river. Mekong River is even more needed as the pace of changes is rapid.

The Mekong basin underpins farming and fishing for many millions of people in China, Myanmar, Laos, Thailand, Cambodia and Vietnam. Since 2005, Oxfam works with civil society, local communities and other stakeholders to solve this problem.

The aim is to influence decision-making, making it more inclusive for local communities, so that water, land and natural resources are managed more equitably and sustainably. Oxfam supports local partners such as NRD to have platform whereby voices and actions of riverine community along the Mekong in Cambodia promote stronger participations and engagement of community fishery in water governance.