As Phnom Penh’s landscape changes every day, old buildings have been put down to make room for modern buildings and skyscrapers. There are people who enjoy financial gains from the new projects, but there are also those who are contrite about losing the old structures. Moritz Henning and Walter Koditek, a pair of friends and architects from Germany, are among the latter. Wanting those structures to be remembered forever, the two wrote a detailed guide on the city’s architectural features, the first of its kind in the modern era. Story by Taing Rinith.

Walter Koditek is a Hong Kong-based urban planner and development expert, but from 2006 to 2010, the graduate from the Technische Universität Berlin lived and worked in Cambodia. Working as an Advisor for Urban Planning in the Battambang Municipality. It is during this time that he fell in love with the Cambodian architectural styles, which could be seen through the old structures throughout the country. 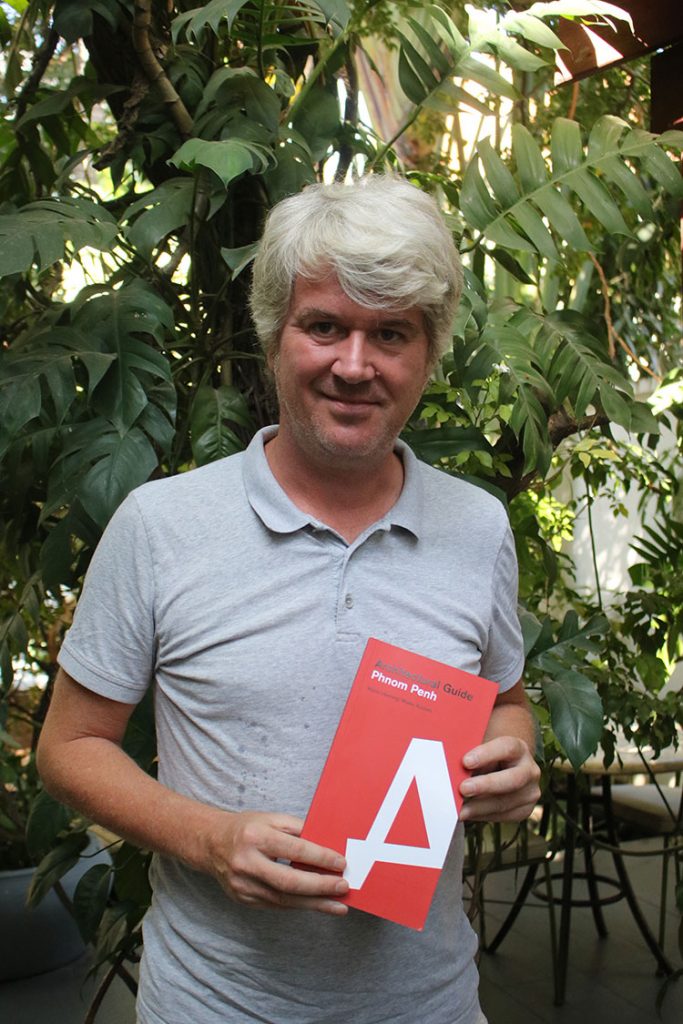 “Cambodia has such a rich and diverse built heritage, a legacy of more than one thousand years of cultural history,” Walter says. “I am especially interested in the urban heritage of more recent periods, let’s say the last 150 years, as this architecture is often forgotten and neglected. It stands ‘in the shadows’ of the ancient Khmer masterpieces from Angkor times.”

Walter refers to the New Khmer Architecture, a movement started by the young Khmer architects that studied abroad and contributed to the huge national building programme of King Sihanouk, including the legendary Vann Molyvann, who led it.

The movement is characterised by a blend of international modernist architecture style with local vernacular forms and elements, creating a unique architectural expression which is “truly adapted to the local context and tropical climate”.

“I hope the quality of the architecture from that period, and I mean not only the masterpieces like the Olympic Stadium or the Chaktomuk Hall, but also the ‘normal’ buildings and structures like villas, apartment buildings, schools, bridges and others will be appreciated more in the future and will remain to be an important part of the urban character and cityscape of Phnom Penh, as well as other provincial centers throughout the country,” Walter adds.

In 2007, Walter invited Moritz Henning, a Berlin-based architect and writer and his “dear friend from school”, to visit Cambodia and introduce Moritz to his favourite part of the country. Like his friend had expected, Moritz too was attracted by the New Khmer Architecture.

“I was fascinated about the New Khmer Architecture or the modernist, something newly born and used by the country to define itself after getting rid of the French, especially because of the way the country and the architects were trying to find their own identity, defined by something international and modern on one side and Khmer Style on the other side,” Moritz says.

“I love the works by Vann Molyvann and other wonderful Cambodian architects, including how they apply the concept of green architecture, which is based on exploiting the nature in building the structure and to maximise the ventilation in the building.”

In the years after their visit, the two friends would be researching the topic. Then one day, Moritz had an idea.

“One day in 2015, I thought Walter and I know many things about Cambodia, so we should do something about that,” Moritz says. “I had a concept about a book.”

“Lastly, in recent years, while visiting the city for research work and holidays, we witnessed the rapid economic development and building boom in the capital, and we thought, in the view of this rapid urban transformation we need to document the outstanding buildings from different historical periods before they disappear.”

Moritz proposed their concept to Berlin’s DOM publisher, who said yes to it. That was how the recently published Architectural Guide Phnom Penh was born.

The 363-page guide, containing contemporary photographs and historical images, gives a comprehensive overview of Phnom Penh’s building heritage, highlighting its history and architectural layers, and also reveals the less-known places off the beaten track. It presents more than 140 works that illuminate the four major phases of development in the city’s ever-changing urban history.

According to the authors, compiling this guide is one of the greatest challenges they ever faced.

“Because of the war in Cambodia it is unfortunately in the unique situation that most information about urban development and architecture has been lost, and it needed a lot of research in archives, publications, articles and papers and old maps of the city, to put together ‘the pieces of the puzzle,’ Walter, the co-writer, says.

“But this work was very rewarding, as by chance we found quite some additional important buildings that we hadn’t realised before, and also interesting information and stories behind them.”

The authors say they were honestly overwhelmed by the scale of positive feedback they received at the event and it seems, many people have been waiting for a book like this.

Chea Sophara, the Minister of Land Management, Urban Planning and Construction, called the book a “precious document” and said he would give support for it to be translated into Khmer.

“We were also hoping that the book will raise awareness for the unique character of Phnom Penh and its architecture, and allow for a better understanding of its cultural heritage, especially for the young generation of architects and urban planners,” Walter says.

It makes an important contribution to current debates on heritage preservation in the booming metropolis. Interviews with local experts present their perspectives on the city and place the buildings in a broader context.

Architectural Guide Phnom Penh can be purchased online at $32 per copy. It will also be available soon at Monument Books.

Remembering the Goddess of Flower