Calm urged ahead of Sokha trial

Ahead of the start of the treason trial of Kem Sokha today, his lawyer yesterday said the former CNRP leader is urging his supporters to stay calm and collected.

Sokha was apprehended in September 2017 for allegedly colluding with the US to topple the government through a colour revolution. Two months later, the CNRP was dissolved by the Supreme Court.

Even though space in the courtroom will be limited, CNRP activists are expected to attend the trial outside, according to Facebook posts.

Chan Chen, one of Sokha’s lawyers, yesterday said his client hopes the situation outside the courtroom will be peaceful as security forces will be deployed to clamp down on protesters causing chaos.

“Sokha told us that he is appealing to his supporters to not hit your head against the stones – do not cause any trouble or violence,” Mr Chen said. “Resolve the problems peacefully.”

He said Sokha’s team of lawyers have prepared all backing evidence and documents to prove his client’s innocence.

Court spokesman Kuch Kimlong yesterday said only 30 seats will be available during Sokha’s trial, mostly reserved for diplomats and members of political parties.

Phnom Penh Municipal Court set January 15 and 16 as the dates for Sokha’s trial, more than two years after his arrest and the dissolution of the former opposition party. 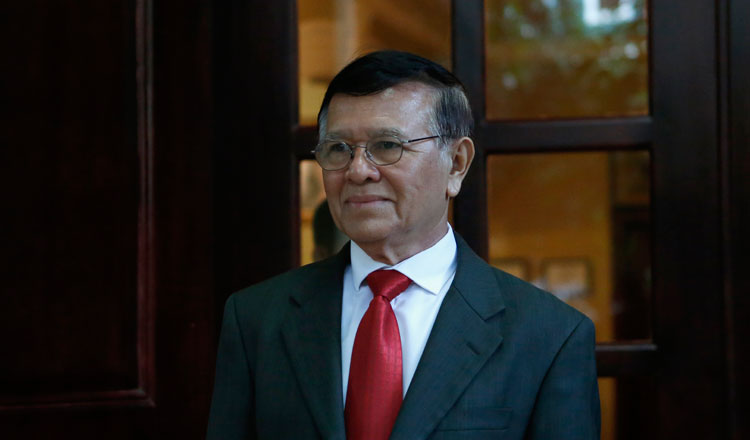 When asked to confirm whether Sokha’s trial is going to last for two days, Mr Kimlong said: “It depends on the hearing and the judges’ decision”.

General Sao Sokha, commander of the National Military Police, and General Neth Savoeun, chief of the National Police, are anticipating opposition groups gathering across the country, according to a document detailing security plans obtained yesterday.

Gen Sokha in the document said the authorities are ready to curb any fake news circulated on social media during Sokha’s trial.

“The authorities must stop people from gathering and prevent illegal movements that could disrupt security,” he said. “The authorities at all levels must identify opportunists, take timely legal action and gather all evidence.”

Mr Robertson said the European Union has raised concerns over Sokha’s case in the context of an ongoing review of the Kingdom’s Everything-but-arms trade status.

The European Commission in February launched a period of intensive monitoring and engagement that could lead to the temporary suspension of the EBA.

It said the government must restore democracy and rule of law while respecting human rights and fundamental freedoms, referring to the dissolution of the CNRP and the arrest of Sokha.