The Kingdom of Cambodia and the United States of America established diplomatic relations in 1950. This year marks the 70th Anniversary of the ties and the US Embassy in Phnom Penh launched this celebration on Wednesday, 8th January 2020 at the Futures Factory in Phnom Penh. To put emphasis on the significant contributions of the US to Cambodia, the US Mission has planned a 12-month scelebrations throughout 2020. In a speech, Ambassador W. Patrick Murphy highlighted the themes throughout the year-long celebrations to “reflect areas of sustained cooperation and commitment” which are: January-Agriculture; February-Youth, Education and Technology; March-Women and Gender Equality; April-Environment; May-Public Health; June-People to People Ties; July-Celebration of the 70th Anniversary; August-Humanitarian Assistance; Sept-Trade & Investment; Oct-Law Enforcement; Nov-Regional Cooperation/ASEAN; and, Dec-Democracy & Human Rights. The said event was graced by various local government officials, VIPs as well as students, members of international and local private organizations and NGOs. The program showcased local talents ending with a concert. The  highlight of the event was   the unveiling of a logo which symbolises the 70th Anniversary of the Cambodia and US relations.

Preceding the event during the day, US Ambassador Murphy led a parade of remorques throughout the main streets of Phnom Penh. 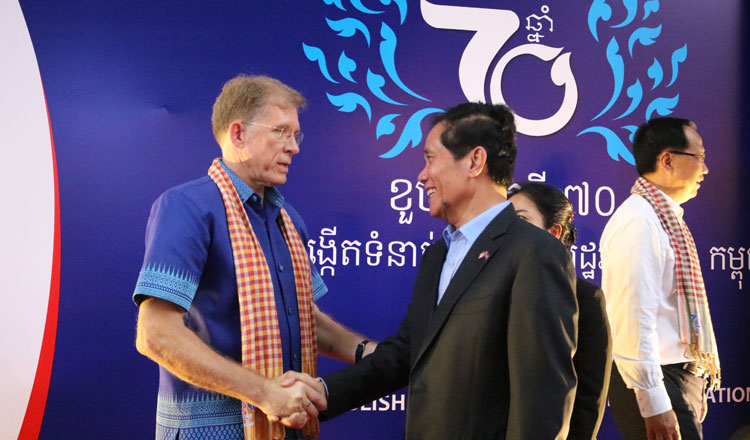