Chan Dara, Prey Khmum commune police chief, yesterday said that 33 people were on the bus, 27 of whom were foreigners, and they were travelling along National Road 3 from Siem Reap province to Preah Sihanouk province.

He noted the foreigners, including Russian and Czech nationals, were sent to the Kampot provincial referral hospital for treatment.

“So far, we do not know the reason for the accident because the driver and two assistants fled the scene, Mr Dara said. “We are now looking for them.”

He said police believe that the driver was feeling sleepy, noting that if he was he could have handed over the driving to an assistant. 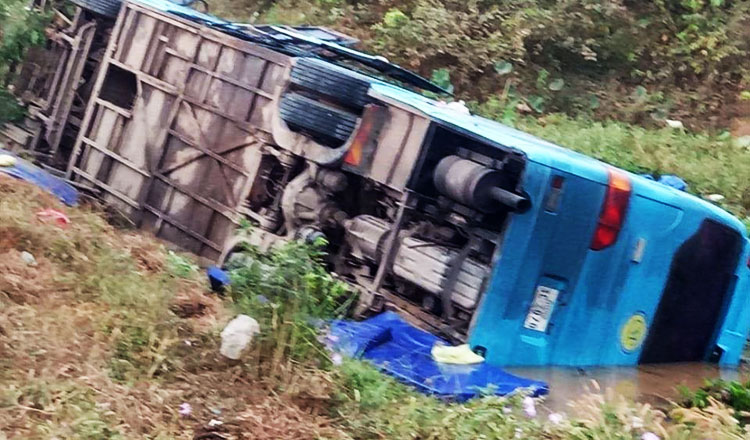 “From initial investigations, we suspect that the bus driver was overtaking a car in front of him and veered too much to the right and plunged into the ditch,” Mr Dara added.

A National Police report recently stated that last year, there were 4,121 traffic accidents throughout the Kingdom which caused the deaths of 1,981 people.

It said that 3,919 were seriously injured and another 2,222 suffered minor injuries.

The report added that the most common causes of accidents last year were speeding, flouting traffic rules and drunk driving. The majority of those who died were motorcyclists who did not wear helmets.