The Last of Phnom Penh’s Lakes

In the past two decades, Phnom Penh, the capital of Cambodia, has undergone rapid development. The growth, combined with increasing urban population and foreign investments, has led to a massive demand of lands and real estates, which in turn cause prices to soar. The city’s landscapes have been affected by these factors while many natural lakes in Phnom Penh have been filled in, or partially filled in, to make place for new infrastructures – from residential areas and satellite cities to commercial and recreation centres. However, there have been no comprehensive analysis of how urban development has impacted Phnom Penh’s lakes. Meanwhile, in its latest report, a poor community-supporting NGO warned that natural lakes in Phnom Penh are on the brink of disappearing, and if nothing is done, many will lose their homes and sources of income. Story by Taing Rinith.

The morning sun is blazing down Boeung Tamok Lake in the north western suburb of Phnom Penh. About ten boats are floating on the water surface, with fishermen casting their nets into the water and hauling them back into the watercrafts. Since last night, San Thoeun, one of the fishermen, has caught about 20 kilograms of lagoon fish and lake shrimps in his net, which his wife will later bring to sell in the market before noon.

“Most of our income comes from the fish here,” Thoeun, 32, tells Good Times2. “To be honest, I love working on this beautiful lake under the sun and in fresh air rather than go to work at the factories like most of my friends.”

“But, I don’t know how long I can keep doing that.”

Not far from the spot where Thoeun’s boat lies is a strip of land shooting into the river where an excavator was filling in some parts of Boeung Tamok with more soil brought in by several trucks.

With one hand blocking his eyes from the sun rays and carrying a sickle in another, Chun Sokheng, a 51-year-old lotus farmer, is looking at the machines with “a feeling of anxiety” about what would happen in the future. 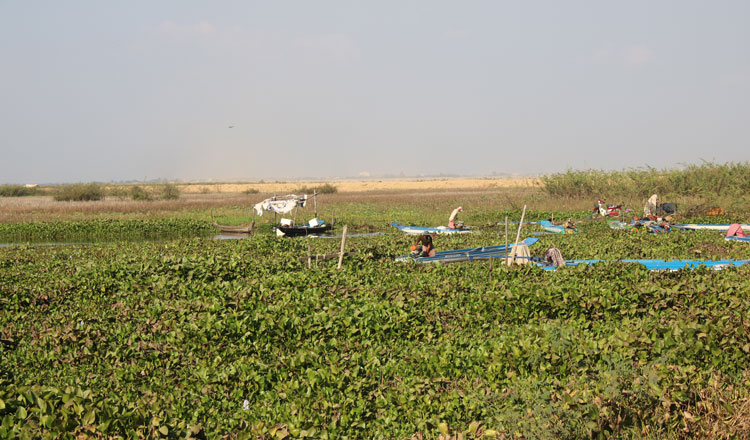 “Now they are partially filling in our lakes,” Sokheng says. “The filled-in part is getting bigger and bigger, and I think soon, it will reach where my lotuses are.”

On a riverbank, a small shack made from zinc sheets with newly sprayed words that read “to be moved”. Sokheng, as well as many other people, used to live in such a shack on the banks, but in January 2019, they received a letter from Prek Pnov authorities which ordered them to move out of the “state land”, but until now, there has not been any public forums discussing the fate of the lakes and surrounding lands.

“We are still allowed to fish and plant lotuses on the lakes,” Sokheng added.

According to a latest research by a local non-profit group, Boeung Tamok, the largest lakes in Phnom Penh by surface area, along with other lakes in the city, are indeed shrinking. If everything keeps going on like it is today, the report says, they will disappear, forever.

Entitled The Last Lakes, the findings are based on various research methods, ranging from questionnaires and desk reviews to mapping and impact assessments.

The study claims that as of 2019, 16 out of 25 lakes in Phnom Penh were filled-in while the rest have been partially filled. In addition, Phnom Penh witnessed the loss of 40 percent of its wetlands area. The main reason stated by the reports is the emerging of Borey, residential housing and satellite cities.

“All findings are specific and are largely informed by community members and satellite imagery meaning they are often not fully accurate and provide estimates,” the report said, adding that there should be more lakes that have not been assessed because of their small sizes.

“Historically, the lakes and wetlands have provided economic benefits to aquatic farmers and fishermen. As the city grows, both have come under increasing threats from developers who are keen to in-fill the lakes and create real estate to generate profit – sometimes at the expense of the local communities.”

The report also presented an analysis of Boeung Kak Lake, a high-profile example of how a lake in Phnom Penh is lost as a result of development.  After the Cambodian government granted 99-year lease to Shukaku Inc, 4,253 families who had lived for decades in the area were displaced, and we officially lost Boeung Kak Lake in 2013.

“In-filling of the lake led many homes to incur damage and flooding and led to some families leaving by necessity and without proper compensation,” said the report.

“Violence and intimidation were used against Boeung Kak families who protested against their evictions.”

The researcher also questions the legality of the in-filling. It cites Royal Decree N0 339, which set out the conditions that a state-public property has to meet in order to become a “state-private property” including not being in public interest, losing full functionality and not being used directly by the public.

“The reason we wanted to do this research is because we want to highlight what is happening, what are the current trends around the way that we plan in Phnom Penh,” says Issac Daniels, the American-Australian advocacy advisor and researcher for Samahkum Teang Thnaut who wrote The Last Lakes.

When asked about the repercussion of Phnom Penh losing its lakes, Daniels said the answer would highly depend on each lake’s unique functionalities. For example, Boeung Tamok provides a huge relief in Phnom Penh while Boeung Tompon and Boeung Cherng Ek play the important roles of treating the water​with convolvulus that people grow on their surfaces.

“The loss of the lakes will also make the city hotter and less beautiful, but at the end of the day, it would affect the people whose livelihood relies on the lakes the most,” Daniels says. “They are living on and selling the things they collect from the lakes, especially fish.”

“The social and environmental effects of this loss have been and will continue to be devastating with expected evictions, loss of livelihoods, increases in flooding, pollution of the environment and loss of biodiversity, should similar trends continue,” the report concluded.

“Development was needed for the city to grow,” adding that the flood issue in the capital is much better now than in the past. 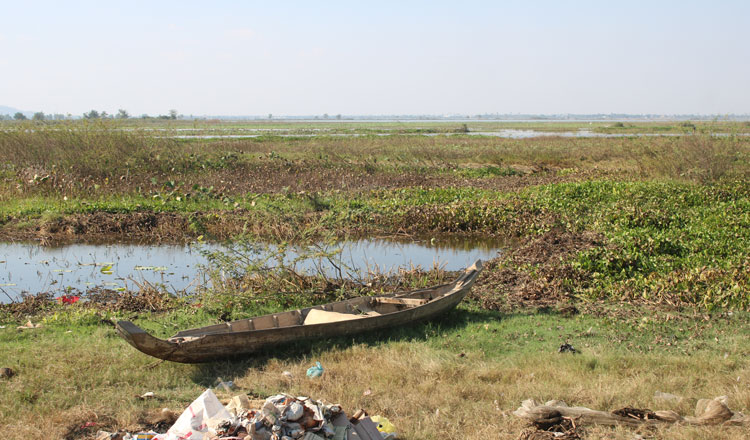 In response, Daniels, STT’s researcher, said whether the development compromises the loss of natural lakes depends on the weigh-in between the benefit and impacts.

“On one hand, maybe building more houses is good, but the problem is… there is not much housing for poor people,” he said. “The lakes are being filled in and given to rich companies and there are environmental impacts, but the housing is for rich people.”

“In fact, so far, we have zero housing for poor people on the lake,” he added.

Daniels called for more research and Environmental Impact Assessment (EIA) to be conducted and made publicly available online “for review in order to increase transparency” and consultancy to be given to citizens whose livelihood depends on the lakes, when the government is dealing with a big projects where lakes are involved.

Issac Daniels has been living and working in Cambodia for five years and during this period, he has fallen in love with the lakes in Phnom Penh especially Boeung Tamok, thanks to their aesthetic values. He claimed he could have fallen in love with other lakes which have been completely filled in as well.

“Boeung Tamok is very beautiful, and it is an example that could be turned into a tourist attraction,” Daniels says.

“There are also potential to have real estates on the side of the lakes. In a lot of cities around the world, for example, if a house is worth 10 thousand dollars, it would cost 20 thousand dollars if it is located next to a lake.”

He added that the lakes can make Phnom Penh much more beautiful and in a beautiful city, the businesses could be much better.

“You can create a tourism industry where people go to and see the lakes while also giving the local people a better life by providing places where they can go to relax, exercise and explore lives themselves,” Daniels said.

New Year celebrated by all