Nearly 1,500 orphans and students joined a football clinic organised by the Visakha football club and partners in the provinces of Banteay Meanchey and Battambang.

Visakha FC held the Banteay Meanchey event at the Tiger Son High School on Dec 27 in partnership with Prince Bank Plc, Union of Youth Federations of Cambodia (UYFC) and the provincial government of Banteay Meanchey province.

In Battambang, the event was held at the Battambang University on Dec 28.

There were 820 children who attended the charity football event in Banteay Meanchey, with another 610 present in Battambang.

During the two events event, the coaches and players of the club talked about their experiences and also taught the participants about football and techniques to improve their game.  The event was also an opportunity for the children to have their photos taken with the visitors. The team later donated some football equipment to the participants. 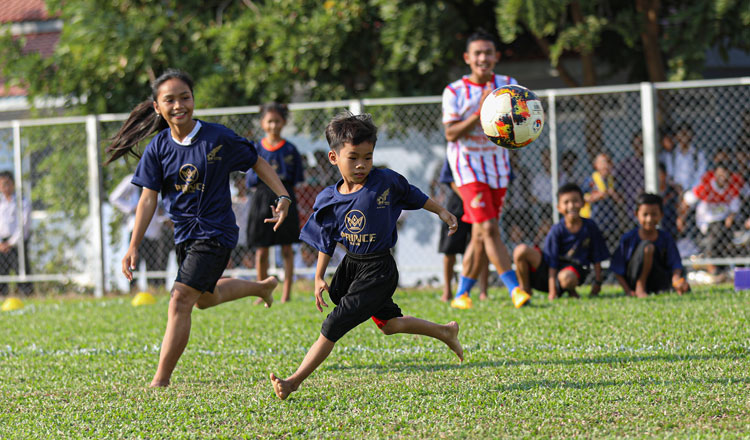 “The atmosphere was good. Everyone was happy to be part of it,” said a photojournalist present during the occasion.

Sar Sokha, UYFC vice-president, presided over the events, which was also attended by top provincial officials from both provinces, including Banteay Meanchey Governor Um Reatrey.

Founded in 2016, Visakha FC plays in the Cambodian League, the top division in the Kingdom. The team boasts of several top-notch talents, including forward Keo Sokpheng, who has carried Cambodia on his shoulders in many international competitions, including the recently-held 2019 Southeast Asian Games in the Philippines.

Also with the team is custodian Keo Soksela, who is considered to be one of the best goalkeepers in the country.

The event was held under the theme,” Share Football Love”.

Holding charity football events for children has become a tradition for the Phnom Penh-based football club.

In July 2018, the team conducted a football charity event in Prey Veng province, which was attended by several hundred children from five schools. Another football clinic was held a few months later in Battambang province.