Due to its great competency, it makes humans believe or rather fear job replacement by robots and Artificial Intelligence in the near future. In a report released in June 2019 entitled ‘How robots change the world’, it says that 20 million robots will appear by 2030 and will replace considerable numbers of human jobs.

Some 20 million in manufacturing jobs could be displaced by industrial robots by 2030 – which is 8.5% of the global manufacturing workforce, quoted the report.

It continues that tens of millions of existing jobs will be lost, with human workers displaced by robots at an increasing rate as robots become steadily more sophisticated. The report also says that people will see the nature of the jobs change as they are required to master new skills to collaborate with intelligent machines.

In Cambodia, where the education on technology change is not robust enough, adapting to change from advanced technology is a big concern. Short of reaching students in rural area, even  students in the capital are not well informed about the new technology trend. 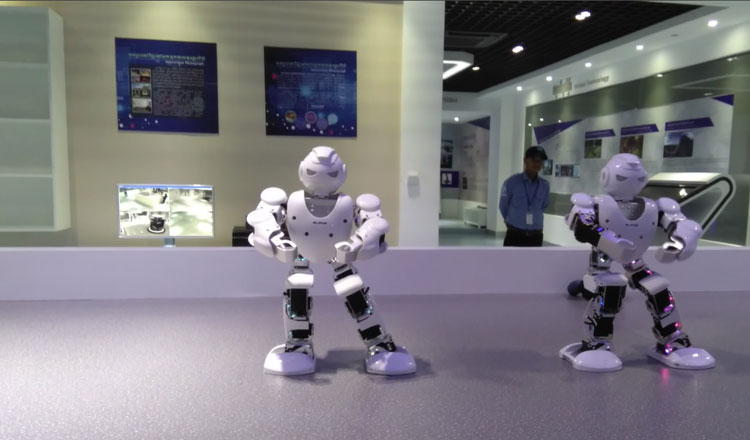 Every year, at least 110,000 students sit for the high school exam, meaning that they will soon after need to choose a major or skill in their career path. Currently, more than 110,000 positions are open for 2019, according to the National Employment Agency, similar to the total number of students who sat for the last high school exit exam. But there are more job opportunities available in the Cambodian job market if their ability can meet the requirements.

However, in order to match future job requirements, the young generation needs to be equipped with extra skills which is ‘technology and digital knowledge’ as the Industrial Revolution 4.0 will slowly enter your life in just a matter of time.

Actually, some platform of robots or automatic machines are already actively used in Cambodia for a few years now. For example, at shopping malls like Aeon Mall, parking ticket machines have been put in place to work instead of humans to print parking ticket for drivers. In some institutions or workplace, students or employees’ attendance have been recorded through an ID card scanning machine, or to track staff.

AI is unable to cover every type of human skills such as creativity, originality and initiative, critical thinking, persuasion and negotiation will likewise be retained or increase in value, as will attention to detail, resilience, flexibility and complex problem-solving. Emotional intelligence, leadership and social influence as well as service orientation also see an outsized increase in demand relative to their current prominence, said a World Economic Forum report entitled ‘Future of Jobs’.

Due to difficulty of the machine to replace the skill of human creativity, social intelligence and leadership, it will favour people who are equipped with these skills to get a better job.