Home - Mine, UXO casualties up 40 percent

Mine, UXO casualties up 40 percent

The Cambodian Mine Action Authority has reported that casualties increased this year by more than 40 percent when compared with the same period last year.

A CMAA report obtained yesterday showed there were 71 casualties from January to October due to landmine and unexploded ordnance incidents. Of them, 11 people died, 47 were injured and 13 had to undergo amputation.

“If compared with the same period last year, there was a 42 percent increase of casualties,” the report showed, noting there were 50 casualties from January to October 2018.

During that time, eight people were killed, 31 people were injured and 11 underwent amputation.

It said that from 1992 to October 2019, 1,910 square kilometres of land were cleared of landmines and explosive remnants of war.

“More than one million anti-personnel mines, 25,153 anti-tank mines and about three million items of ERW were found and destroyed,” the report said.

Ly Thuch, CMAA first vice president, said last month at the signing of a mine action agreement between Australia, UNDP and the government that regional and internal conflicts from the 1960s to late 1998 left Cambodia as one of the most landmine and ERW affected countries in the world.

He said that with support from the international donor community, the United Nations and development agencies, the government has been able to clear landmines and ERW contaminated land. 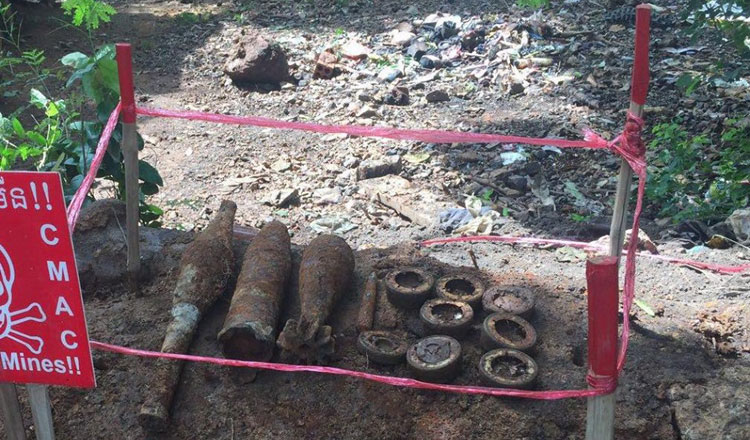 These now-safe lands opened up for productive uses and opportunities. Thousands of vulnerable and low-income communities benefited from the development, he noted.

“The government of Cambodia is committed to making Cambodia mine-free by 2025. We strongly hope that from 2026 onward, no Cambodian is killed or injured by landmines,” Mr Thuch said.

Mr Thuch said that to achieve a mine-free Cambodia by 2025, strong commitment is needed from international donors, the government, private sector and also individuals.