Anantara Angkor Resort honours the 50th anniversary of the first screening of the 1969 film ‘Rose De Bokor’, written and directed by King Norodom Sihanouk. Free-entry screenings will be held on Dec 7, Dec 24, and Dec 31 at 7.30pm in the hotel’s open-air courtyard.

The film, a historical drama, stars the King as Colonel Hasegawa from the invading Japanese army, alongside his wife Her Majesty Queen Norodom Monineath Sihanouk, in the role of a Cambodian-French woman with whom the Colonel fell in love.

The Queen Mother also starred in two other films in the 50 movies that the King produced.

The copy of Rose De Bokor screening at Anantara is from the Queen Mother’s private collection, and is the last known reel of any of the late King’s films.

Its screening is the result of the Anantara general manager Sarah Moya’s fondness of the King’s movies.

“We have always been a fan of the movies made by the late King Sihanouk. In the earlier days of The Sothea hotel,” she says. “We used to offer movie nights featuring a few films of the King we had found from various sources.

“I mentioned this to Marina Pok in one of our conversations. Soon after she gave me the news that HM the Queen has a copy of the ‘Rose of Bokor’ which will be celebrating its 50th year anniversary this year. That was how the whole event came up.”

The screenings at Anantara are also backed with a photo exhibit, ‘Swirling Clouds,’ featuring images taken during filming at Bokor Mountain in 1969.

Clare Crook headlines the exhibition, with her stark and at times confronting photos of the tsunami in Sri Lanka in 2004. She was caught up in the tsunami, and decided to make a photographic record of the aftermath and rebuilding process. 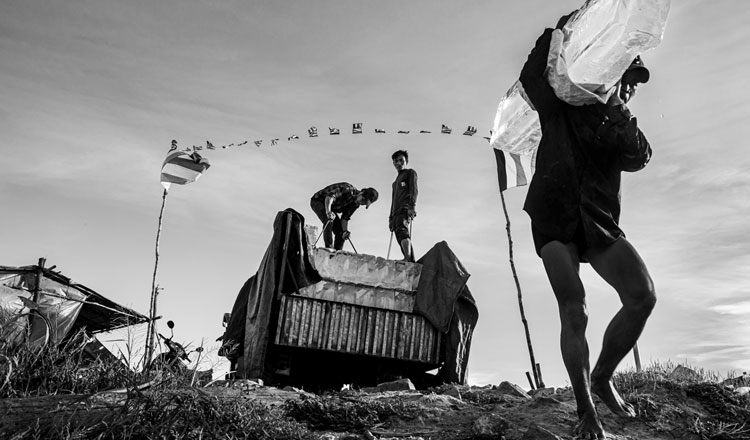 “It is an accident of birth that separates us from the millions of people living in acute poverty throughout the world and the answer is not a complicated one, Clare explains. “They need our help and we can give it to them.

“It is my hope that this exhibition will generate an understanding and compassion for a scarcely known country and the serious plight of its remarkable people.”

Clare is also an identity in Temple Town, and Tribe Art Gallery co-owner Terry McIkenny says, “She is well connected to Siem Reap and well known to us here at Tribe – we have observed her work in Sri Lanka which is remarkable.

“Clare is closely connected with the Ponheary Ly Foundation based here in Siem Reap. She also runs yoga retreats ‘Brave Fish’ to Cambodia every year, where the participants work with Ponheary Ly. Her daughter Daisy manages ‘Sister Srey café’ here in Siem Reap, an Apopo-owned business.”

Clare’s exhibition is complemented by the work of 19-year-old Sinang, an up-and-coming Cambodian artist who started out as a Sihanoukville street artist before moving to Siem Reap.

“It was important to Tribe to have a Cambodian perspective and involvement,” says Terry McIkenny.

“Sinang is a young emerging Khmer artist and this will be his first exhibition. We saw his paintings of fish, and commissioned a collection for this exhibition, to look at water and its life enhancing and sustaining qualities.” 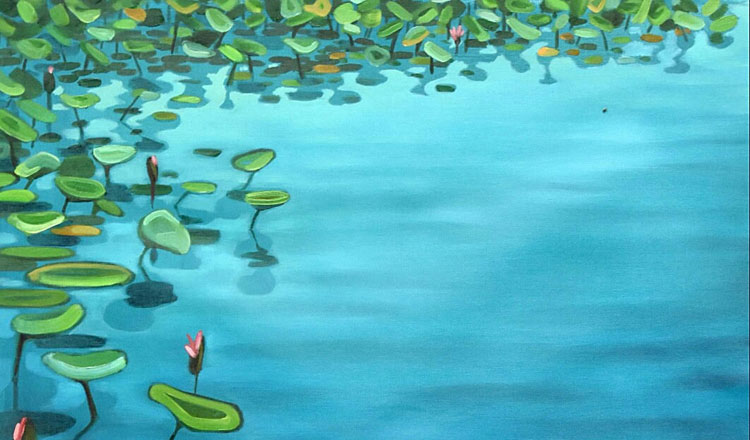 Kampot resident Simon Romain has exhibited widely and he brings depth to the Reflections exhibition, with his work on show ruminating on the serenity and calmness of water.

The water theme also features in a new exhibition at Mirage Contemporary Art Space that was launched on Nov 29, and coincides with the Mirage’s third anniversary and the first anniversary of the galleries new rooms.

The new solo exhibition, entitled ‘Our Village,’ features the work of Roun Ry, a self-trained photographer from Siem Reap. This startling exhibition runs until Feb 24, and documents the increasing hardships faced by the communities living on the Tonle Sap, where the lake and its ecosystem are under pressure from falling water levels, overfishing, and changing weather patterns. The fish are disappearing and this has impoverished the lake’s fishing communities. “When I first started documenting the fishermen living on the Tonle Sap lake, I had no idea that their lives were under pressure, Roun Ry says. “For me, the project was initially just a way of recording the lives of a community I knew little about.”

“I saw that they were constantly worrying whether or not they would be able to catch enough fish for the next day. Or whether they would have to think of another way to survive?

“I hope the viewers, just like me, can get a sense of how important human-nature relationship is for us Cambodians, particularly within the fishing communities.”

Lazing around at KOH PRAK a floating haven