A survivor of Monday’s deadly collapse at a construction site of a temple in Siem Reap province yesterday blamed the accident on the use of wooden scaffoldings instead of metal to support concrete work.

The temple building in Prasat Koukchak pagoda in Siem Reap city was under construction when it completely collapsed on Monday afternoon. The collapse killed three people and injured 16 others.

Phlong Chantha, 25, a construction worker who sustained injuries to his hands and body during the incident, said more than 20 workers were pouring concrete to build the roof but it gave way once the work was nearly finished.

“It started to collapse from the centre point first. I saw it happening and was about to jump but could not make it on time,” he said. “The debris buried me up to my head so I was able to breathe. I shouted for help and it took more than half an hour before I was rescued.”

Mr Chantha, who has four years of experience in construction, said that the collapse might have been caused by technical problems since wooden scaffoldings were mostly used in the building to support concrete work.

“I did not want to do it [construction work] at first, but because the construction supervisor asked me to help the monks, I later agreed,” he added. “I saw that the wooden scaffoldings used to support the concrete were thin [similar to wrist size] and there were very few metal scaffoldings being used.”

“Another thing is that the wooden scaffoldings had been left in the open for seven to eight months before they called us to pour concrete. Some of them might have decayed due to the sunlight and rain,” Mr Chantha noted.

Venerable Thy Sokhon, a monk at the pagoda who suffered leg and chest injuries, yesterday said that he had been watching the construction work when the building collapsed.

He noted that the foundation for the building was laid several years ago and pillars were installed last year.

Ven Sokhon said that due to a lack of budget, the project was temporarily halted. Work to put in a concrete roof only started a few days ago.

“I do not know how much money has been spent on this building,” he said. “We are constructing this building in stages because our pagoda does not have enough budget and depends on donations.”

Meanwhile, Siem Reap provincial authorities yesterday completed clearing the debris and confirmed that three people died and 16 others were injured.

Provincial Governor Tea Seiha said the debris was cleared by yesterday morning and no more victims were found.

“The number of victims is confirmed as 19, with three deaths,” he noted.

Hy Say, chief of Siem Reap’s department of land management, yesterday said he has been questioning Prasat Koukchak pagoda chief and conducting an investigation at the site.

“We are still conducting investigations and cannot ascertain the reason for the collapse yet,” he said. 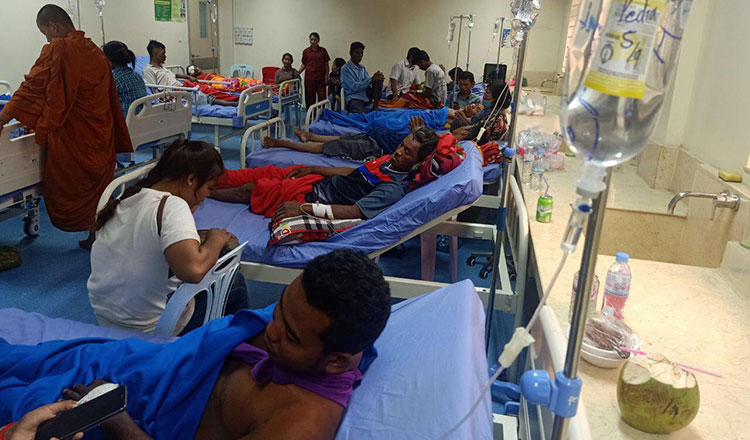 Prime Minister Hun Sen and his wife Bun Rany, president of Cambodian Red Cross, yesterday shared their condolences and donated about $5,000 to each family of the deceased and about $750 to each injured victim.

He urged the authorities to strengthen inspections of construction sites in the province to prevent a similar disaster from reoccurring.

“This case should have not happened here, but it has already happened, and it is very regretful,” Gen Banh said. “The authorities have to make an effort to prevent such an incident from happening elsewhere again in future.”

Gen Banh also donated about $500 to each family of the deceased and about $250 to each injured victim.

Seang Nam, a lawmaker for Siem Reap province, donated $100 to each victim and $300 to each family of the deceased. The Cambodian Red Cross also provided some food and money.

“We regret the loss of life because we could not save them. But we will try our best to treat the injured workers so that they could get better soon,” he said.

Deadly collapses at construction sites are a serious issue in the Kingdom. In June, a seven-storey building under construction in Sihanoukville collapsed, killing 28 workers and injuring 26.