Home - Defection for the sake of the nation?

Defection for the sake of the nation?

Kong Bora, a former CNRP lawmaker who had his political ban lifted in January, joined the CPP in October. While such a defection is usually construed as one seeking power or financial gain, Mr Bora –despite his appointment as an undersecretary of state at the Ministry of Interior – says he left the CNRP for the good of the nation. In an exclusive interview with Khmer Times, he also unveils the reason behind Sam Rainsy’s political failures.

KT: First of all, can you tell us briefly about yourself? And can you include your political career?

In 1995, I first participated in politics by joining the Khmer National Party. Then, in 1997, I joined the Sam Rainsy Party, led by Mr Sam Rainsy. In the election of the National Assembly for the 4th mandate, I was elected as a representative/lawmaker for Prey Veng province, a position which I served from 2008 to 2013. After Sam Rainsy merged with the Human Rights Party to form the Cambodia National Rescue Party, I still retained my position as a senior official of the party. In the election for the fifth mandate, I retained my representative seat from Prey Veng. After the dissolution of CNRP, I was one of the 118 senior members who were banned by the Supreme Court from politics. However, the National Assembly adopted an amendment which allowed the banned members of the outlawed opposition to reclaim their right to politics. And I applied for it, but I did not become a politician immediately. I just wanted to return to my post at the Ministry of Agriculture from which I suspended when I became a lawmaker at the National Assembly.

KT: Why did you decide to join the CPP amid the peak of tension between the opposition movement and Prime Minister Hun Sen?

Mr Bora: I was in a situation, in which I had not decided which political party I want to join. I just wanted to go back to my post. At the same time, the tension between Prime Minister Hun Sen and Mr Sam Rainsy became more heated than ever. As a former senior member of the CNRP, I thought I would not be separated from the plot to overthrow the government. When Sam Rainsy found and led Cambodia National Rescue Movement and then appointed himself acting President of the CNRP, I did not want to be relevant to the CNRP, especially while Mr Sam Rainsy was calling for people’s power and persuaded the army to turn their weapons against Mr Hun Sen, the legitimate prime minister of the country. In this context, I had only one choice [to join the CPP], and I cannot keep Sam Rainsy as my friend. I had to turn to Prime Minister Hun Sen, a real patriot who has been working so hard to maintain peace and stability while protecting the nation, religion, the king, the constitution and the Paris Peace Agreement. Joining the CPP is a right choice made on time.

KT:  Was there any pressure that forced you to join forces with the CPP?

Mr Bora: I did not receive any pressure. I was warmly welcomed.

KT: You have spent almost 20 years with the opposition party in your political career. Your family, especially your father, Mr Kong Korm, has close ties with the CNRP and Sam Rainsy. Is there anything that is upsetting or disappointing?

Mr Bora: I have no pressure from my family, nor have I bear any grudge against the other members of CNRP. I left the CNRP because I had seen that its leaders had committed treason from the beginning to the end. It’s so-called acting president Mr Sam Rainsy has insulted the King, attempted to incite the armed forces, caused chaos in the country and even called for a colour revolution.

KT: Don’t you think this is Sam Rainsy’s tactic to put pressure on the government to find a solution or mechanism that can bring back the CNRP?

Mr Bora: I think it was only a trick to quench his thirst for power rather than to bring good to the people. 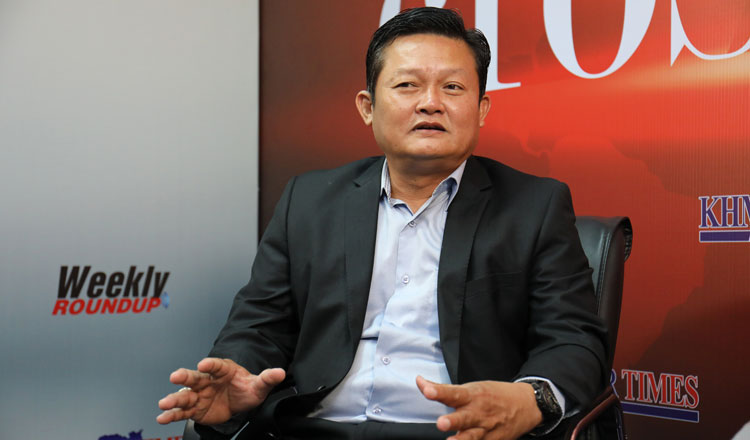 KT: Have you always had that thought, or has it just come to you recently?

Mr Bora: After the dissolution of the CNRP, I have seen the crime of treason, more and more obviously of Mr Sam Rainsy’s, possibly leading to violence and insecurity in the country.

KT: Does your defection cause any problems in your family?

Mr Bora: My two brothers and my father were also politicians, but we support different parties now. My father used to be with the CPP, but he was not pleased with the work of only some members and leaders in the party. Our Kong family must recognise the new political culture. We don’t make any Khmer person our enemy. I would like to ask the people in general to do the same. I want them to respect different political views and a fair competition with a new political culture.

KT: As a member of the CPP, how do you compete with your brothers? Mr Kong Saphea, who was once assaulted in front of the National Assembly building, still follows CNRP while Mr Kong Monika, another brother of yours, is now the president of the Khmer Will Party.

Mr Bora: I have a strong hope for my brother Kong Monika and his Khmer Will Party who have their own policies and have not committed treason. Meanwhile, Kong Saphea did not only suffer from assault but also a mental scar. He thought the CPP was the one who assaulted him in front of the National Assembly. He needs to recover from it first because he found the right path within the context of the new political culture.

KT: Did you join the ruling party in exchange for power and financial gains?

Mr Bora: Power and money is not important. I want to serve my nation through the CPP. I believe I can use my experience to prevent my former colleagues from being the shield and weapon of Mr Sam Rainsy for shedding the blood of Cambodian people.

KT: During the election campaign, you, as a member of the opposition, criticised the corrupt members from the CPP. Will you keep doing that, since you are now a member of the ruling party?

Mr Bora: Other members may find this answer hard to answer, but not me. I will not tolerate any act of corruption.

KT: What are you going to do to contribute to CPP?

Mr Bora: I will do my best in my work. I do not want to disappoint those who guaranteed my participation in the CPP, including H.E. Hun Manith and H.E. Sbong Sarath.  I believe in the leaders of the CPP, especially Samdech Kralahorm Sar Kheng and Samdech Techo Hun Sen. For CPP to trust me as a new member of the party, I need some time before I can be involved in the party’s activities.

KT: Are you facing any challenges as a new member?

Mr Bora: I don’t have any challenge, only the warmth from my appointment to the undersecretary of state of the Ministry of Interior.

KT: You have worked with both Kem Sokha and Sam Rainsy? How can you compare them?

Mr Bora: I started working with Mr Kem Sokha only after his party was merged with the Sam Rainsy Party, but I noticed that when he went on a mission to the province, it was easy to gather the people because they want to listen to Kem Sokha’s speech. Unlike Mr Sam Rainsy, he is more mature and modest. Mr Kem Sokha also listens to advice from all his colleagues. On the other hand, Mr Sam Rainsy does not listen to any of them except for a few elite members such as Mr Eng Chhay Eang and his wife, [Mrs Tioulong Saumura].