Nearly 600 workers of a factory which was destroyed by fire on Monday yesterday expressed concern that the owner may decide to shutter operations.

The factory, on a 7,300-metre site, is owned by Zhou Jianjun, a Chinese national.

Eam Samath, a worker, yesterday said they were shocked when they heard that their factory was destroyed in the fire. She noted that the workers were on holiday for the Water Festival.

“Although we pity our employer whose property was destroyed, we are worried that we will lose our jobs,” Ms Samath said.

Another worker Sok Dy said she did not know whether the company will rebuild the factory and continue operations or close it down. She noted that the fire would have cost the company significant losses.

“We also do not know whether the company will be able to pay our salaries because of its losses,” Ms Dy said.

She added that the employer is a kind person and the company did not exploit its workers.

“The company has never paid our salaries late or exploited us,” Ms Dy noted. “Unfortunately, the factory was destroyed by the fire and we are worried about not having jobs because it is difficult to find work immediately.”

Ung Kong Heng, the company’s chief of administration, yesterday said the employer feels sorry for the workers because of what happened to his factory. 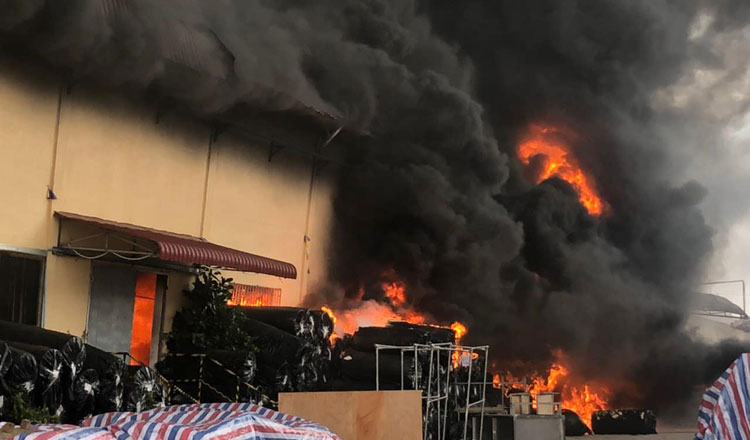 He noted that the company had not yet calculated how much it had lost because of the blaze.

“Our employer wants to rebuild the factory soon although the company has suffered losses,” Mr Ung said.

He added the company will rebuild the factory and continue to employ the workers.

“When they come back to work as usual, the employer will announce what the company plans to do next,” Mr Ung said. “We are sorry for the fire incident which damaged the company’s property.”

Colonel So Visal, Dangkor district police chief, yesterday said the fire was caused by a gas explosion and the flames spread rapidly.

“The authorities are sifting through the debris to find clues,” he noted. “Our initial finding is that the fire was caused by a gas explosion.”