This is highly recommended for office workers in Phnom Penh, who may have tried bungee jumping – except there are no strings attached here when you jump off a cliff. Yes, a cliff. But first you must want to escape the noisy, polluted capital very badly, as this enchanting place is quite a distance (180kms) from the city. Hence this escapade will suit the thrill-seeker, who sees travelling as a means to wake up their inner Indiana Jones. Taing Rinith, our wandering journalist, goes through hell and high water to discover Hoang Waterfall, a hideaway that not many people can reach. 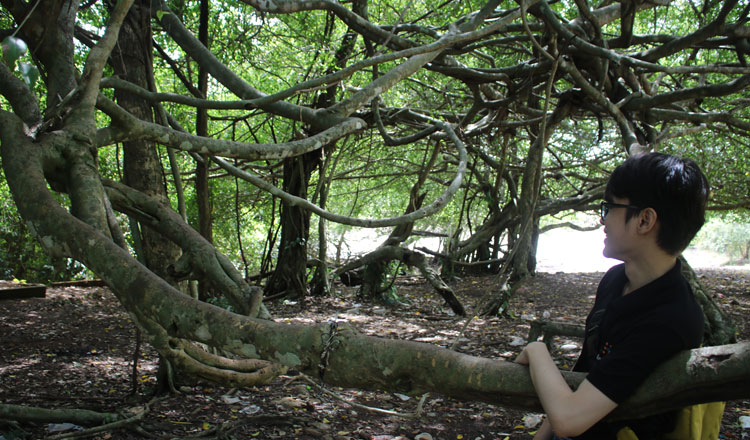 HOANG Waterfall was at one time in inaccessible jungle in Kampong Cham, home to only a few hermits and wildlife. Yet, it is now a popular tourist destination of the Tbong Khmom province, which was split from Kampong Cham in 2013. However, it is still quite tough to reach the waterfall even today.

To reach the destination, located on the border of Memot district and Tambe district, you have to travel some 90 km east of the provincial town. Leading to Hoang Waterfall is a serpentine dirt path which branches off from the National Road Number 8 and very desolate. So it is wise to go on a group tour to avoid getting lost.

It is also very narrow and bumpy, making it difficult to reach by car – not to mention the very slippery route during the rainy season. Despite this, it is the raining period that gives you the best view of the area’s stunning natural environment, including mountains, jungle, plantations and so on, which can well compensate for the long, uncomfortable drive, or dirtying yourself.

A real adventurer will not complain and even if you do, you will quit when you catch the wondrous sight of the waterfall complimented by a cliff, a rocky hill, a cave and surrounding tropical trees with tangled vines. It is one of the few places in Cambodia, where you can find a landscape with all of these natural elements in a freeze-frame not unlike a photograph.

Near the waterfall is a pagoda, where Buddhists often come to pray to the Lord Gautama’s statue and to seek blessings from a monk who lives there. According to Loy Chhat, the abbot of the monastery, years ago, Hoang had been entirely jungle until a monk named Prak Mony arrived there, and started turning the place tourist-friendly. 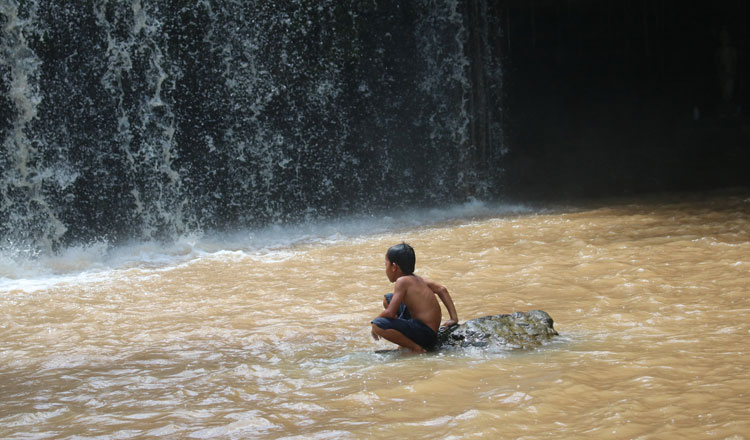 “People in the nearby areas have been visiting the place since 1997, but it was not only the past few years that the fall began to receive public attention,” said Chhat. “But the place is still quiet compared to other beautiful resorts in Cambodia.”

Huge trees stand around you holding a canopy a cool, undistracted picnic but be mindful to bring your own grub since not a soul is in sight selling sandwiches. Come prepared to start a small campfire for a BBQ, but snuff it out good – you don’t want to it to spread into the nearby jungle.

Hoang Waterfall’s thrilling feature will not allow your inner Indiana Jones to rest for long. You warm up to the task by taking a dive in the stream, the most natural thing to do when people come here on a hot day. Now, if you have plucked up enough courage (this is not a recommendation that you take the jump), a short climb up the cliff will get you to the top of the waterfall, where you are braced for that rush of adrenaline to jump down into the pool. The six-metre height will not hurt you, but if you are no daredevil, simply sit on a rock and dangle your legs in the icy cold, flowing water while watching the brave children instead, jumping off the fall “for sheer fun”.

“I am not afraid of such a height,” says Im Vibol, a 13-year-old boy who lives in the area, after his daring leap into space. “Tourists love taking pictures of me and my friends, and I also love showing it. They often give us money, which I can use to buy stationery.”

Stationary is not the next word – as you can also trek in the forest although it may not be a pleasant experience, since it is not as dense as before since many trees have been felled by whoever. You may run into some harmless wild animals such as squirrels, hares and wild birds. Caution here as plenty of wild fruit are ripe for the picking but always ask the local people first whether they are edible.

Another activity you must not miss is to explore the ‘hermit’ cave. It is a dark cave so deep that no one knows what mystery it could lead to. Like the name implies, people say it was once dwelled by the hermits who escaped the world for an ascetic life. Now, it is remodelled as a place of meditation for monks and the disillusioned seeking inner peace. Yet, you can spend around one hour in there for an exciting exploration, but never forget to bring a reliable flashlight.

Time flies and soon it is time to leave Hoang Waterfall. You have to leave before sunset because it will be another long way back, and you may not have time to see the breathtaking view from the hill when the sun sinks into the horizon unless you are bent on camping. No matter how upset you are with this: do not forget to bring your rubbish back with you because there is no rubbish bin here. To pollute such as a beautiful place is litter-ally sinful.

Can be tricky for couple coping with mood swings