Zarlequeens, a team from Reunion Island (France) topped the rankings after five matches to win the crown in the Old Boys Cup division of the 2019 Cambodia 10’s Social Rugby Tournament at Northbridge International School (NIS) on October 26.

There were six teams that competed in the Old Boys Cup. In addition to Zarlequeens and 2nd FABS, also competing in the category, which comprised of men 35 years old and older, are Roll Up, Roll Up; KL Tigers; Dirty Geckos; and XV Gaulois Rusties.

The six teams competed among themselves under a single round-robin format. The top two teams that emerge afterwards were adjudged as the winners.

In the Women’s Cup, it was the turn of the Sparky Rahus to shine. The team, which is composed of expatriates based in Cambodia, lorded it over the competition to win the top spot.

Second place in the women’s side went to AKL Aubigny, a team composed of Malaysians and Australians. 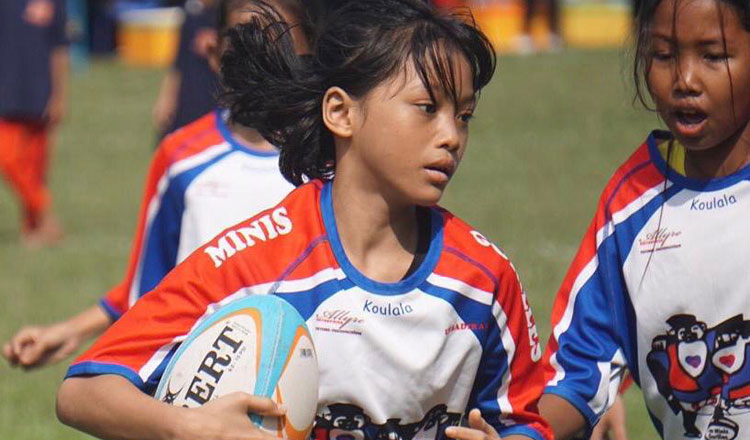 Third place was won by a local Cambodian team called Srey KB, while the fourth place went to Lady Geckos, a team from Vietnam. A total of four teams competed in the Women’s Cup side of the tournament.

All the winners from both categories received trophies and other awards from the event organizers.

The playoffs for the Men’s Cup were still ongoing as of presstime. A crowd of locals and expats were there to watch and cheer for their favorite teams.

Prior to the matches on Sunday, a children’s coaching clinic was conducted by sports educators from Kampuchea Balopp.

There were some tense and heated moments in the highly-physical matches. But generally everything went well, according to Anna-Maria Nugent of Kampuchea Balopp.

Kampuchea Balopp, the main event organizer, is a non-governmental organization (NGO) that focuses on youth development through sports. Currently, the organization provides access to sports activities on a weekly basis to more than 600 children from disadvantaged backgrounds or with a disability, and aims to double this within a short period.

Ms Nugent said they were happy with the way the tournament played out.

“Obviously, we got a higher turnout this year than the one last year,” she pointed out. Last year’s edition of the competition drew only 18 teams from Cambodia and outside.

This year, according to her, there were a total of 20 teams, including three from Australia and others from Cambodia, Vietnam, Thailand, France, Malaysia, and Singapore.

“I think the timing is good. Interest in the sport is high, especially with the ongoing rugby world cup,” she pointed out. The 2019 Rugby World Cup is being held in Japan.

“There were even teams from South Africa and New Zealand that expressed interest in joining, but unfortunately they could not make it,” she added.