The Interior Ministry’s Anti-Drug Department has seized 100 kilogrammes of crystal meth in Kampong Thom province, the second-biggest drug haul in the Kingdom.

Interior Minister Sar Kheng yesterday said police seized a total of 93 kilogrammes of the drugs during raids carried out from Monday till yesterday.

“Police arrested a Thai man and three Cambodians and confiscated about 93 kilos of crystal meth,” Mr Kheng said at a meeting on anti-human trafficking at the ministry. He added that according to the four suspects, the drugs were imported from Thailand into Cambodia through the Choam International Checkpoint in Oddar Meanchey province.

Mr Kheng noted that for nearly ten years, no drugs had been brought in from Thailand, but instead flowed out from the Kingdom.

“However, this time, this drug was brought in from Thailand into Cambodia,” he said.

Mr Kheng said that he had ordered National Police chief General Neth Savoeun to send the information to the Thai side as part of efforts to jointly crack down on drug smuggling.

On Monday, Interior Ministry police arrested the four suspects and seized 40 kilogrammes of crystal meth from a car in the province’s Santuk district.

According to a police report, two vehicles were inspected near a restaurant on national road 6 in the district’s Kokoh commune and police seized the drugs.

Police identified the Cambodians as Kong Vannak, 40, Sok Bunsereichai, 42, and Ly Toek, 53, and the Thai national as Sak Saesong, 32.

He said they found 53 packages of crystal meth weighing a total of 53 kilogrammes in three suitcases on Wednesday night.

Just hours after Mr Kheng spoke to the media, police recovered another seven kilogrammes of crystal meth which the suspects had hidden behind another house in the commune.

Maj Gen Kosal noted the four suspects will be sent to the provincial court today.

In June last year, Cambodian immigration police seized 120 kilogrammes of ecstasy during a raid on a passenger bus travelling from Laos into Cambodia, and arrested three Cambodian suspects.

The raid was made at the Trapaing Kreal international border checkpoint on the Cambodia-Laos border and 120 packs of the illicit drug weighing 120 kilos were found hidden in the bus. 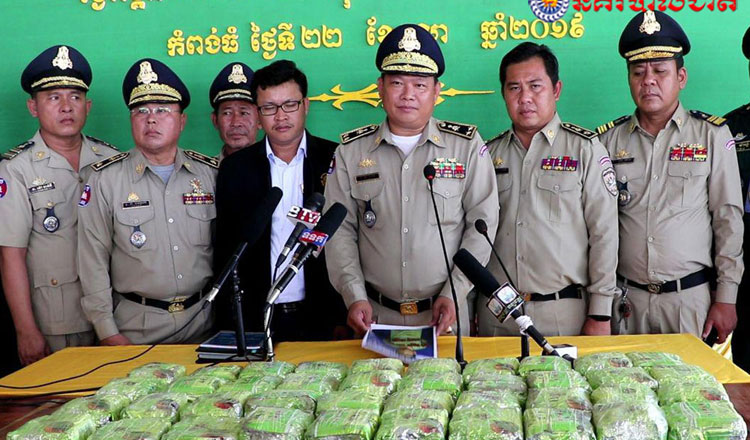 The haul was the largest-ever seizure of the drug in the Kingdom.

At yesterday’s meeting, Mr Kheng also urged authorities in the capital and provinces to educate people about the dangers of using drugs.

He said the drug case is a serious one and the Interior Ministry had successfully implemented strategies to combat the problem.

“If we do not crack down, confiscate drugs, and sentence suspects, this scourge will spread especially to the rural areas,” Mr Kheng noted.