Interior Minister Sar Kheng yesterday praised traffic police officers for the good work they are putting in and urged the public to value their efforts.

Speaking at a meeting in the ministry, he said traffic police officers are working hard both day and night to ensure road safety, but some people do not appreciate what they are doing.

“I want to praise all traffic police officers who work hard under the hot sun or in rain during the day and night,” Mr Kheng said. “But I see that some road users do not value their work.”

Mr Kheng said traffic police officers educate the people on traffic laws and everyone has to obey these laws.

He said the road users must respect the laws or face action if they abuse them.

“All kinds of people, whether rich, poor, high ranking or lowly-ranked officials, must respect and follow the laws,” Mr Kheng noted. “The laws were created for everyone to ensure road safety.”

He said that he sometimes faces rude words from motorists when he stops them for committing an offence. 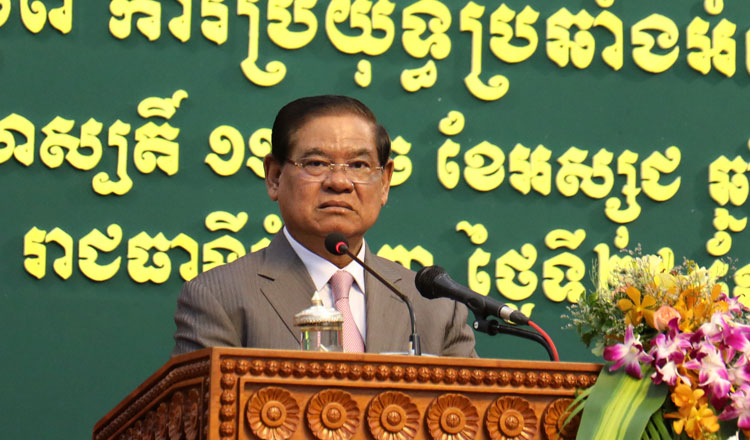 “I am doing my job and sometimes I get scolded by some road users while others understand that I am only carrying out my duty,” he said. “I stop motorists to fine them or to explain them how they had broken the traffic laws.”

Mr Sovanthy said it is the duty of traffic police to advise road users to respect the law and protect their lives while travelling.

“Sometimes, I get angry when some motorists do not understand the traffic law and accuses us of wrongly fining them however much we try to explain to them,” he said. “I am happy and have more zest to continue doing my work after hearing the praise from the minister [Sar Kheng] who understands our work as traffic police officers.”

Phnom Penh citizen Ros Narith, 24, yesterday said he had been stopped on three occasions by traffic police officers on his way to school.

He noted that he was stopped for either not wearing a helmet or driving his motorbike in the wrong direction.

“Once, I was angry with them when they talked rudely to me but I did not argue with them,” Mr Narith said. “I was just unhappy and left.”

He noted that while he knows how hard traffic police officers work and the difficulties they sometimes face, especially during traffic jams, he hopes they will be calm and be polite to travellers who have done wrong.