Defence Minister General Tea Banh yesterday urged superpower countries to treat the Kingdom as an equal rather than criticise its human rights and democracy records.

He was speaking at a plenary session on “The Interests of Small and Medium-Sized Countries and Common Security” during the 9th Beijing Xiangshan Forum in China.

Gen Banh noted that small and medium-sized economies often have to follow the dictation of superpowers in order to survive. “Specifically in the case of Cambodia, despite what the Royal Government of Cambodia has tried to do to benefit of our people and for our national interest, we still get pressure from some countries who criticise us on human rights, freedom and democracy,” he said. “Small and medium-sized countries are often forced to sacrifice their interests for superpowers.”

Gen Banh noted that because the world is interdependent, no country can afford to become isolated because this would be counterproductive to growth.

“But as soon as we open up to the world, we are forced to deal with superpowers, and generally not on equal terms,” he said.

Gen Banh said another challenge that smaller countries face is having to balance their national interests with the need to adhere to certain principles set by superpowers to define international relations.

He added that in order to mitigate the risks and overcome such challenges facing small and medium countries, the Cambodian government has a policy of strengthening internal reforms and expanding international relations based on the principles of sovereignty and independence.

“Increasing the number of international friends, including supporting international organisations and institutions, is one way in which small and medium-sized countries can overcome these challenges,” Gen Banh noted.

“This means we have to avoid maximising our interests at the expense of others,” Gen Banh added.

He noted the large number of events jointly organised by China and Asean to boost cooperation.

“China treats all countries on equal terms and provides unconditional aid regardless of whether a country is big or small,” Gen Banh said. 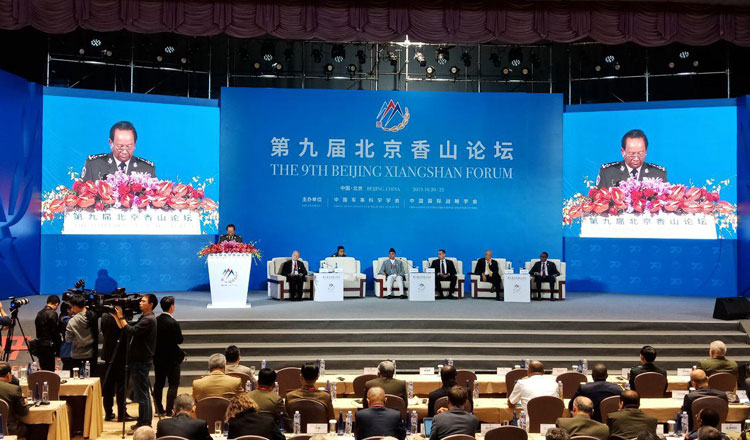 He noted Prime Minister Hun Sen’s recent assessment of relations with China when he said that even though China is a big and developed country he could still work with Chinese leaders on equal terms.

Kin Phea, director-general of International Relations Institute at Royal Academy of Cambodia, yesterday said that he agreed that small and medium-sized countries are facing pressure from superpower countries. He said that the US always uses its influence to put international pressure on small countries and meddles in their internal affairs under the pretext of human rights issues and democracy.

“The US, unlike China, has used human rights, democracy and rule of law as a pretext to meddle in the internal affairs of small-sized countries,” he said. “China uses its power by providing aid to develop such countries and avoids criticising or meddling in their internal affairs.”