Defence Minister General Tea Banh yesterday ordered the Royal Cambodian Armed Forces to prevent a coup allegedly being planned by Sam Rainsy for his return to the Kingdom next month.

Gen Banh made the order in front of National Military police commander General Sao Sokha, army commander Lieutenant General Hun Manet and senior RCAF officials during a military parade marking the anniversary of the establishment of the army’s Brigade 70 yesterday, when tanks and soldiers were displayed in a show of strength and unity.

Mr Rainsy, who is currently in exile, announced his planned return for November 9 and has called on citizens to mobilise and partake in his “nine fingers” campaign. The move is considered a coup plot by the government.

Gen Banh said the coup is being led by Mr Rainsy and backed by foreigners to cause instability in the Kingdom.

“We have already decided that they crossed the red line. The attempt is being led by Sam Rainsy and his people. We must enforce the law on those people,” he said. “We have no choice but to prevent the coup and crack down on activities that aim to cause chaos and [compromise] security and peace that we fought for.”

Gen Banh noted that the armed forces and the government understand that Mr Rainsy is not attempting to save the Kingdom, but is plotting to overthrow the government.

“Sam Rainsy is coming to arrest Prime Minister Hun Sen as we enjoy peace in the country,” he said. 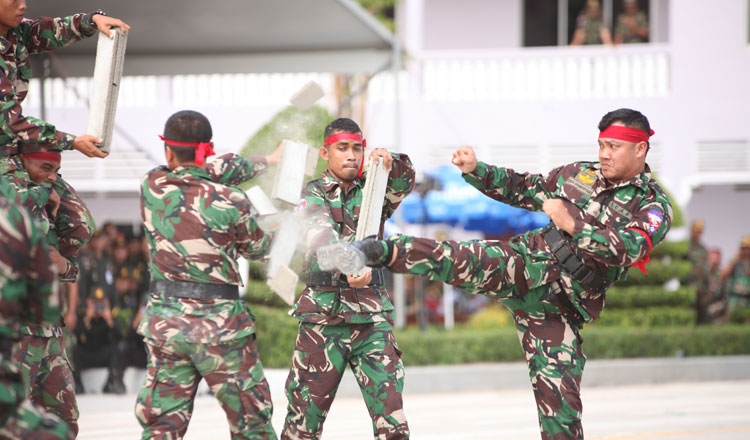 Gen Banh said anyone who supports Mr Rainsy’s plan will be arrested.

“What he is doing is not freedom of expression that is in line with the constitution,” he said. “He called on the armed forces to turn their guns against the government and insulted the King so we can’t let those people fulfil their ambition.”

“It is necessary for RCAF to take action against incitement that affects security – we have to take measures immediately,” Gen Banh added.

“I have to announce that the Royal Cambodian Armed Forces is committed to safeguarding the nation, religion and King,” Lt Gen Sophann said. “RCAF will protect the legitimate government to maintain peace and political stability. We will do this by respecting the order and eliminating those who are attempting to destroy peace.”

Mr Mong Hay said there is no need for the armed forces to mobilise and arrest Mr Rainsy.

“It is irrational to mobilise the whole of our armed forces and other forces in the nation to handle Sam Rainsy’s return,” Mr Mong Hay said. “A reasonable person would be opposed to such deployment of our army to do the job a handful of our law enforcement officers can easily do.”