October 10, 2019 marks the 40th anniversary of Cambodia’s central bank, the National Bank of Cambodia (NBC). Here, we provide a thorough question and answer session with His Excellency Chea Chanto, the Governor of NBC, ahead of this prestigious anniversary.

Since you were first appointed to be the governor, what were the main challenges that you faced?

H.E. I was appointed by the government as the governor of the National Bank of Cambodia in 1998, moving from being a minister of Planning. At the time, the banking sector faced some major problems:

Up until now, how have those challenges been tackled from the time you were appointed as a governor?

H.E. Up until now, the banking sector has been developing rapidly and actively contributing to the economic growth and poverty reduction. In the past two decades, riel stability has been maintained at around 4,035 riel per US dollar on average which has contributed to price stability with a low inflation rate maintained at around 3.5% and maintaining great macroeconomic stability. The trust on riel has been strengthened gradually through the implementation of supporting measures by the government and the National Bank of Cambodia in which the amount of riel in circulation has increased by 16% on average. However, the high level of dollarization demands the participation of all relevant stakeholders to promote the use of riel more effectively. The National Bank of Cambodia has also developed monetary policy tools based on the market mechanism such as Negotiable Certificate of Deposits (NCDs) and Liquidity Providing-Collateralized Operation (LPCO) while the interbank, monetary and foreign exchange markets are being developed.

New financial infrastructures in the payment system are being developed such as: National Clearing System, FAST payment, Cambodian Shared Switch, Online Banking System, Real Time Gross Settlement and Bakong project. Nowadays, around 4 million people are using payment services in both local and international settlements, in line with the economic development and technological innovation which also help to promote financial inclusion.

What is your vision and target/goal for the NBC as the central bank is celebrating 40 years of its re-establishment?

H.E. The NBC has undergone many development stages successfully with the support of the Royal Government and in the context that Cambodia has maintained peace and political stability under the wise and long-term vision of Samdech Techo Prime Minister. For the future, as a monetary and supervisory authority, the NBC will continue to fulfill our primary missions in conducting monetary policy and developing the banking system aimed at maintaining exchange rate, price, macroeconomic and financial stability to support sustainable and inclusive economic growth. In this regard, the NBC will continue to focus on developing an efficient banking system by fostering competition and enhancing customer protection as well as promoting financial inclusion and financial literacy to the public. Aiming at promoting financial literacy, the NBC has established the Economic and Monetary Museum Preah Sri-Īśānavarman to help our youth better understand the history and importance of the country’s economic and monetary development.

In line with financial technology advancement and economic development, modernizing the payment system for both the retail and the large payment settlements is also an important priority for further development to provide safe and effective methods for facilitating payments in trade activities, accelerating cash flows in the economy, strengthening financial stability and reducing transaction costs of settlements and transfers. To improve the effectiveness of monetary policy, the NBC will continue to promote the use of Riel based on market mechanisms and promote the development of a more active and efficient interbank market. In addition, the NBC will continuously develop human capital development in accordance with the rapid economic and financial sector development as well as regional and global integration. 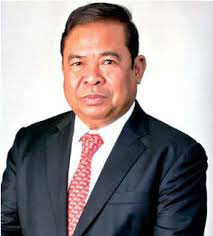 Do you support the idea of freezing commercial banks’ licences, especially standalone banks, and promoting rationalization and merging banks to cut down the number of banks that now exceed the people’s needs?

H.E. Licensing of banking and financial institutions is conducted on the basis of qualifications and in-depth analysis, especially on the reputation, experience, and capital of the applicant institutions. As the banking sector has progressed so fast and become interconnected, licensing therefore has been conducted strictly to ensure the robustness of the banking sector. After all, the presence of big banks in Cambodia is an expression of confidence and an opportunity for business expansion in the banking sector. The NBC, as well as the Royal Government of Cambodia, always encourages foreign direct investment, especially to attract large investors, both locally and globally. So far, Cambodia’s banking sector has received direct investment from major banks in Europe and Asia. At the same time, the NBC supervises, monitors, and evaluates the business activities and risks regularly to ensure that the banking and the financial institutions strictly comply with the laws, regulations, and prakas of the National Ban
k of Cambodia.

Is the presence of com-mercial banks in the rural area effective? And is this a policy that the governor will review so that the bank can reach anywhere in the country and improve financial education?

H.E. The National Bank of Cambodia encourages banking and financial institutions to provide financial services throughout the country to serve the needs of the people who can afford financial services. Generally, financial institutions that provide banking services have different business models. Most banks focus on large loans located in Phnom Penh and major cities, while MFIs focus on rural operations. So far, microfinance deposit has been providing a good range of small loan and deposit services which has contributed significantly to the country’s financial inclusion in the rural areas.

The central bank must not only adapt to changing conditions, but also prepare for the upcoming changes, as well as its approaches to implement the monetary policy and financial stability. What is your point of view on this matter?

H.E. The current economy is complicated and uncertain. In this situation, the National Bank of Cambodia has put in place the macro-prudential and micro-prudential measures to maintain financial stability and in particular, enhancing the role of banking sector in strengthening resilience, stability and economic development.

The NBC has strengthened its supervision by using risk-based supervision and forward-looking approaches and other regulations in accordance with international standards. Credit information sharing system will be strengthened and expanded which currently includes information on individuals and companies. We have also prepared a report on the financial stability to analyze the stability of the financial sector and assess the main challenges and risks in the financial sector. On the other hand, NBC has promoted the effective monetary policy through the use of riel, the development of monetary policy instruments based on market mechanisms and interbank and exchange market development.

If our economy were to fall into recession or there is an instability of Khmer Riel, what plan would the NBC adopt to stimulate the economy?

H.E. The National Bank of Cambodia has a high level of international reserves which are sufficient for conducting this intervention effectively. In these past few years, the National Bank of Cambodia has been maintaining riel stability successfully and will continue implementing policies that promote the use of riel in order to further encourage the public as well as all companies and enterprises to use riel more comprehensively.

What is your view on the role of the NBC in facing the challenges of developing the interbank market while maintaining financial stability?

The NBC, as a regulator, needs a specific reorientation by moving from a focus on law enforcement and regulation to protection and with the public policy shifting its focus from institutions into market and services. Could you please comment on this?

H.E. Of course, with the rapid growth of banking and financial services, we also need to pay attention to the potential risks. Therefore, in addition to introducing macro-prudential and micro-prudential policies to banks and financial institutions, we also regularly monitor financial products and services in the market, as well as introduce financial literacy programmes to the public to make them less vulnerable to potential risks arising from the use of financial services.