Major Neang Noeun, district deputy chief, said that they were previously suspected of selling drugs at guesthouses or nightclubs in Kampong Cham province.

Maj Noeun noted that they were arrested at about 3pm on Tuesday after provincial anti-drug police and the provincial court prosecutor raided a rental house in Kong Meas district’s Kang Tanoeng commune.

He added that before the crackdown, at about 2pm, an undercover police officer posing as a drug dealer had contacted one of the suspects to purchase drugs from.

Maj Noeun said that during the transaction, officers deployed to the location moved in to arrest the suspects. 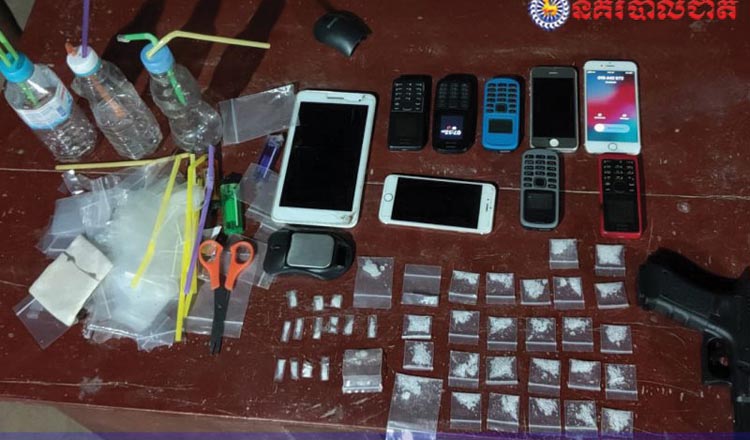 “They were caught red-handed after provincial anti-drug police raided their rental house,” he said. “They were arrested with evidence while they were selling the drugs to the undercover police officer while others were smoking inside the house.”

Maj Noeun said that after the arrest, police seized over 41 packages of methamphetamine, one scale, nine phones, one motorbike, one gas-powered pistol and other drug paraphernalia from them.

He added that the suspects also tested positive for drug use.

Maj Noeun did not release the identities of the suspects, saying that police are still working on the case.

Major General Em Kosal, provincial police chief, yesterday said that police are accusing the men with drug use and trafficking.

“Police are still questioning them,” he said.

Maj Gen Kosal added that they will be sent to Kampong Cham Provincial Court for questioning after police have finished their investigation.