According to a five-page letter signed by Mr Hun Sen last week and obtained by Khmer Times yesterday, the Prime Minister asked the King to “end the Oknha titles” of the senior RCAF officers.

“Based on the recommendations from Deputy Prime Minister and Minister of Defence Tea Banh…on ending the Oknha titles of senior officers at the Royal Cambodian Armed Forces, on behalf of the Royal government of Cambodia, I wish your high permission to end the titles of 75 senior RCAF officers,” Mr Hun Sen said.

The title holders include General Neang Phat, a Defence Ministry secretary of state, General Khun Vuth, and General Chao Phally, both undersecretaries of state at the ministry. 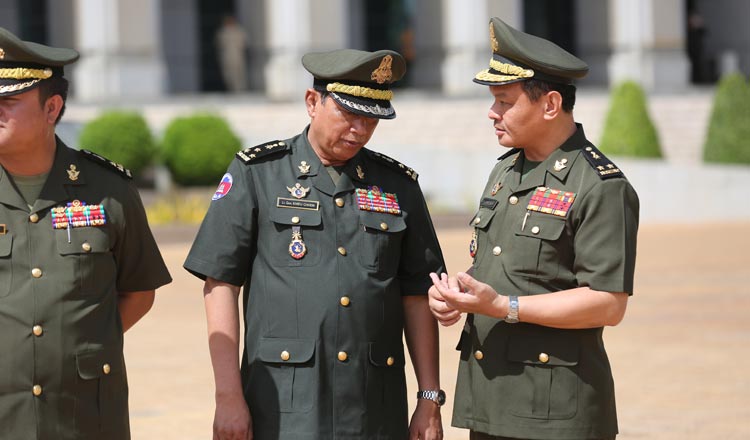 King Sihamoni is currently in China , meaning the request goes to acting head of state Say Chum for approval.

Man Bun Neang, Senate spokesman, yesterday said he did not know if Mr Chum has signed a royal decree to end the titles yet.

“It is Samdech’s [Mr Chum] decision and Royal Palace affairs,” he said.

In August, Mr Hun Sen ordered members of the military and police forces holding the honorary title Oknha to choose between their state positions or private titles in a move that government officials said was aimed at avoiding conflict of interest.

Defence Minister General Tea Banh previously said that the majority of 99 tycoons identified had given up either their titles or their government positions.

“I ordered all command headquarters to survey all RCAF officials,” Gen Banh had said. “We only keep our positions. If they want to keep their Oknha title, then they will need to give up their military rank.”

General Khieu Sopheak, spokesman for the Interior Ministry, previously said the ministry had identified 33 tycoon title holders working in a dozen high-ranking departments, including the National Police, but only one had agreed to give up his or her tycoon title.

Contacted yesterday, Gen Sopheak said that after a recent meeting with Interior Minister Sar Kheng to discuss the issue, more tycoon title holders in the ministry were identified.

“Before, we had identified only 33, but now the numbers have increased, including those who decided to give up their tycoon title,” Gen Sopheak, “But I cannot tell you the specific number right now because the ministry is still checking the list.

Political analyst Hang Vitou yesterday said that he supports Mr Hun Sen’s action to request for the removal of tycoons in the armed forces.

“It is a sensitive issue when those who hold the tycoon title and the rank of general, work in a government position as well as attend to their own businesses.” he said. “Those who hold both titles could easily commit corruption and lose public confidence in their ability to do their work professionally.”

“This action is good for our leadership system,” Mr Vitou added.

Sar Kheng in Germany to gain insight on deliverables