Fishermen in the village of Ung in Preah Sihanouk province are facing uncertainties about the future of their trade. While profit comes amidst an increase of demand for ocean products, the livelihoods of many fishermen and traders working here are threatened by overfishing and illegal fishing.

Prey Nop district, Preah Sihanouk province – In a small amphibious house located on a bank in Ung village, Lay Run and his wife kneel as they pray for good health, happiness and wealth.

The Hungry Ghost Festival is coming up and the 52-year-old fisherman has been stocking a few kilograms of crabs. But, he is not reserving any of his catch this week for the special day.

This year, the family will feast on noodles and pork as Mr Run’s catch is sold off to Chinese nationals in Sihanoukville.

“An influx of Chinese nationals in the province has tripled the prices of crabs,” Mr Run says.

Provincial Hall said in a report in February that more than 70,000 Chinese investors and tourists flocked to Sihanoukville so far this year alone, adding that they will bring positive influence on the economy.

An increasing seafood demand by Chinese nationals is good news for fishing communities who have lived on the edge of poverty, but many in these communities say overfishing and illegal fishing will hurt future generations and change their lives forever.

Kong Vanlin, a 20-year-old crab trader in the village, says she and her mother have been busy collecting crabs from cages set up by fishermen under their amphibious home.

Ms Vanlin says the influx of Chinese nationals in Sihanoukville increases the demand for crabs, but the signs of overfishing are already apparent.

“I have noticed that crabs have gradually decreased as the market demands increased,” Ms Vanlin says. “Before, I was able to buy up to 100 kilograms from fishermen, but today I can only buy up to 20 to 30 kilograms.”

She says that because supplies are low, her family has increased their buying price to attract more fishermen who can supply her family with crabs. Her family also provides loans to fishermen.

“Sometimes, we give loans to fishermen and they give us their crabs,” she says.

She notes that her family buys crabs in three categories: $11 for a large crab, about $6 for a medium one and about $4 for one that weighs less.

Ms Vandin says her family earns $2.50 in profit per kilogram of crabs sold in Sihanoukville.

A crab vendor at the Phsar Loeu market in Sihanoukville who goes only by Kea says the influx of Chinese nationals began at the end of 2017 and early 2018. Ms Kea says supplies of crabs have since doubled and so have prices.

She says she is now able to sell large crabs for up to about $20 per kilogram on a normal day, but the price could increase near public holidays.

However, increasing demand also poses problems for many of the fishermen.

Mey Sambor, a 49-year-old fisherman running into his neighbour’s house to avoid rain, says his family is happy to see how much money he can bring home from catching crabs, but fishing equipment is also getting more expensive.

“These days, one day of fishing in the ocean can only support my family for one day,” he says, adding that illegal fishing and overfishing play important roles in the dwindling supply of sea products.

In March 2014, the European Commission banned all fish imports from Cambodia, Belize and Guinea. It said the move was done because the three countries failed to show genuine commitment in tackling illegal fishing. It was done after repeated warnings to curtail the practice of illegal fishing by non-Cambodian vessels flying the Cambodian flag.

The move made many fishermen in Ung village unable to export their yields to Europe, but they are blaming Vietnamese fishermen for overfishing and illegal fishing in Cambodian waters.

They say Vietnamese fishermen use noticeably different boats, equipment and workers. They also accuse local officials of taking bribes to allow illegal fishing by the foreigners.

“Cambodian fishermen fish to support their livelihoods, but those foreigners conduct large-scale fishing,” Mr Sambor says. “At first I wondered why those foreign fishermen can come here, then I learned that our fishery authorities allowed them and turned a blind eye for their interests.”

Mr Run, the 52-year-old fisherman, says many in the village blame the authorities for not taking action against Vietnamese fishermen.

“I have noted that crab yields decline every year due to illegal fishing and overfishing,” he says. “Most of the bad fishermen are not from here – they are outsiders who have big boats and use illegal equipment.”

“If this continues, I don’t think my family will be able to survive poverty,” Mr Run says. “I earn less than $20 per day now – even before when prices of crabs were low, I was able to earn up to $100.”

He adds that the authorities must enforce the law and prevent illegal fishing.

“If the fishery department and other authorities can reduce or eliminate foreign fishermen, I think our fishing tradition will survive,” Mr Run says, adding that Vietnamese fishermen have destroyed or stolen 50 of his traps. “Sometimes they remove our nets and sometimes they destroy our traps.”

Om Savath, executive director of the Fisheries Action Coalition Team, says it is overfishing and corruption that hurt fishing communities.

He says the authorities must strengthen law enforcement and call on neighbouring countries to cooperate in their efforts to curb illegal fishing.

“Fishery crimes still happen and fishermen from neighbouring countries always crossed the [maritime] borders to conduct illegal fishing,” Mr Savath says. “It’s not only just happening now, but it has been happening for years.”

“Neighbouring countries should just work together to enforce the law within their territories to stop their fishermen from entering Cmaboida’s maritime borders,” he adds. “If we respect each other and cooperate, then we can save our marine resources.”

Eng Chea San, director-general of the Fisheries Administration, says that the authorities have cracked down on 1,928 fishery crimes across the Kingdom so far this year. Mr Chea San said it also destroyed more than 750,000 metres of fishing nets.

He says fishery crimes still occur, but figures have decreased because the authorities have been enforcing the law.

“It’s difficult to stop those [Vietnamese fishermen] because the maritime territories are big,” he says. “Those fishermen come to our sea and return to their territories.”

“We lacked equipment to use during crackdowns, such as speed boats. Our boats are old,” Mr Chea San adds.

He says that the European Union recently donated 47 speedboats to the administration and the boats are to be used to crack down on illegal fishing. 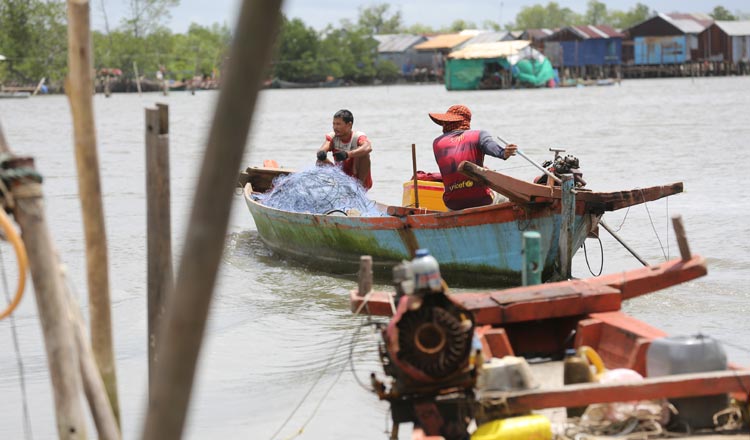 “When we have enough, we will try our best to crack down on fishery crimes and we will increase inspections,” he says, noting that officials taking bribes will be punished. “We will use administrative discipline against them. If the case is serious, they will face legal action and be sent to jail.”

Rear Admiral Mey Dina, a spokesman for Ream Naval Base in Sihanoukville, says navy officials are not involved in receiving bribes from Vietnamese fishermen.

“The navy is not involved in corrupt practices, that’s a smear,” he says. “Navy officers are disciplined. When we patrol our maritime borders, we always receive permission from our top commanders.”

He says anyone allowing foreign fishermen to conduct illegal fishing in the Kingdom should be punished.

“Any navy officer who is not disciplined or do not follow orders will be sacked from their unit,” he says. “Regarding reports of illegal fishing by Vietnamese fishermen, I wish to say that my navy officers do not have the power to let them in.”

He notes that preventing illegal fishing is a job for the Fishery Department and the National Committee for Maritime Security.

“Ream Naval Base will cooperate with these institutions when they seek assistance from us,” he says. “Our main duty is to defend Cambodia’s maritime borders from the enemy.”