The Ministry of Water Resources and Meteorology has warned that some provinces near the borders of Thailand and Laos will experience heavy rainfall that can cause flash floods.

“The situation can cause long, heavy rains which can lead to the possibility of flash floods in all these provinces,” the announcement said. “Please, all the people who are in the provinces pay high attention and be careful during floods.”

Keo Vy, a spokesman for the National Committee for Disaster Management, yesterday said that 16 people have died due to floods this month, including seven of whom were children, and five others were injured.

He added that 89,722 families have been affected and 14,583 families were moved to safer places.

Mr Vy said that 55,947 hectares of rice fields were flooded, of which 1,516 hectares were destroyed.

O’Bei Choan commune in Banteay Meanchey provinces’s O’Chrov district was hit by flood yesterday, affecting more than 100 families, including some whom were evacuated.

Pol Sarin, commune chief, yesterday said that more than 100 families in two villages, O’Bei Choan and Brasat, were affected by flash floods, adding that more than 20 families were moved to a safer place.

“There are no deaths or injuries by the floods,” Mr Sarin said. “The water came into their houses this morning and local authorities went down to help them to a safe place.”

He noted that the floods were due to heavy rain and that the water will recede after the rain stops.

On Friday, Cambodian and Thai authorities found the body of man who went missing on Monday, when flash floods rushing down a mountain side caused a landslide and swamped a village in Battambang province’s Samlot district.

Ser Samet, Samlot district governor, yesterday said that the victim, Phan Ry, 20, was cremated in Thailand, where his body was found. 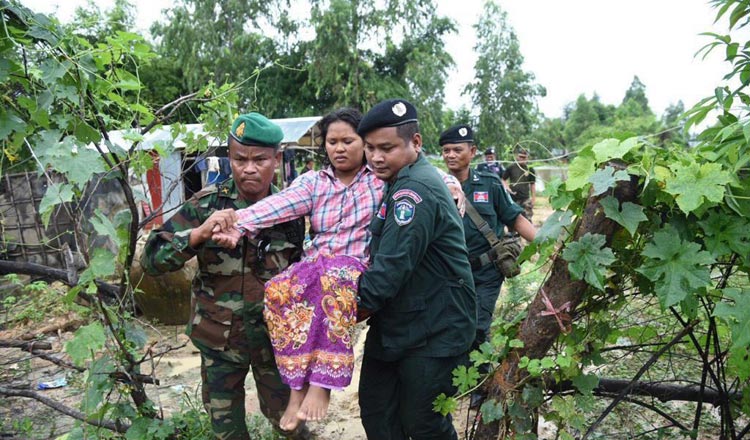 He added that Mr Ry’s family has retrieved his ashes for a funeral ceremony in Ta Tork commune’s O’Treng village, which is near the Cambodian-Thai border.

“When we found him, his body was already swollen and smelled bad, that’s why his family decided to burn his body over there on Saturday,” Mr Samet said.

Mr Ry was one of two victims who went missing last week. On Thursday, authorities found Chhang Kuy, 25, in Thai terriroty with serious injuries and was sent to hospital.