MIND-BLOWING visuals and lighting, a thumping sound system and the best vibes — three elements that made up the craze of last Friday night at One Love Rooftop Bar, when CUBIK returns for another edition of ‘the best damn party in town’.

Presented by Phnom Penh Underground & CODE RED Agency, the party was a massive treat for all music maniacs as it featured a very special guest hailing all the way from the United Kingdom, James What.

Mr What is obviously no stranger to the deck. The multi-talented electronic maestro has played at some legendary venues all over the world including Burning Man, London’s Fabric and The End, Berlin’s Panorama Bar and Watergate.

He is also a part of a highly-acclaimed analogue-loving collective called Berkson & What, which gave birth to its first album “Keep up Appearances” in 2015, and has also given rise to their new label Modelmaker. In 2016, Mr What also launched Araï Agency with a focus on Asia and Australia.

If you weren’t already impressed, the London-based DJ also had some releases on labels like Damian Lazarus’s Crosstown Rebels, Poker Flat and Murmur, with remixes being commissioned by Rue de Plaisance, CityFox and My Favourite Robot, among others.

The essence of Mr What’s showmanship has, in fact, been described as a “gruff techno, slick minimal and classicist house aesthetics”. And true enough, the Cambodian capital saw Mr What living up to the praises on Saturday night. CUBIK promises house, techno, drum & bass and breaks all night long and that was what exactly served on the seventh floor of the building last weekend. The music blared from 10pm all the way up and down to 4am, with the help of much-loved local talents such as DJ Sequence (Phnom Penh Underground), Sushii Firas and B-Fox (Kimchi Collective).

The party was also a good chance for the Rooftop to showcase its brand new look, fresh from refurbishment. Phnom Penh’s number one party venue is now equipped with a canopy to keep out the rain, a state-of-the-art sound system, more washrooms and roof fans to cool off party-goers. 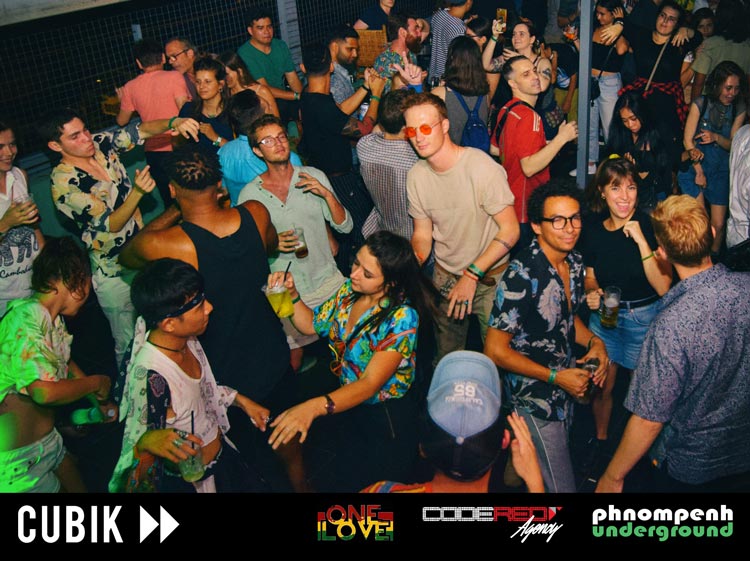 Aside from enjoying the feel-good music and sipping on the special drinks, guests had their faces painted for free by a local favourite Pidor Ham and her team.

Although another chapter of CUBIK party is now closed, Phnom Penh-ers need not worry as the underground DJ collective promises a dozen more parties. Head on over to Phnom Penh Underground’s Facebook page to view more pictures of the fantastic night or to stay updated on the upcoming happenings.

Dressing up the princesses in art