The prime suspect over the killings of three conservationists in Keo Seima Wildlife Sanctuary in Mondulkiri province last year has confessed to the murders while claiming he shot down the victims because they reneged on a deal to accept bribes.

Deputy court prosecutor Long Cheab said that 12 days before the killings, four Vietnamese loggers allegedly bribed Mr Penh and Mr Veha with about $430 in exchange for protection from arrests as they cut down trees in the protected area. 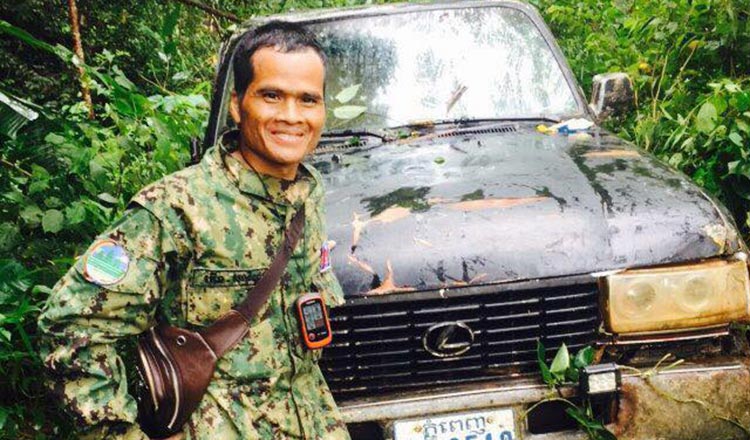 He said at about 11am on January 30, 2018, the three victims went on patrol deep within the forest and encountered the four loggers.

As the victims were seizing the loggers’ equipment, one logger, who goes only by Chin, called Mr Penh to demand the protection they were promised.

After receiving the call, Mr Penh and Mr Veha took their AK-47 assault rifles and arrived on motorbikes to intervene.

“After Mr Penh and Mr Veha arrived at the scene, Mr Penh walked toward Mr Soknai, who was also wielding an AK-47,” Mr Cheab said. “Mr Penh then fired five bullets at Mr Soknai, killing him on the spot.”

“After shooting Mr Soknai, Mr Penh ordered Mr Veha to seize Mr Soknai’s weapon,” he added. “Mr Penh then drove off and killed the other two victims, who were about 60 metres away from where Mr Soknai was shot.”

Mr Penh on Monday said he killed the victims because they lied to him after agreeing to free the loggers and relinquish their equipment in exchange for half of the $430 bribe.

“I shot them because I was angry with them for not keeping their promise. They agreed to receive five million Vietnamese Dongs [about $200] from me in exchange for freeing the Vietnamese loggers and their equipment,” Mr Penh said. “They later reported [the crimes] to the provincial court prosecutor.”

“At first, I shot Mr Soknai five times in the chest. He died at the scene. I shot him first because the tried to shoot me when I first approached him on a road in the forest,” he added. “After shooting Mr Soknai, I drove my motorbike and shot Mr Vathana three times in his stomach. I then shot Mr Kna.”

Mr Penh said after killing the victims, he fled with Mr Veha. He said the motorbikes ran out of fuel, forcing them to abandon their vehicles and hide within the forest before they were arrested days later.

The three other suspects on Monday denied being involved in the shootings. They said the court should drop the charges and release them from pre-trial detention.

Mr Veha told the courtroom that he accompanied Mr Penh, but did not shoot any of the victims.

“I did not fire a single bullet or killed the victims that day,” he said. “I tried to stop Mr Penh from shooting the victims, but he was so angry that I could not stop him.”

“I was shocked to see Mr Soknai terribly die in front of me,” Mr Veha added. “Mr Penh ordered me to seize Mr Soknai’s weapon and keep it for him.”

Mr Veta told the court that after Mr Penh and Mr Veha killed the victims, he alerted police about the shootings.

He said that on that day, he went to pick up the bodies of the victims in his car and took them to a health centre in the district.

“I have acknowledged that on that day I drove my car to pick up the victims’ bodies from the forest,” Mr Veta said. “But, I did not tell Mr Penh and Mr Veha to flee.”

Mr Vannith, who is also Mr Penh’s brother-in-law, told the court that Mr Penh called his wife to send money, a motorbike and clothes.

He said he was told by his wife on February 1 last year to bring the items requested to Mr Penh in Tboung Khmum.

He noted that he was arrested a day later.

“I do not know anything about this case,” Mr Vannith said. “I am innocent. I would like to ask the court to please release me.”

Initially, six people were arrested in connection with the shootings, but two were already punished and released for forestry crimes by Mondulkiri Provincial Court.

Even though it was Mondulkiri Provincial Court that charged the four accused, their cases were transferred to Phnom Penh Municipal Court in order to avoid conflict of interest.

Verdicts are expected in October.