Cambodia had to come from behind to salvage a point against Hong Kong in their FIFA Qatar 2022 & Asian Cup 2023 preliminary group stage opener last week and fans will be hoping the Angkor Warriors can go one better against their Bahraini visitors tonight.

Cambodia dominated against Hong Kong at the Olympic Stadium in Phnom Penh but failed to make their chances count and head coach Felix G. Dalmas said he would remind his players they can’t afford to be as wasteful against a Bahrain side who won the 2019 WAFF Championship. “We’re excited to compete against a really, really good team with a great coach, said coach Dalmas. “We have prepared well and hope to perform to the best of our ability.

“Our philosophy is still the same and like I’ve said before it doesn’t matter who is in front of us. We will play our soccer and try to execute our plan, always. The players not only performed and followed the plan when we win and when we lose. We will keep going that way and hopefully getting better.”

“It’s encouraging to see. And the challenges are getting more difficult but we will rise to the occasion.”

For the Bahrain coach, he expected the Angkor Warriors to be a tough prospect.

“Their team is very well organised and their players have good quality. So we expect a tough game,” said Bahrain coach head coach Helio Sousa. 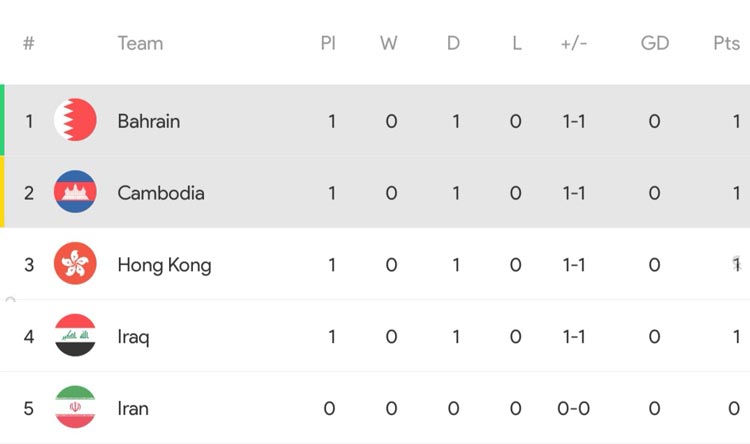 “I think Cambodia will have the advantage because we will be playing on artificial grass. It’s not something we have much experience of so of course there they have the advantage. But they also play very well and they have a good team. They played very well against Hong Kong and two games before that against Pakistan. We must be prepared. We came to get the victory and the three points,” he added.

While Cambodia had to come from behind to salvage a point, in their last match Bahrain saw a win elude them with Iraq scoring the equaliser five minutes from the end after Komail Hasan Al Aswad had given them a ninth minute lead.

Tonight’s match will kick off at the Olympic stadium at 6:30 pm and will also be screened live on BTV.