In Prangil commune, a canal runs dry as farmers push for its connection to a reservoir

Prangil commune, Pursat province – Chheng Phanna takes his krama and wipes the dripping sweat off his face, exhaling a long breath of disappointment as he sits down on the dike dividing his small, arid rice field that is thirsty for water.

The 38-year-old farmer is struggling to spur his rice seedlings due to a drought in Pursat province, which hasn’t yet been hit with rain like other parts of the country.

“We are facing a water shortage and we need to rent pumps to get water from a nearby canal, but so does everybody else,” he says. “This means the canal dries out fast. It’s been a month without rain now. I grow rice just to feed my family and if rain does not come, we will have nothing to eat.”

Mr Phanna, who lives in Phnom Kravanh district’s Prangil commune, is not alone in his struggle. His fellow villagers are also feeling the brunt of the drought and are banding together to help each other.

“The water is the main factor for our rice fields,” he adds. “That, and the insects which we need to battle using pesticides that are expensive. If we manage to grow enough rice, we have to sell some to pay off debts to those who we borrowed from in order to get the pesticides, and fertilisers.”

Mr Phanna has only a quarter of a hectare to grow his rice. The nearby canal in the commune is being used by other farmers as well, on a first come first serve basis, he says.

Those who get to the canal late miss out on what little water is left because the canal is not linked to the Chheu Taok reservoir, which is about eight kilometres away.

“The canal does not connect to other water sources,” he says. “And we don’t have any other sources of water. For those who don’t get any water, they need to wait for rain to come and they will have low harvests.”

The hardship has buttressed cooperation within the community, however. Walking through the commune’s rice fields, dozens of villagers are toiling in each other’s fields, aiding one another so that they do not have to hire outside help.

Nearby Mr Phanna’s field, another farmer is walking toward him, ready to give him a hand with the day’s work.

“In our community, we work like this,” the farmer says. “We help each other when we need help without hiring outside help.”

The farmer says that her rice field is far from the canal and she appreciates the help provided by her neighbours.

“We help others and they help us,” she says. “We also band together to request the authority to connect the canal to the reservoir, but it has been three years already and it still has not happened.”

“However, the commune authority just called us for the meeting a few days ago to discuss the canal,” she adds. “If the canal is extended to Chheu Taok reservoir, the water will be sufficient. This problem happens every year.”

The farmer adds that every year, when villagers need rain, it does not come, and when they need no rain, too much comes.

“It never goes according to plan,” she says. “Right now, all we can do is wait for the rain.”

The farmer adds that she too, like Mr Phanna, has to sell some of her rice to traders in order to pay off debt incurred form buying pesticides and fertilisers. And with the price of rice dipping, villagers are struggling to survive.

“For the fertilisers, we get them from traders and then when we harvest in October and November, they come to collect money from us, with interest,” she says. “What we want is the canal connected to the reservoir, as that would help us; it would allow us to harvest twice a year instead of once a year.”

Maol Yean, 50, another farmer in the commune, says that she recently went to the canal to get water for his half-hectare rice field only to find it empty.

“The canal is near my rice field, but it is empty,” she says. “If it is connected to the Chea Taok reservoir, we would have enough water. I can get just one tonne of rice from the half hectare and it is not enough for my family of seven.”

Ms Yean says that he too often owes money to traders that provide fertilisers and pesticides, noting that she sometimes has to sell his chickens in order to pay them off.

Sam Chanthan, deputy chief of administration with Phnom Kravanh District Hall, says he knows the hardships of the farmers well, but a project to connect the canal to the reservoir will take time. 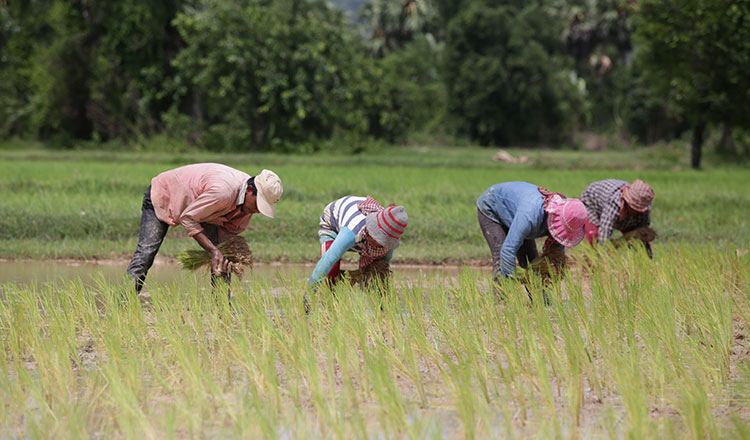 Mr Chanthan says the canal in Prangil commune is nearly ten kilometres away from the reservoir and would consume too much of the budgets to connect.

“It can be done only with intervention from the national government and donations from generous people,” he says.

“The government has a plan to dig canals connecting to Chheu Taok,” he adds. “It will give more water to the people in the commune. However, it will be done in phases.”

Mr Chanthan could not provide a timeline for the phases.

Mr Chanthan notes that the ongoing challenge of drought faced by the villages in the commune has led to some migrating outside the country to find work.

“There are about 2,000 people migrating in the whole district,” he says. “This number can be reduced if we have sources of water.”

Lay Viseth, director of the provincial agricultural department, says that the lack of rain is just part of being a farmer, while also dismissing farmers’ concerns over the price of fertilisers and pesticides.

“There is some rain actually, but it is still not enough and this is normal for agriculture,” he says. “The lack of water is normal. However, according to the forecast this year, the water will not be a problem, it will just take time to come.”

Mr Viseth adds that farmers need to learn how to properly use fertilisers as instructed by agricultural officers who have visited the commune to educate them.

“I don’t think the price of the fertilisers is expensive,” he says. “In order to help them improve their technical farming skills, we have trained them.”

Hai Thoura, deputy director of the provincial agriculture department, acknowledges the drought, but says it is not severe enough to impact people’s livelihoods.

“The rice fields will be fine,” he says. “Some places have water sources and for those who do not, they will get rain soon.”

Minors prone to sexual exploitation as tech use rises