Both leaders also witnessed the signing of agreements on tourism cooperation and double taxation.

On sanctions from superpowers against small countries, Mr Mahathir said they were grossly unfair and hurt not only the country that is hit, but also other countries which do business with it.

“We have no quarrel with this country [the one hit by sanctions] but we are prevented from doing any business with it because of the sanctions. This is grossly unfair,” he said. “As a small country, we cannot apply sanctions on anybody, but it is the big powers who apply sanctions and therefore deprive small countries of their freedom.”

“Despite the fact that they [those imposing sanctions] keep on talking about human rights and freedom, they take away our freedom to trade with our own trading partners,” he added.

The Kingdom has been hit by visa restrictions on high-ranking government officials by the United States, which is also threatening to revoke access to the Generalised System of Preferences over perceived human rights setbacks.

Meanwhile, the European Union is continuing a review of the Kingdom’s access to the Everything-but-arms trade scheme over the same issues.

Mr Hun Sen said both leaders also expressed support for Timor Leste to be admitted as the 11th member of the Association of Southeast Asian Nations and also discussed visa exemptions to allow tourists to visit both countries on a single visa.

After their meeting, Mr Hun Sen and Mr Mahathir witnessed the signing of two agreements.

The MoU on Tourism Cooperation and the Agreement on the Avoidance of Double Taxation and the Prevention of Fiscal Evasion with Respect to Taxes on Income were signed by Finance Minister Aun Pornmoniroth, Tourism Minister Thong Khon and Malaysian Foreign Affairs Minister Saifuddin Abdullah.

Speaking to reporters during a press briefing after the meeting, Mr Hun Sen said he had a “pleasant and close” conversation with Mr Mahathir.

“I and Dr Mahathir Mohamad value the relations of friendship and bilateral cooperation between Cambodia and Malaysia in all sectors, such as security, economic, trade, investment, tourism, education, jobs and culture,” Mr Hun Sen said. “We are committed to expand and strengthen bilateral and multilateral cooperation in order to benefit the peoples of both nations and also contribute to peace, stability and prosperity in the region and world.”

He said both nations are also pushing for MoUs on defence and anti-human trafficking. 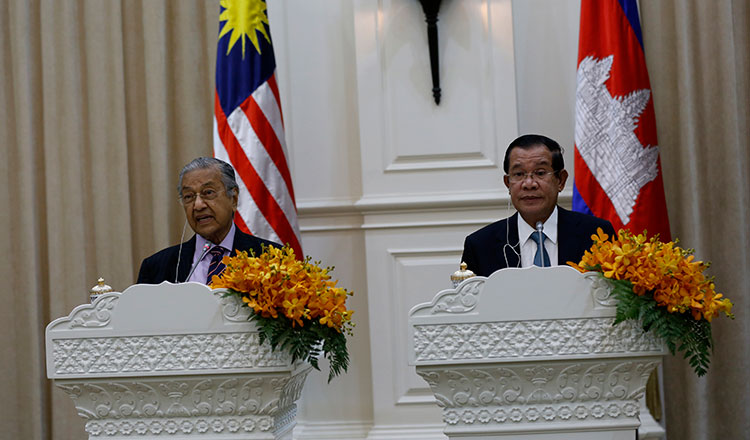 He said he and Mr Mahathir encourage relevant agencies of both countries to continue strengthening the frameworks agreed upon regarding employment, and further strengthen close cooperation and coordination to promote the rights and address the welfare of Cambodian workers in Malaysia.

In response, Mr Mahathir said the Malaysian government pays attention to the welfare of foreign migrant workers, including Cambodian maids.

“We have a number of Cambodians working in Malaysia and we need to look after them, their healthcare, and well-being so that they will have full benefits from the work they do in Malaysia,” he said.