Catman returns to his favourite haunt

IT’S not every day you get to see someone play solo ska music wearing a cat suit, but this weekend you get your chance: Japanese-born New Zealand resident Moisty Atsushi is coming to town

When did you first come to Phnom Penh, and what are your general impressions of the city?

Moisty Atsushi: My first gig in Phnom Penh was in 2015, and Shu and Big Mike kindly invited me to play at Sharky Bar. I spent a few days in the city, played some more music, and I got to know the Phnom Penh music community.

I enjoyed it, so I tried to visit as often as I could, however I have not been back for more than a year – the last time I played in Phnom Penh was around Christmas in 2017 at Taco Kokopelli and Good Times Bar. I have to admit that I really like Phnom Penh. If I could I would live there. The city has a great energy, yet also a great friendliness. I feel that I can have a chat with anyone. I believe that it reflects on the expat community. Every time I played in Phnom Penh I feel a great sense of community and inclusiveness. I have never felt anything like this in Bangkok or Saigon. Phnom Penh has a special power!

When and how did your love affair with ska begin? 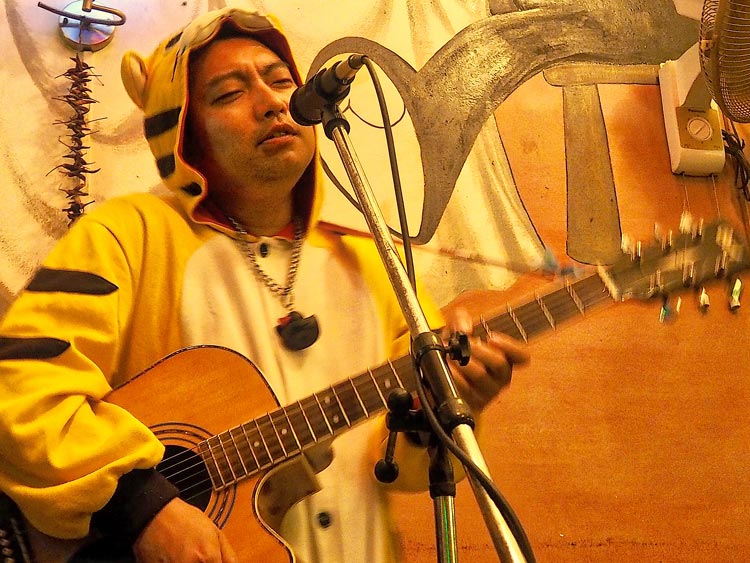 Moisty Atsushi: In my high school days, I explored many types of music, including rock, pop, punk, metal, swing jazz, and oldies (40s to 60s). I particularly love punk, like The Clash and The Sex Pistols, swing jazz like Glenn Miller and Benny Goodman, and old surf music like The Ventures and The Shadows).

Later, Red Hot Chili Peppers and Fishbone – I loved how Fishbone mix many types of music in their sound. Around the same time, I discovered The Mighty Mighty Bosstones and The Skatalites, and I fell in love. It was like finding your true love. But I didn’t know anything about them. The Bosstones have crossover music, in a similar way to Fishbone, and a punky edge like The Clash had. And I heard the big band jazz sound from the Skatalites. Since then, I wanted to know about them more. Eventually this became my obsession with ska music.

Your music has an uplifting, hopeful and connecting feeling – do you think that’s an important part of making music?

Moisty Atsushi: I appreciate that you can feel that way. I do not intend to write happy music or anything like that, but the stage performance is very important to me, and I genuinely like to connect with my audience. So I try to do my best for people to enjoy my show. Who wants to see a sad little tiger on the stage?

In all your musical travels, what have been the most noteworthy or enjoyable cities to perform in?

Moisty Atsushi: Well, of course, Phnom Penh is one of my favourite places to play for sure. I always tell my ska muso friends to go to play in Phnom Penh.

Other than that, I enjoyed playing in Valencia, Spain; Buenos Aires, Argentina; Moscow, Russia, and anywhere in Indonesia. Those places have wicked ska communities. They may not be big, but I liked them. I feel like I’m in my home. Anyone who likes ska, I highly recommend to visit those places.

What next for the Catman?

Moisty Atsushi: I would like to do more gigs this year, and I want to record next SkaCoustic album. My main big project is a ska instrumental album with the band, but I don’t know when I will finish this. Hopefully it will be my masterpiece — wish me luck!

SKA is a music genre that originated in Jamaica in the late 1950s and was the precursor to rocksteady and reggae. It combined elements of Caribbean mento and calypso with American jazz and rhythm and blues. Ska is characterized by a walking bass line accented with rhythms on the offbeat. It was developed in Jamaica in the 1960s when Prince Buster, Clement “Coxsone” Dodd, and Duke Reid formed sound systems to play American rhythm and blues and then began recording their own songs. In the early 1960s, ska was the dominant music genre of Jamaica and was popular with British mods. Later it became popular with many skinheads. Typical instruments: Electric guitar, bass guitar, trumpet, trombone, saxophone, piano, drum kit, electric organ. Source: Wikipedia