Home - ‘Widow Island’ Where the past is stranded

‘Widow Island’ Where the past is stranded

On the Mekong and Tonle Sap, the two ‘great rivers’ in Cambodia that can reverse their flow as the seasons change, lies dozens of picturesque islands each of which is worth a visit in its own right. Some are located near the capital of Phnom Penh and have turned into attractive destinations for stressed out city residents in this era of eco-consciousness. Among these is Koh Ksach Tonlea, an agricultural islet on Bassac River, a distributary of the Tonlé Sap and Mekong River. While its beauty and unspoilt natural features are luring the discerning traveller, the tragic story behind it should make Koh Ksach Tonlea even more alluring. Taing Rinith brings readers to the islet also known as ‘Widow Island’.

BEFORE heading out to Koh Ksach Tonlea, located 30km from the heart of Phnom Penh, there are certain preparations to be made. Firstly, if you are visiting it on a weekday, bring enough food for a whole day because there is no restaurant nor eatery in sight on the small island. And local folk usually sell only food during the weekends. On the practical side, a thick raincoat will serve to protect you from both rain and scorching sun. A creative traveller can also use the raincoat as a picnic blanket. Now, you are ready to go.

Supposing that you depart from the Independence Monument, head south on National Highway 2. About one hour later, after passing Ta Khmao town and entering Sa’ang District of Kandal province, turn to National Road Number 21. After another 20 minutes, you will reach a pier, where you can board a ferry to Koh Ksach Tonlea.

This is the take-off point.

Boarding the ferry very early in the morning is highly recommended since you will not miss the spectacular sunrise on the river while the air is cooler and the ferry is less crowded. For a fee of 1,000 riel ($0.25), you get a pleasant ride across the river, but remember to look after your own skin since the poor boatman does not have a lifejacket to hang on for dear life.

When approaching the wooden pier on the island, you will be able to tell the differences from the mainland, when the cool, fresh breeze hits you in the face. Almost everywhere is a blanket of tropical trees and flowers, emanating a fragrance that wipes out the car fumes of the dusty city. Look over your shoulder, and you will witness the life of hardy fishermen working on their boats, which with the river, framed by a picture of lazy tranquility.

Next to the island’s pier is a small but beautiful beach, the best known attraction of the islet. People build small huts on the beach to be rented out over the weekends or on national holidays. The beach offers the same elements as coastal beaches, of course except for the salty water.

Many visitors spend their entire day at the beach and see their stress sailing off into the river, but that cannot be enough for an enthusiastic traveller. It is time to move on.

The island infrastructure is naturally mostly underdeveloped, including the road. However, this very fact makes it an ideal spot for hiking and cycling. On a dirt road, lined with different species of trees, you can see the agrarian life of the islanders, who live off the vegetable and fruits they grow and fish from the river. There is not a market either, and now and then, you may see a grocery vendor fleeting from house to house.

Their life has seen almost no change in the last few decades. Nothing has changed. You will also see the island children, unlike the city youngsters who are going crazy with heads bowed to their smartphone, playing old-fashion games like tag and hide-and-seek.

About 1km north of the pier is the home of Ech Mok, the only traditional boatmaker in the area. The friendly craftsman invites curious travellers to his workshop. And have some tea.

“The main means of transportation are bicycles and boats while there are a few motorbikes and barely any car,” Mok says. “I’ve been making boats for the people here for almost 30 years.”

According the 51 year-old boatmaker, Koh Ksach Tonlea has another name: Koh Memay (translates to Widow Island). The name has a tragic story behind it.

“During Khmer Rouge regime, the island was the place where the Khmer Rouge kept the wives of the murdered male victims,” he revealed. “Not many people know about this. One of those women was my late mother.”

Many of the widows are still alive and willing to tell you their stories. The stories are always sad, full of abuse and great losses. No one knows how many widows were kept here. Some say a few hundred while others say it runs into the thousands. The rest is up to your imahination.

The area on the other end of Koh Ksach Tonlea is perfect for kite-flying or old-fashioned fishing, if that happens to be your hobby, and the best spot on the islet to view the sunset.

As the orange sun sinks into the river and fishermen beat a retreat, it is the time to reflect on your journey to virtually nowhere, and ponder the dark secret sheltered by this idyllic and innocuous islet so near Phnom Penh city. 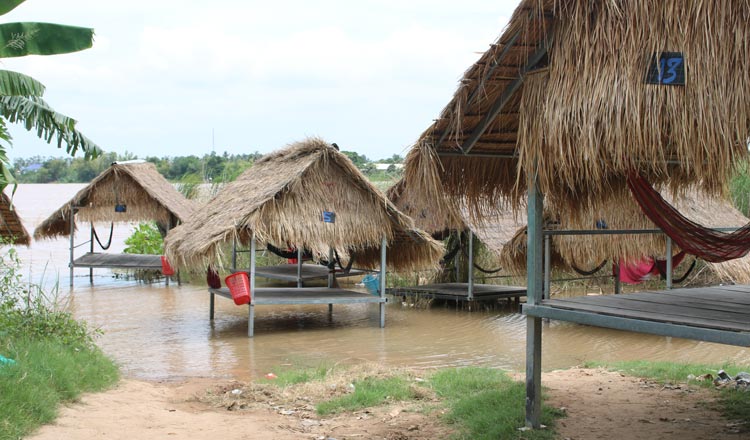 Stupefying tale behind the ‘Beast People’