DJ Lion on trial over drugs

Phnom Penh Municipal Court yesterday tried DJ Lion along with three others for allegedly trafficking drugs in the capital in December.

Judge Chheanavy said they were arrested separately by the Interior Ministry’s Anti-Drug Police Department between December 18 and 19.

She added that they were arrested after police intercepted a drug transaction and inspected two rooms inside Rock Entertainment Centre, which was located in Tonle Bassac commune in Chamkar Mon district.

“Mr Borith was arrested red-handed at about 2am on December 18 while selling a package of drugs to an undercover police officer at Rock Entertainment Centre’s room 108,” Judge Chheanavy said. “Police seized a large package of methamphetamine weighing 598.78 grams from him.”

“Mr Borith’s confession led to the arrest of Ms Sreyna in Tonle Bassac commune on the same night,” she added.

Judge Chheanavy said police also inspected room 207 and seized another 1,552 ecstasy pills, two scales, one pistol, as well as other drug using materials from them. According to the Rock’s records, the room was rented by Mr Samphors.

She added that Mr Borith and Ms Sreyna also provided information that led to the arrests of Mr Samphors and Mr Sakhorn in a guesthouse in Prampi Makara district’s Veal Vong commune on December 19.

“Police arrested Mr Samphors and Mr Sakhorn while they were using drugs inside the guesthouse room,” Judge Chheanavy said. “Police seized two small packages of crystal meth from them.”

During yesterday’s hearing, Mr Borith admitted committing the offence and said that the drugs seized from him belonged to Ms Sreyna.

He told the court that he started working as a presenter with CTN Television and also as a DJ at Rock Entertainment Centre in 2014.

Mr Borith said he met Ms Sreyna in 2016 after he started using drugs.

“At first I used ecstasy after I finished work at the night club. I used it with my friends,” he said. “I soon became addicted.”

Mr Borith said that on the day of his arrest, he received a package of drugs from a motorbike taxi driver. 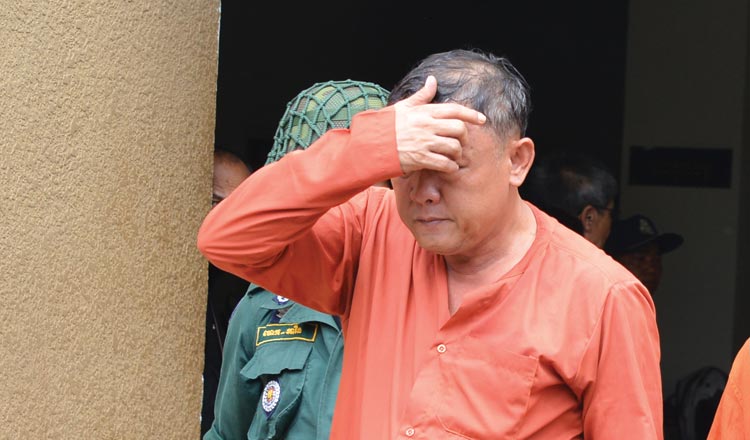 “I was arrested by police after I gave the drugs to the unidentified man, who came to obtain the package from me in my room,” he said. “After I was arrested, police told me that the man was an undercover police officer. I was very surprised.”

Mr Borith told the court that he was only helping Ms Sreyna because she used to give him drugs for free. He added that he did not receive any payment from her.

“I am not a drug trafficker, but I am a drug user,” he said. “I ask that the judges’ council give me a light sentence.”

Meanwhile, Mr Samphors denied the allegations, saying that he did not know Mr Borith or Ms Sreyna.

He also denied that he rented room 207 at the Rock or that he was the owner of the drugs and gun police seized from the room.

“I confess that I am a drug user and that I was there that night, since I go to Rock Entertainment Centre almost every night,” he said. “But I am not a drug trafficker and I also do not own the drugs or gun seized from room 207.”

“I am unemployed and I do not have the money to buy such large amounts of drugs as accused,” he said.

Mr Samphors asked the court for a minimum sentence.

The trial will continue on September 3.