He noted that 456 people were evacuated, mostly from Prey Nop district. 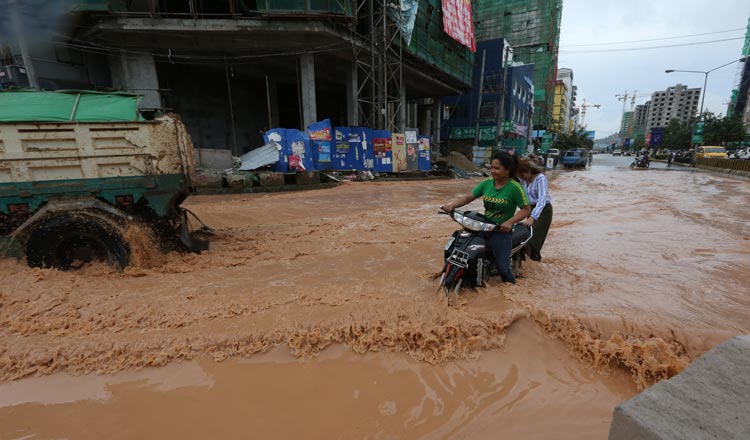 “The flooding is due to prolonged heavy rain and we acknowledge that canals have been clogged by garbage, and that some buildings under construction carry out work with total disregard to regulations,” he said.

Mr Phearom said the Water Resources, Public Works and Transport ministries, as well as generous people, have donated 14 excavators and some dump trucks for the provincial administration to clear clogged waterways.

“We hope serious flooding can be avoided in the future,” he said, noting that action will be taken against anyone who clogs canals.

“The floods have caused heavy losses, including people’s lives, and affected properties and business operations,” Mr Phearom added. “We appeal to the public to cooperate with the authorities’ efforts to prevent such natural disasters.”

Some people in Sihanoukville have blamed the flooding on the use of one of four drainage canals in the city to prevent polluted water from flowing into the sea.

In March, authorities closed the canal for drainage use in order to transfer wastewater to four water treatment plants before the water is released into the sea.

He said the city has received 2,764 millimetres of rainfall which was too much for the drainage system to handle.

“During a week of rainfall in Sihanoukville, 165 millimetres of water fell daily.… It is very difficult when there is a heavy rain like this, so we cannot avoid floods,” Mr Kean Hor said. “It is nothing strange; it is purely a natural disaster.”

Van Kan, a 74-year-old resident in Sihanoukville, said he has rarely seen heavy flooding like the one the city has been experiencing over the past few days.

“The flood has severely affected my house and as you can see it is still waterlogged,” he said. “My TVs, freezer and fans have been damaged.”

Mr Kan said the authority must urgently fix the drainage and canal systems in order to avoid further flooding in the city if there is more rain.

Earlier this week, provincial Governor Kuoch Chamroeun announced a plan to renovate canals in Sihanoukville in order to mitigate the impact of flooding.