To strengthen security in digital transactions, the Association of Banks in Cambodia (ABC) and Visa yesterday signed an agreement enabling the use of the EMV payment method in the Kingdom.

EMV – which stands for Europay, Mastercard and Visa – is a payment method based upon a technical standard for smart payment cards and for payment terminals and automated teller machines that can accept them.

It is the global standard for chip-based credit and debit transactions, helping to maximise security and preventing the card from being counterfeited and being used by someone else if lost or stolen.

EMV cards are smart cards that store their data on integrated circuits in addition to magnetic stripes. These include cards that must be physically inserted into a reader, as well as contactless cards that can be read over a short distance using near-field communication technology.

At Wednesday’s ceremony, Visa said the agreement paves the way for EMV to be widely used in the Kingdom, including chip for enabled-cards, ATMs, and point-of-sale terminals, ensuring they meet international chip standards.

Speaking at the ceremony, Chris Clark, Visa president for Asia Pacific, said the adoption of Visa’s EMV standards will help the banking sector combat counterfeiting and fraud and represents an important step forward for the industry. 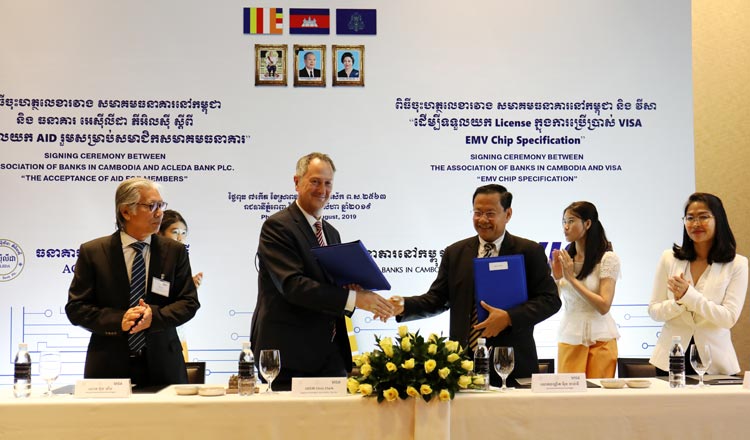 “This agreement marks yet another milestone in our journey. The adoption of Visa’s EMV chip standards by the Association of Banks in Cambodia supports the nation’s interbank network as it transitions from magnetic stripe payment cards to secure EMV chip technology,” Mr Clark said.

Visa, the world’s leader in digital payments, has focused on working with governments, financial institutions and merchants around the world to expand access to electronic payments, to increase efficiencies and drive economic growth, said Mr Clark.

“With less than three percent of all personal consumption expenditure being transacted digitally here in Cambodia, we see a huge opportunity for the growth of electronic payments,” he added

He noted that Visa has become a trusted method to pay and be paid by more than 3 billion cardholders and 54 million merchants across the globe. “This trust comes with great responsibility,” he emphasised.

“By adopting Visa’s EMV chip standards, we will be able to strengthen domestic transactions and our network of ATMs, providing greater security to our financial services across the country,” he said.

In a report launched in June, Visa found that the rate at which Cambodian consumers are embracing digital payments is remarkable.

According to the study, a third of Cambodians expect that digital payments will continue to gain popularity compared to cash, while 54 percent say the economy can go fully cashless within the next seven years.

Kimty Kormoly, deputy director-general of the National Bank of Cambodia, said the collaboration between ABC and Visa enhances payment interoperability and security.

“This partnership will play a significant role in promoting efficiency and safety in Cambodia’s payment system,” he said.