BANGKOK (Bangkok Post) – Long-term foreign residents are crying foul at the strict implementation of the TM30 reporting rules, saying that it will only penalise law-abiding foreigners and have little effect on ill-intentioned criminals and other wrongdoers who skirt the law and evade the requirements.

The reinforcement of regulations regarding the so-called TM30 form is outlined in the 1979 Immigration Act.

The TM30 is a form that landlords which provide accommodation to foreigners must submit to the authorities within 24 hours of the arrival of their tenants.

By law, landlords must submit the form to authorities every time their tenants return to the country.

Long-term foreign residents are also required to report their whereabouts if they spend more than 24 hours at places other than their registered addresses.

Landlords and tenants who fail to comply face fines of between 800 to 2,000 baht, although the sum seems to differ across different immigration offices.

A foreign NGO worker who asked not to be named said that he doesn’t think that form is a problem, as it is his landlord’s responsibility to submit the form to authorities.

The NGO worker, who has been living in Thailand for eight years, said he has a one-year visa and reports to officers at Chaeng Watthana immigration office every 90 days.

He said that while he finds it weird that has to leave the country as he waits for his visa extension to be approved, he has done so nonetheless. 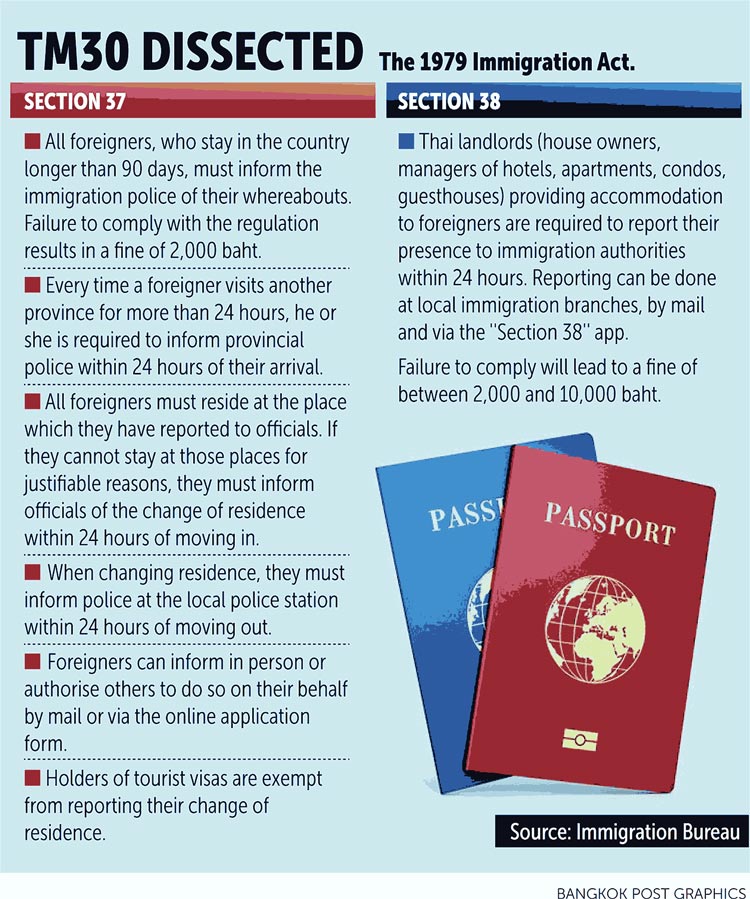 However, he was asked about the TM30 form for the first time when he last came in for his usual 90-day report.

“An officer asked me if my landlord has submitted the TM30 form,” he said.

“When I told him I had no clue, the officer said that I could submit the report on my landlord’s behalf, which I refused to do.”

“I am not currently sure how exactly this TM30 works and what the consequences are if it’s not followed,” he said, before adding that he doubted the effectiveness of the measure.

“Those who have bad intentions and want to avoid the rules will skirt the rules anyway,” he said.

Yomi Sonubi, the Projects and Operations Director of Needeed Foundation who has been living in Thailand for six years, said the TM30 would not be a problem if tenants maintain good relations and communication with their landlords.

“However, it will be a problem for foreigners who have to travel abroad often,” he said, before adding that the additional burden has caused some staff to think about relocating.

Meanwhile, IB chief Pol Lt Gen Sompong Chingduang admitted there are problems that need to be addressed to improve understanding of the regulation among landlords.

However, he stressed that the TM30 process will continue to be enforced, despite the problems it is encountering.