The Phnom Prich Wildlife Sanctuary, despite its conservation status, was once a busy scene for loggers. But since the arrest of well-known timber tycoon Soeng Sam Ol over illegal logging, activists in the sanctuary’s surrounding areas have noted a decrease in activity.

Mr Tola says that since the arrest of tycoon Soeng Sam Ol and crackdown on his alleged operations, illegal loggers are no longer transporting forestry goods in the area.

“It has stopped – no more activities – and this is what we want to see in our province,” he says.

Behind the office of the Koh Nhek military police are a number of trucks the authorities say were used to transport illegal timber. They are now burned to a crisp. Mr Tola says he is happy and welcomed the recent crackdown.

“Please do this forever, don’t just keep the flame alive for a short time then disappear,” he says.

That particular crackdown yielded the confiscation of a huge amount of timber. However, he says that despite the shock-and-awe aspect of the operation, logging activities continued unabated.

He says that major crackdowns happened again between 2016 and 2017, about 18 or 19 years later, following threats from high-ranking government officials such as Prime Minister Hun Sen, who ordered the use of rocket launchers against loggers.

“We hope this time that the mission’s outcome will last forever,” Mr Tola says.

As he picks up pieces of scattered wood, Mr Tola says the government had issued directives to discourage illegal logging, but notes that he wants to see more tycoons suspected of illegal logging activities in handcuffs.

“The arrest of one tycoon is not enough, and it’s not justice for the forest because we lost a lot of trees,” Mr Tola says.

According to the National Committee for Forest Crime Prevention, tycoon Soeng Sam Ol was charged with illegal logging, and several other Mondulkiri officials were summoned to be questioned by the provincial court over Mr Sam Ol’s alleged illegal logging activities.

National Military Police spokesman Brigadier General Eng Hy said three forestry administration officials and three Chinese nationals were arrested on July 26 and that they were sent to court on July 29.

“Up until today, we have not done a report yet, so I don’t know how many people were charged while they were in court,” Brig Gen Hy says.

According to a report by the Forestry Administration, between 2014 and 2018, the administration cooperated with national and local authorities to crack down on about 8,600 cases of forestry crimes.

Mak Mony, director of the Agriculture Ministry’s planning and statistics department, said the ministry is currently managing 229 projects handled by ELC companies in 1,168,430 hectares of land.

“The government’s strategy is to continue to reform land [laws] in order to strengthen management, allocation and use of land. It is also to ensure the security of land ownership,” he said. “[We want to] eradicate anarchy in illegal land occupation and prevent land encroachment by those who weren’t given an ELC.”

In Stung Treng province, activist Kheng Kho is on his motorbike as he works to monitor the aftermath of the recent crackdown in Mondulkiri province. Mr Kho says he has not seen any timber being transported on motorbikes and trucks from Mondulkiri any more.

He says that before the crackdown, hundreds of motorbikes and dozens of trucks transported timber to Vietnam.

“If they didn’t have an inefficient system and if they had started the crackdown in 2000, I think we would not have lost our trees today,” Mr Kho says.

Along the way, he stops his motorbike near the Lim Royal Joint Stock Company office because it’s about to rain. He says that in Mondulkiri, people are hired by a group of tycoons who aim to cut down trees and transport timber harvested in land given as Economic Land Concessions.

“We as members of local communities tried our best to protect the forest,” Mr Kho says. “But we could not win against tycoons because they had money.”

As rain begins to pour, Mr Kho says the National Committee for Forest Crime Prevention failed to stop deforestation because it could not prove Lim Royal Joint Stock Company was involved in illegal deforestation.

“Who doesn’t know tycoon Lim? He is famous throughout the world for logging in the Phnom P r i ch Wildlife Sanctuary,” he claimed. “For me, I don’t want to see the activity return – we want to see recent improvements continue so we can protect what is left of our forest.”

An indigenous Bunong from Koh Nhek district says illegal logging is an open secret, not like drug trafficking. He says it’s apparent because trucks would cross the border full of timber.

“From what I’ve noticed, the logging business started with the company that received an Economic Land Concession,” he claims. “Logging didn’t just happen a year or two ago – it’s been about 20 years already.” He says the authorities have always known about illegal logging activities, but chose not to inform their superiors for almost 20 years, adding that the practice can no longer be hidden due to social media.

“When we get news about illegal logging, we record it on video and post it on Facebook so the authorities cannot deny us,” he says.

He says that indigenous people depend on raising animals and planting crops and that they need trees. However, their work became conflicted when ELC companies began taking their farmland.

“Most of the indigenous people, including me, were cheated by loggers,” he says. “They gave us a little bit of money to cut trees for them.”

“So we face losing our livelihood and our culture,” he adds.
The source adds that if the forest can be protected, local communities will be able to farm and have trees to build houses.

“They should have cracked down on logging a long time ago,” he says. “Our forest was destroyed by the company that received the ELC. They received a license from the government, then they started logging.”

Lim Royal Joint Stock Company could not be reached for comment.

According to a report by the Environmental Investigation Agency, more than one million cubic metres of illegal timber flowed unhindered from protected areas in the Kingdom’s northeastern provinces to Vietnam.

It said that EIA investigators visited the areas from 2017 to 2018 to look into whether illegal trade in Cambodian timber had ceased. However, it noted that investigators identified three main areas plagued by ongoing illegal logging operations.

In its report, the EIA said these areas included the Virachey National Park in Ratanakiri province, forests surrounding the Lower Sesan II dam in Stung Treng, and Phnom Prich Wildlife Sanctuary in Mondulkiri.

Ouch Leng, chairman of the Cambodia Human Rights Task Force, says deforestation began in 2005 and the blame for deforestation of nearby protected areas should go to ELC companies.

Mr Leng says according to a report, the government has issued concessions of more than 2.1 million hectares of land to investors.

“There are also other timber tycoons in Cambodia going into protected areas such as the Prey Snuol Wildlife Habitat in Kratie province and the Phnom Prich Wildlife Sanctuary. They do this without fear,” he alleged.

Mr Leng says the government must be committed to crack down on illegal logging and sanction all companies for the crime, not just a handful.

“If the crackdown involves one tycoon, it just means that it’s a game to extort money from him,” he alleged. “It would be just to crack down on all companies and cease issuing licenses.”

Mr Leng says the European Union must not sign any more timber agreements with Vietnam since Vietnamese timber traffickers get their timber from Cambodia illegally.

“The great destruction of Cambodia’s forests is also caused by the EU,” he says. “It’s clear that Vietnam has been smuggling timber from Cambodia for decades.”

“Officials are not tough on loggers, they cooperate with loggers to issue permission to transport,” he says. “The environmental office is close to the ELC company’s building [Lim Royal Joint Stock]. Where there are officials, trees are still lost. I want to see all those officials be questioned in court.”

“Lim Royal Joint Stock Company transported timber mostly harvested in protected areas, such as the Phnom Prich Wildlife Sanctuary, and brought them to Vietnam,” he alleged.

As he walks on a muddy road to take a picture of a piece of wood in a protected area, Mr Sros says companies are able to hire people to cut down trees because they work with environment officials to have permission granted to transport the products to Vietnam.

Mr Sros says that in the past, the authorities blocked nine trucks carrying timber as they attempted to cross to Vietnam. He says the trucks belonged to Lim Royal Joint Stock Company.

“Companies that received an ELC from the government have done nothing to develop, they only did logging,” Mr Sros says, adding that it’s a trend that can be seen nationwide.

He notes that 223 companies have been given ELCs in Cambodia, including 126 local companies, 43 Vietnamese companies and 27 Chinese companies.

“Most of the companies were established between 1995 and 2016, so you can imagine how many trees were lost? Some people became tycoons by logging in protected areas,” Mr Sros says.

He says the government should strengthen its institutions, especially in regards to the issuance of legal authorisation. 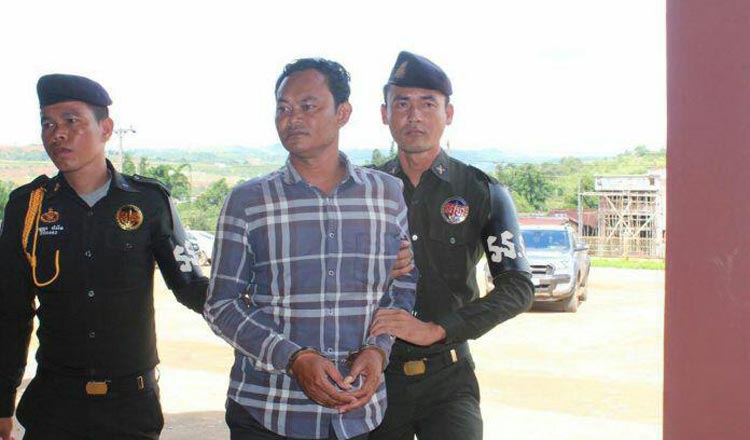 “Please understand that our ancestors did not take logging as a job – so how were they able to survive?” Gen Sokha says. “There are many other occupations that can help support our lives. We should change our habit of destroying ourselves.”

He says no one is above the law.

“If anyone is found to have committed a crime, they will be suppressed,” Gen Sokha says. “Law enforcement officials have to strengthen discipline and enforce the law.”

Environment Ministry spokesman Neth Pheaktra says government officials have been working to crack down on illegal logging for a long time.

“The crackdowns haven’t just started,” Mr Pheaktra says. “Measures against illegal logging have been taken all the time.”

“Those who committed these crimes were identified and are now in jail for deforestation,” Mr Pheaktra says. “We won’t tolerate anyone if we have enough evidence. The Environment Ministry has control of 7.5 million hectares of protected areas.”

“The Royal Government of Cambodia continues to crack down on illegal logging, improve law enforcement and disseminate education in order to increase public awareness and develop for the lives of members of local communities,” he says.

He notes that according to a report by the Cambodia Forestry Resource Assessment in 2016, deforestation between 2014 and 2016 decreased by 0.82 percent.

Marcus Hardtke, a conservationist who has worked in Cambodia for over a decade, claims that crackdowns in the past were used as an opportunity for negotiations between officials and perpetrators.

“No serious steps were taken to protect the forest by the task force at that time,” Mr Hardtke says. “Now the same gangsters are caught again, after many months of organised illegal logging and smuggling.”

Mr Hardtke says officials provide a massive loophole for illegal logging and timber laundering, noting that the crackdowns are ineffective.

“Tycoon Ol was caught before but obviously managed to negotiate his way out of trouble and continued logging until he was caught recently, as did a handful of other gangsters in the area,” he adds. “What will happen this time?”