Home - The Rail-way to see the country

The Rail-way to see the country

It is the weekend and you want to go out for a ride to de-stress. Too bad! At the end of the day, before you can even reach the outer limits you are in a fit because you have lost half of your day stuck in traffic jams, moving at snail’s pace and listening to drivers not quite exchanging pleasantries. Want a more leisurely trip? Taing Rinith brings you on a train ride to the country’s coastal region. It will be a journey you will not forget, he writes.

“The firewagon was going as fast as a storm, passing through the jungle and crossing the bridge that spanned across cannels while letting out a thunderous roar that shook the earth. When one looked out of one of the windows in one of the carts, he could see paddy fields, with blackish-grey paddy dikes forming a giant chessboard and seeming to be moving backwards.”

This is the first paragraph in Pkar Srapoun (Dying Flower), a famous novel set in the French Colonial period. Its writer Nou Hach, a leading master in the country’s Romance genre, in all of his works included a journey on a train, which in Cambodian context is known as ‘firewagon’. Many legendary writers also did this, thanks to the pleasant experience passengers can acquire on a train ride. Seventy years after Pkar Srapoun was published, such a journey can still be enjoyed, inexpensively.

Although born here and living in Cambodia for 25 years, I had never been on a train here. It is not strange today, where our modern life is characterised by rushes and datelines. Yet, with my first train ride to Sihanoukville, I seemed to have left all my stress back on the departure platform.

Although it is barely six on a Sunday morning at Phnom Penh’s Cambodia Royal Railway station, the platform was already filled with passengers, to board the train which will depart for Sihanoukville in an hour. Also crossing Takeo and Kampot, the Phnom Penh-Sihanoukville railway line was just reopened in 2016, after 14 years being out of action.

Most of the passengers are looking forward to an enjoyable expedition across the country’s southwestern region rather than a fast ride.

“Going by train takes longer, but if I want to reach the destination fast, I take a bus or a taxi,” says Long Chheng, a 67-year-old retired schoolteacher. “Yet, there is no better way to see Cambodia than a train ride.” 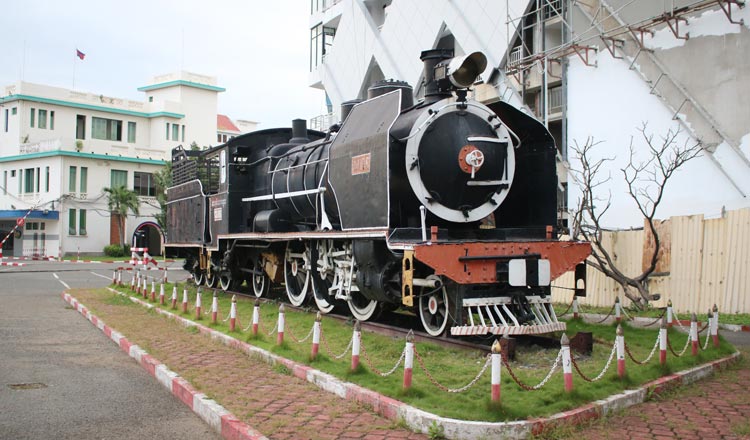 At 7am, a diesel-run passenger train gives a loud hoot three times before its departure. It will not wait for anyone. With the capacity to carry around 50 people, plus cargo, and reaching the top speed of 60 kmh, the train has comfortable seats, air-con and a modern toilet but absolutely no form of entertainment, which could be a good thing since you shall not be distracted from the beautiful things you will see through the windows.

As the train is heading out of Phnom Penh, you will already run into several interesting sights. First of them will be the people who live along the railway. People’s daily life in Cambodia, though simple as it is, is a “subject of beauty”, according to Philippe Bataillard, the Formateur Studion Images with the French Institute of Cambodia. Apart from that, the train will pass a dry port and several beautiful pagodas in the capital.

The window with a view changed almost completely about an hour later when the train entered the stretch of railway lying between Kampong Speu and Takeo. It is a stunning panorama, picturesque with a ‘çhessboard’ of paddy fields, palm trees and a river with people fishing, and water birds frolicking in the water. Like the protagonists from Edith Nesbit’s The Railway Children, farmers working in the field or fishing in a pond are likely to wave at you, and it is always a good idea to wave back.

From Takeo to Sihanoukville, you will encounter another different type of view, containing mountains, rivers and plantation. It is most delightful to look closely at the rocky mountains and hills, surrounded by dense forest, in Kampot. The image will surely urge every landscape photographer to yank out his or her camera.

“Oh, my god! This is not what you can see every day,” says Martin Ernest, a 22-year-old German backpacker who just took his first train ride in Cambodia. “It makes me a bit sad because I could not have a picnic there now.”

There are tray tables connected to the back of each seat on the train, giving you a chance to have a nice breakfast while admiring the view. But remember, there is no cafeteria on board, so you have to pack your own or buy from a small restaurant at the station or from a bakery nearby before boarding the train. Before reaching Sihanoukville, the train stops twice, for around five minutes each, at the station in Takeo and Kampot. Yet, it also has to pause several times en route to make way for another oncoming passenger or freight train.

“There is no exact schedule,” says Sok Sarin, a train conductor for more than two decades. “We learn about the coming of another train on walkie-talkies. There has not been any major accident.”

It is hard to take nap on board since the train often gives out a loud blare to warn whomever in front of it, including farm strays. Nevertheless, it would be a great waste to doze off during the journey because it could mean missing many things to inspire your new novel or next photo exhibition.

A Bit of History 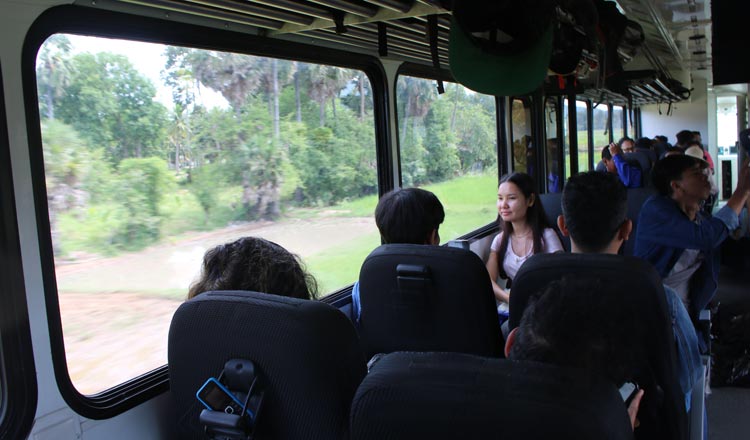 The first railway line, which runs between Phnom Penh and Poipet, was built by the French Administration in 1932 to expand its protectorate’s trade with neighbouring Thailand.

Thirty years later, the southern line that extends from Phnom Penh to Sihanoukville was constructed by the newly independent Cambodian government to deliver goods to the recently built Sihanoukville port. The order was given by King Sihanouk, King Monivong’s grandson and the father of the country’s independence.

Trains from Phnom Penh are only available on Friday, Saturday and Sunday. You can book a ticket online but the website may not work, so the easiest way to buy a ticket is in person. It is recommended to purchase the ticket two days in advance. The ticket office at Phnom Penh station is open from 8am to 4:30pm Monday to Friday, and 6am to 12pm on Saturday and Sunday.