The Cambodian Gun Club is advertised as “the greatest authentic military experience on earth”, but the site is also a battleground for navy and environment officials who claim jurisdiction over the area.

One would think that visitors come here to taste local delicacies, but the sound of gunfire makes it obvious that the compound is a shooting range.

After Ream National Park was established, the Environment Ministry was given a portion of it, while the Ream Naval Base received the other. The Cambodian Gun Club is located along a road in an area contested by both entities.

Environment officials say the establishment of the CGC is a violation of the law because it raises environmental and safety concerns, which were dismissed by navy commanders.

One provincial police official who requested anonymity says the concerns are about illegal land clearance and weapons being taken out of the range.

“[The shooting range] began operation in recent years. We acted to prevent the club from being built because it was going to encroach land in a protected area,” the environment officials says. “They stopped temporarily, and we reported to the Environment Ministry, but they resumed construction. When you visit the area [today], you’ll see how it looks.”

“The business belongs to the navy, most of my officials are treated like a threat by them,” he says. “Before, there weren’t many cases of land encroachment, but since the price of land went up, the problem started.”

“We are facing many challenges, we are facing off with powerful people and armed soldiers,” he adds. “Sometimes, when we patrol areas, we face potential legal action and violence.”

“They encroach land in the protected area without fear of our officials,” he says. “But since his Excellency Minister became head of the CPP working group here, there have been no more threats. He was just appointed months ago.”

“[The navy] wanted to expand the shooting range, but we have not received a permission letter from our ministry to allow them to conduct the expansion,” he says. “We intervened two to three times and reported to the Environment Ministry.”

“Before Minister Say Samal became in charge of the party’s working group here, we were afraid to even sleep at night,” the environment official says. “I even asked my officials not to patrol without at least four men because they needed to be safe.”

According to a letter signed by Interior Minister and CPP vice president Sar Kheng on March 6, Gen Saroeun was requested to become the deputy head of the CPP working group in Phnom Penh. A day later, the permission was granted by Prime Minister Hun Sen.

The CGC was established just two years ago, following an influx of Chinese tourists and investors in Sihanoukville.

Another local environment official who requested anonymity says most of the customers of CGC are Chinese.

He says one could technically shoot at anything, as long as there is money to be made.

“Sometimes they [target] chicken and watermelon,” the official says. “The fees are based on the duration and the weapon of choice. It’s at least $50 for an AK-47.”

Samuth Sothearith, director of the provincial environment department, says his department told Ream Naval Base officials that permission is needed for them to operate a gun range in the protected area.

“I wish to tell you that we told them to stop. We asked them [the navy] to make a request to our ministry,” Mr Sothearith says. “This area is under the control of my ministry – they have to follow the law, they need permission from my ministry.”

However, it didn’t work as Mr Sothearith has not received a ministry letter allowing the navy to run the CGC.

“I have not received the letter from my ministry on whether or not [the navy] has permission,” he says. “We already asked them to suspend their activity. We will cooperate with them in order for them to follow legal procedures.”

“We speak to them nicely, but we are enforcing the law,” Mr Sothearith says. “Our ministry leaders have always paid attention, we adhere to code of ethics as officials, we try to make them understand before implementing legal procedures.”

When asked if his subordinates face challenges when enforcing the law, Mr Sothearith says “sometimes we face challenges, but it’s normal for law enforcement agents.”

Environment Ministry spokesman Neth Pheaktra declined to comment on the matter and referred the question to the Defence Ministry.

According to a senior provincial police official who requested anonymity, the arrival of Mr Samal has made the situation a lot better.

The official says military officers used to vouch for certain foreign nationals accused of crimes, but the practice has stopped since Mr Samal became head of the CPP working group.

“As of now, I do not see any more military officers vouching for them,” the official says, noting that he is also concerned about the use of weapons in the province.

Tea Sokhonn, a 38-year-old Sihanoukville resident, says he’s concerned about the control of weapons in Sihanoukville and that the authorities must provide security in the province.

Mr Sokhonn says a shooting range must be monitored by the authorities to ensure that weapons do not leave its premises.

“A few months ago, a Chinese man was shot dead on a busy street, I saw the video footage on Facebook, it was very cruel,” he says. “I wondered where the weapon came from. The authorities should pay more attention on the management of weapons.”

The Chinese national was identified as 28-year-old Tian Zhou, who was shot dead by a suspect wielding a Glock pistol.

Footage of the incident went viral on social media. Two Chinese nationals were arrested after they were suspected of being connected to the fatal shooting.

Major General Chuon Narin, chief of provincial police, says his officials have done well and that the public should cooperate with the authorities if one of them is suspected of not enforcing the law.

“I appeal to all people to join with us. Our police cannot fulfil our duties well without cooperation from the people,” Maj Gen Narin says. “We have been successful in maintaining security because people participated.” 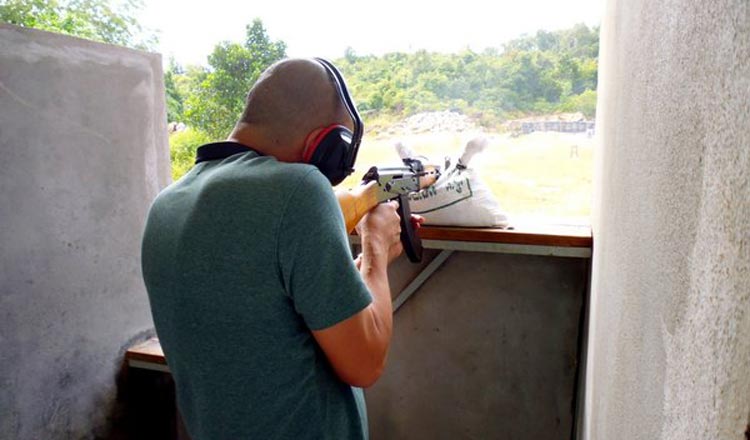 He said the shooting range is open to the public because proceeds go to the Anti-Air Force Unit. However, he denied allegations that the CGC impacts the environment and that its weapons are being smuggled out by visitors.

“Yes, we did allow the public to shoot in order to support the development of the base,” he said. “There are no environmental impacts there. The weapons used are only used at the shooting range. We have internal regulations set in place in order to regulate visitors.”