Originally hailing from Pursat province, Mr Long Lavy has always been fond of drawing the landscape of nature since he was 9, and he particularly loved drawing trees. With no formal art education, Mr Lavy held a pencil in his hand and ambitiously dreamed of becoming a renowned artist. Woefully, the financially strapped Lavy family came to settle in Kandal province. Then, circumstances forced Mr Lavyto  leave his family to pursue the education that his parents could not afford to provide for. Say Tola tells his story. 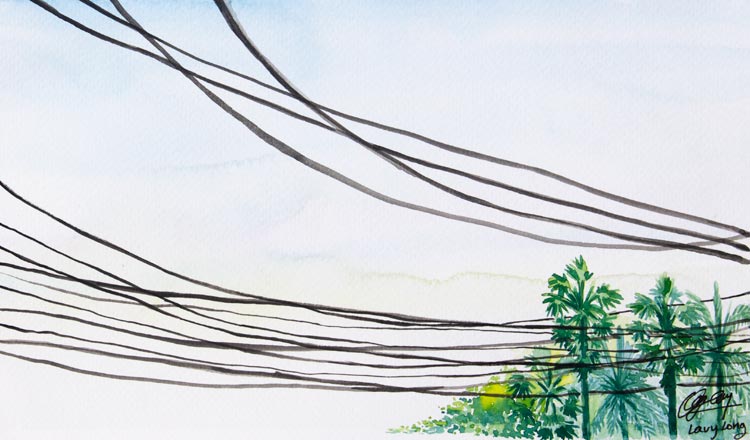 Due to poverty, Mr Lavy was sent by his mother to live with his aunt in the hope that he would get a chance to study and eventually pursue a degree in his field of choice. But on his way to-and-fro school, 14-year-old Lavy would always find himself stopping by a neighbour’s house for a few minutes, just so he could stare at the man adding splashes of colour to his paintings.

Filled with excitement and curiosity upon seeing the beautiful art work, he recalled: “One day, I barged into his workshop and added colour to the painting.

His reaction was a scathing one as he thought I would mess up his painting. However, I persevered and proved my passion by drawing palm trees under the blue sky. In a turnaround, he liked it and allowed me to learn painting and colouring with him.”

Despite living with his aunt, Mr Lavy still had his struggles as a student. Without enough money to resume classes as a Grade 9 student, Mr Lavy trained himself to be a boxer to ensure that he would be able to continue his study and support his family. He then took a job as a security guard to earn more money, where he worked the night shift. 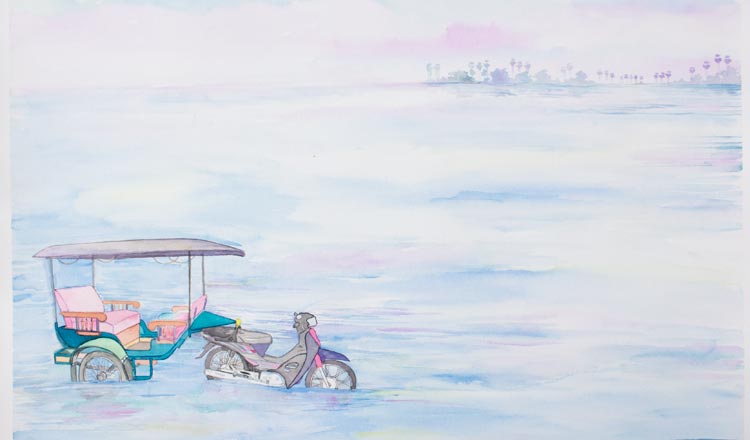 He said: “I fought and trained hard. At one point I was even selected to fight at the national level. Each time, I only got between USD7.5 to USD10. It was the only thing I could do for sustenance. Sadly, other students thought I was a gangster, what with the many bruises on my face and body.”

He added: “After four year of working as a security guard, it got to a point where I couldn’t muster enough energy to commute on a bicycle for 30 kilometers anymore. So I gave up school right before the National Exam and resigned from the job.”

After Mr Lavy gave everything up, he started noticing an increasing number of tuk-tuk drivers on the road and he thought this could finally be the solution to his family’s financial situation. So Mr Lavy spent all of his savings to buy a motorcycle and a remorque.

“My father used to be a soldier, yet we could only live in a small shack made out of palm leaves. Things were really difficult when it rained so my parents borrowed some money from our neighbour to build a wooden house. But after that, my father lost his job and things just went downhill from there,” he said, with a heavy sigh.

He added he could afford to help his family more by being a tuk-tuk driver. Not only did his living standard slowly improve, his job also led him to cross paths with Lauren Iida, co-founder of Kampot-based Open Studio Cambodia. Initially, Mr Lavy did not know that Ms Lauren is a visual artist until after she held several exhibitions in Phnom Penh.

And when Lauren organised an art group to Kampot, Mr Lavy was asked to accompany the group and draw again. That was when Mr Lavy got to hold a pencil and play with watercolour again, after years of abandoning his one true passion.

“I felt very shy at first, as I was not used to drawing buildings. I drew a man who left his family and it was exhibited at Mirage Contemporary Art Space, alongside other art pieces.” 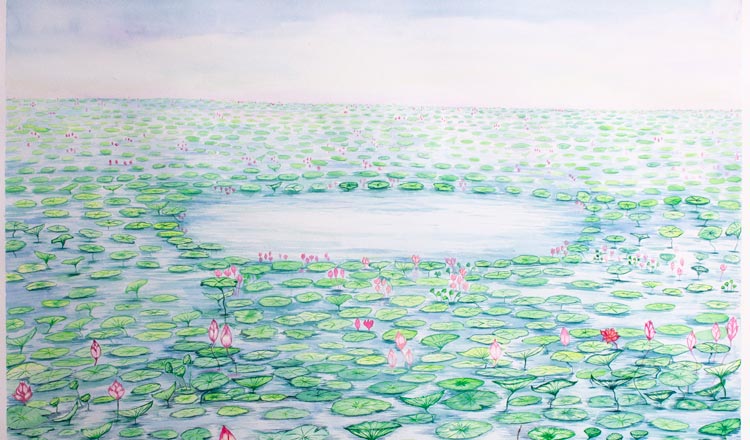 “Art has healed me. I am able to release my pain and sorrow through painting. And that was the only reason why I did not hesitate when Lauren asked me to draw for this solo exhibition,” Mr Lavy added, referring to the exhibition at the Chinese House last week, where 22 of his pieces were displayed for the first time ever.

With titles such as ‘My History’, ‘Dreamscapes’, ‘Far Away’, ‘On the Move’, ‘My Heart’ and others, Mr Lavy said they conceal all of his stories – pain, struggles, a nomadic life and fear of losing the Khmer essence such as tuk-tuk and the landscape to urbanisation.

“I am very happy when my artwork and my stories can be shown to the public. The participants made me feel that everything is possible in life when you put in effort towards achieving your dreams. It motivated me to paint more as it helps both financially and mentally,” Mr Lavy concluded with fervent hope to put on another exhibition soon.

For your information, Long Lavy’s artwork at the Chinese House will be exhibited until August 4.