Home - Wat an Abode for a Slum

Wat an Abode for a Slum

In Cambodia, Wat or Buddhist pagoda is a site of reverence where Buddhists, which make up more than 90 percent of the country’s total population, come to worship or engage in religious festivities. As an abode for the monks, pagodas all over the country are highly respected, and Khmer people tend to be mindful about what they speak or do on their compound. Thus, it must be met with disbelief that a 100-year-old monastery, located in the heart of Phnom Penh, almost has its identity overshadowed by the people who built their houses all over this enclave. Strange but true, this is what Taing Rinith uncovers.

It is the crack of dawn at five on one morning. The sky is still dark, but the 13 monks residing in Broyouvong Pagoda, located a stone’s throw from the Independence Monument, have already begun their day by reciting the morning sastra before a big statue on Buddha in the temple.

When recital is finished and breakfast is tucked away, they amble out to ask for food and alms, a routine followed by all ordained monastics all over the country.

However, a very big difference could be seen when they are leaving into the street.

While monks in other pagodas walk through a big compound, filled with stupas and even decorative statues, monks at Broyouvong Pagoda have to pick their way past the peoples’ houses occupying all the land surrounding the temple. Heading towards the concrete gate, blackened with age and not attached to any wall, they run into men, women and children, who have just woken up and grooming for the day.

Even the pagoda’s cemetery, the resting place for spirits of the departed, has also been occupied by closely packed, decrepit houses. Meanwhile, the temple, the only part left unoccupied in the monastery, is barely visible just several metres from the gate. In fact, at a glance, the pagoda looks more like a slum. Or maybe it really is a slum.

Broyouvong Pagoda has only one kodi or monk’s shelter, which is a room atop a bathroom. It belongs to the abbot while the rest of the monks are ‘barricaded’ in a windowless basement underneath, with small rooms built.

Huy Try, a devoted Buddhist and a motor taxi driver roving in the area, stands witness to what has been happening here for a few years now, but he still could not stop feeling sorry for all the monks in the pagoda.

“There is not a single metre out of the temple which is not occupied by people,”

Try says. “I believe this is the only pagoda in Cambodia, where a pagoda’s ground is all packed with people’s houses. It is wrong for people to live here because a pagoda should be a place for worship only.”

Ong Sithi, a 41-year-old senior monk who has been living in Broyouvong Pagoda for more than 20 years before the Khmer Rouge regime, the sanctuary had been no different from other pagodas in the country.

monks here were evacuated to the countryside, just like other Phnom Penh

residents, and the pagoda was abandoned,” Sithi says.

“After the fall of Khmer Rouge in 1979, it was not until 1991 that monks were here again. During the decade before that, people who did not have places to live, come and settle here. We could not simply (have) asked them to leave.”

Sithi adds that there are roughly 500 households situated in the compound. While the authorities allow them to reside on the compound, they are not given the land in.

Meanwhile, Poch Pang, a 75-year-old flower vendor who has lived in a small hole-in-wall house since 1979, says when she raised her roof near Broyouvong Pagoda, there were less than a hundred families.

“When we returned to Phnom Penh, all abandoned houses were already occupied,”

she says. “Then I heard from an acquaintance that there was vacant land here. It has been 40 years so far.”

“Then the monks came back to the pagoda. As a Buddhist, I was upset, but we had nowhere to live.”

However, Pang adds that it was also convenient since the people here do not have to go far to pray or to participate in Buddhist rituals such as Pchum Ben. Yet, Hoy Try, who observes the community every day, claims that at least half of the residents are Vietnamese. 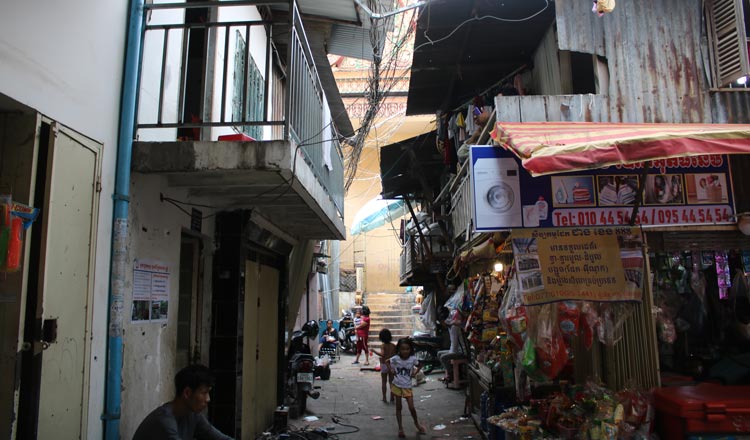 According to Sithi the senior monk, there has not been any major conflict between the monks and people who live in the slum although the monks are often distracted by music and songs wafting into their yard as people need entertainment.

Not quite in deference especially since the monastic discipline prohibits monks from indulging in all kinds of entertainment. Yet, he sulks that the slum ruins the beautiful pagoda.

“Broyouvong Pagoda has a very beautiful temple containing beautiful murals and Buddha statues,” Sithi says. “It also has beautiful stupas, but people have destroyed them.”

Little is known of the history or origin of Broyouvong Pagoda. It was reportedly built at least one century ago by the royal family and was named after the Great Grandmother of the late King Norodom Sihanouk.

“No one knows much about this monastery,” says Chen Chanratana, a Cambodian historian who has been studying the evolution of Phnom Penh.

“What we can say now is that the pagoda almost loses its identity as a sacred site, due to the fact that it is now located in a slum.”

While the temptation of entertainment has been cast over the monks, many of the slum dwellers too have been living under a pall, in the shadow of eviction.

That dreaded day may come, sooner if not later, for the squatters who are encircled by the rising prices of legitimate housing, perching precariously on land that they lived on for decades but do not own, obviously.

One of them, Sor Phea, a vegetable vendor, says she is only living day by day.

“I only hope that we will receive compensation if we are asked to leave in the future,” Phea says. “We are only poor and cannot buy a house at today’s prices.”