“This region is exploding,” says Canadian celeb, author, wine-maker and executive producer David Rocco. “These are the countries of the future.”

Rocco, relaxing in the luxurious surroundings of 5-star eco-living at Siem Reap’s Templation boutique hotel, is explaining why he’s in town and why he’s filming his new TV show – David Rocco’s Dolce Southeast Asia – in Southeast Asia including Cambodia where his crew are shooting two half-hour episodes – one in Phnom Penh and one in Siem Reap – for the said show. 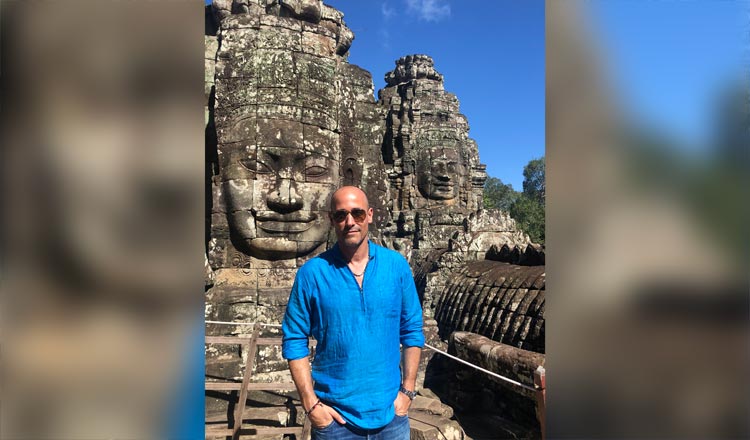 Now Rocco’s back in the region, looking for action.

“As executive producer and host, I’m thrilled to be back and shooting in Southeast Asia,” he says. “My company Rockhead Entertainment has produced over 170 episodes that have aired internationally on National Geographic, Fox Life, Food Network, Cooking Channel and TLN to just name a few of our broadcast partners.

“We successfully completed the first leg of the new TV Series by filming several episodes in Malaysia and Singapore, and now we’re working on the second leg in Vietnam, Cambodia and Thailand.”

“I’m surprised how progressive or modern it is,” he says, “When you’ve got a Starbucks in town, you know you’ve arrived.”

And he should know. Named one of “Canada’s Top Ten Style Makers” by Canada’s fashion magazine Flare, he is regularly quoted in the major Canadian media, and makes regular guest appearances on Canadian and US TV.

And perhaps backing up his claim that Siem Reap has arrived was the arrival in town at the same time of another international TV host, Jeremy Clarkson, in Siem Reap to film for season four of ‘The Grand Tour’ which features a slew of Southeast Asian countries including Cambodia.

Clarkson, together with Richard Hammond and James May – the other two members of the former ‘Top Gear’ trio – intrigued 2.2 million Instagram followers with a photo of the trio and crew recreating their version of the famous Beatles Abbey Road album cover by walking across a pedestrian crossing in Siem Reap’s famed Pub Street.

Meanwhile, back to David Rocco, who explains that Cambodian cuisine is also on the verge of arriving, due to young emerging Khmer chefs who have international experience and are slowly gaining international reputations.

“These new chefs try to put Cambodia on the international map,” Rocco says.

Food aside, what seems to really excite Rocco about his Cambodian sojourn are cultural aspects, such as the revival of lost Khmer culture by Cambodian Living Arts.

“The founder Arn Chorn-Pond has an incredible story,” Rocco says, “While Cambodia Living Arts is an amazing story in itself.”

Even more amazing for Rocco is the presence of a circus based in Siem Reap: Phare, The Cambodian Circus.

Some members of the circus troupe performed at an evening function at Templation Hotel, which Rocco enthusiastically filmed.

Rocco also delved into the realm of fine arts in Siem Reap, connecting with fellow Canadian Serey Siv, the owner and founder of Mirage Contemporary Art Space in Siem Reap.

Siv’s gallery lives up to the notion of having arrived, and during June, Mirage held an “exquisite watercolour exhibition” entitled ‘Trails of Siem Reap’ by Singaporean artist Foo Kwee Horng. 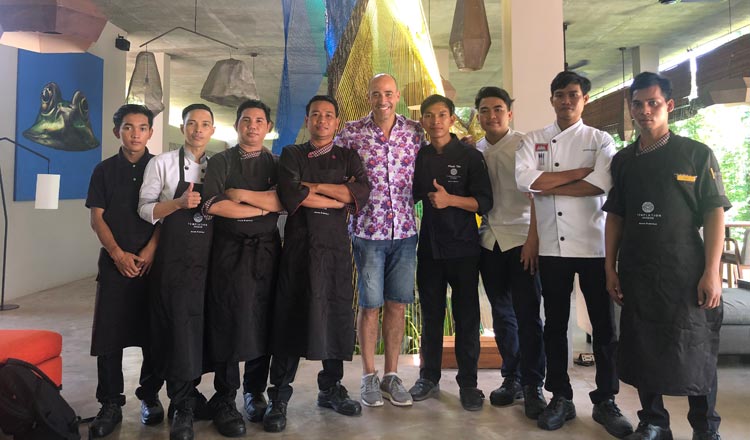 Artist Hak Bor, whose sculptures are on show in the exhibition, will also give a talk at the gallery on July 13, and he says his work has matured partly because of his international experience.

“I carve wood on my weekends, and I work as an animator at Phare Ponleu Selpak film studio during the week,” he says. “But the most exciting thing for me is to gain new knowledge. So my trip to Paris in 2018, with visits to many museums where I learnt so much, was a great memory.

“Another exciting thing was my invitation to Japan for the Tokyo Film Festival to receive the award for the best Cambodian animated film, ‘Hair Zero’.”

Hak Bor says that art is good for him, good for Cambodia and especially good for Siem Reap.

“Art has been very important for me since I was a child and I always felt that my life is related to art,” he says. “And I think that life and art must come together, it’s a whole.

“I think that art gives people new concepts and new ideas to develop socially and spiritually. Art is a mind-maker.”

For more insight into Siem Reap’s cultural leanings, watch out for the documentary series David Rocco’s ‘Dolce Southeast Asia’ which will air sometime later this year.

“The shows have aired for the past seven seasons on National Geographic and we are in discussion with them about this series as well as with a few of the big streaming services,” Rocco says. “We will lock things in, in a few weeks.”