A Japanese national today is set to hand over 85 Khmer artefacts to Cambodia’s Culture Ministry, all of which will be kept at the National Museum.

According to a ministry statement yesterday, a ceremony will take place today at the National Museum in Phnom Penh.

The artefacts date back to the pre-Angkorian, Angkorian and post-Angkorian periods. The artefacts include Buddhist and Hindu statues, decorative items, bronze statues of animals, gold necklaces and ceramic items.

“Fumiko Takakuwa, a Japanese woman, has decided to voluntarily hand over all the artefacts to the government and the people of Cambodia in dedication of her husband, Mori Mita Takahawa,” the statement said.

Minister of Culture and Fine Arts Phoeurng Sackona said the ministry, on behalf of the government and the Cambodian people, expressed its admiration and thanks to Ms Takakuwa, who has kindly offered to hand over the artefacts to Cambodia.

She also expressed appreciation to Masatomo Hoshino and his wife who facilitated in the transporting of the artefacts to the Kingdom. 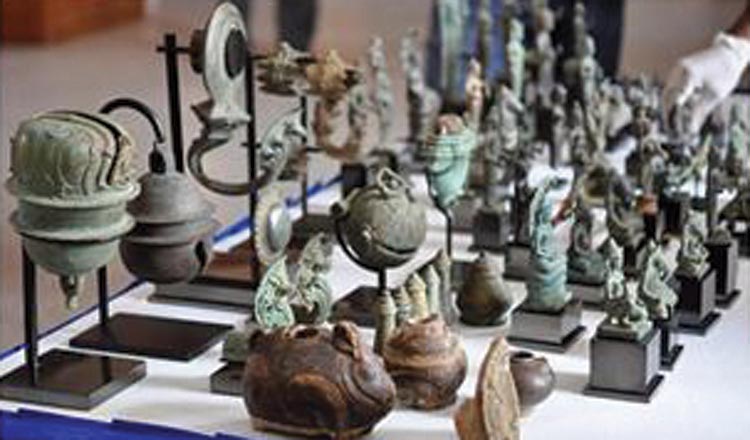 “The return of national treasures is always a return of the souls of the ancestors and also the pride of the nation,” Ms Sackona said. “The handover of the artefacts to the home country reveals an appreciation of cultural values and humanity upheld by collectors.”

The Culture and Fine Arts Ministry has encouraged private individuals, museums, companies as well as global institutions that are in possession of Cambodian artefacts to cooperate with the Cambodian government, through the ministry and embassies in each respective country, to voluntarily return the items to the Kingdom.

“Cambodia considers this a remarkable act that not only shows an appreciation of the culture by each nation, but also that it contributes to the well-being of the Cambodian people, who have gone through a civil war and suffering from the tragedies of genocide by Pol Pot’s regime,” the statement said.

Prak Sonnara, director-general of heritage at the Ministry of Culture and Fine Arts, said that some of the artefacts handed over by Ms Takakuwa were made of metal, gold and sandstone.

“We are happy that many people from various countries have been kind to handover artefacts to our country,” Mr Sonnara said. “As I work in the culture sector, I’m really happy for our country to see artefacts returned.”

Keeping the Khmer language up to date

City Hall calls for PassApp company and drivers to negotiate