The rescue of survivors from the Sihanoukville building collapse could not have been done without the efforts of rescue workers who scoured the site for victims for about three days.

Major Chap Putdavy, a commander from the emergency rescue unit with Rapid Rescue Company 711, said the collapse of the seven-storey Chinese-owned building was a first for her team.

“It was the first time my team and I were given the task to rescue victims from the debris of a collapsed building in Sihanoukville,” Maj Putdavy said.

The building, which did not have construction permits, collapsed while under construction at about 4am on June 22, killing 28 workers and burying alive 26 others.

Maj Putdavy said her unit received an alert about the collapse at about 9am, and Rapid Rescue Company 711 was deployed.

Led by Major General Soy Narith, deputy commander of Brigade 70, the Rapid Rescue Company consisted of 30 officials, including Maj Putdavy and her unit.

She said they were deployed from an airfield near Phnom Penh International Airport, and arrived in Preah Sihanouk province at about 10.44am.

Maj Putdavy said that upon arriving at the scene of the collapse, her unit went straight to work.

“We arrived at the scene with rescue equipment and we were divided into two groups,” she said. “The two groups were then divided into smaller groups so we can work with other forces from other units to rescue victims.”

Maj Putdavy said her team was briefed by a construction manager who told her that construction workers were asleep when the building collapsed.

“Our unit totalled 71 people, including 14 women,” she said. “Before we began rescue operation, we needed to study the location of the building and identify where the workers were sleeping.”

She said that this method was learned from Japanese rescue workers when RRC 711 was created in 2008.

“Most officials in my unit, including me, were sent to train on how to extinguish fire and rescue victims from countries like Japan, Singapore and China,” she said, noting that rescue workers must be careful not to cause further collapses by using excavators.

That day, dressed in orange and blue, she was a proud member of the Royal Cambodian Armed Forces’ RRC 711.

She said her unit was in charge of transporting victims from the debris and ensure that they make it to the provincial referral hospital.

Maj Putdavy said she was paid about $300 from Prime Minister Hun Sen for the rescue effort, but she said that more training would also be beneficial.

“The government should send more officials to train on how to rescue victims from disasters,” she said. “We also want additional training from foreign countries who have experience in dealing with big incidents.”

Maj Putdavy said that at first, authorities did not allow her unit to be deployed, due to a lack of confidence in their capacity, but training from foreign countries helped convinced the chain-of-command that her unit was capable of saving lives.

“We provided the idea on how to rescue victims and they [superiors] allowed my unit to join the rescue operation,” she said.

Major Im Chandaro, a rescue specialist from RRC 711, said he worked tirelessly for days in order to locate victims.

“At first, authorities did not have faith in our capacity, but we explained to them and we were able to be deployed along with others to rescue victims,” Maj Chandaro said. “They gave us the task to conduct a rescue operation, but we could not have done it ourselves – we all cooperated to rescue victims.”

Maj Chandaro noted that it took time to rescue the victims because the country lacked rescue equipment.

“Our country does not have equipment to quickly locate victims buried beneath rubble like in other countries,” he said. “If we had them, we would have been able to rescue the victims faster.”

Maj Chandaro said it took the efforts of many in order to make up for the lack of equipment.

“Officials from the Sihanoukville autonomous port, police, military police, navy, along with Chinese construction workers, cooperated together to help rescue victims of the collapsed building on June 22,” he said.

Maj Chandaro noted that he participated in training sessions held by foreign countries in the past, and that it would be beneficial if the government sent rescue workers for regular training abroad. 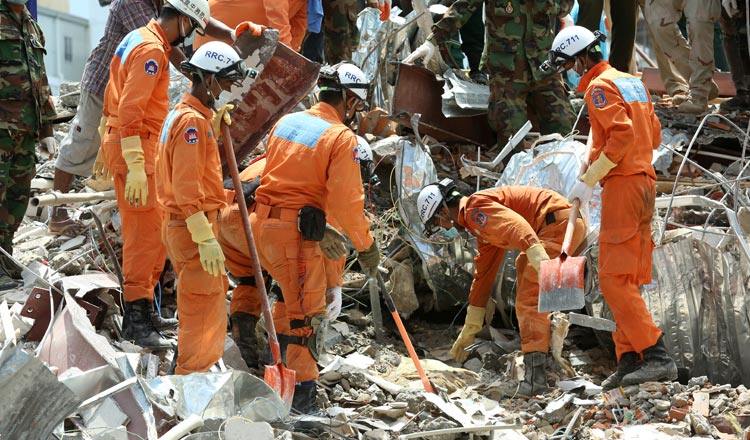 “I think we should draft a standardised rescue method to be used when training our officials in Cambodia,” he said. “We also must ensure that a collapse like this will never happen again by having engineers evaluate construction sites.”

Maj Gen Narith, the deputy commander of Brigade 70 and the person in charge of rescue operations, said rescue units did a good job in saving victims.

He said that despite training every two years with Japanese Paramedic Rescue, their capacity still needs to be improved.

He said that soon, the government will hand out medals to rescue workers.

“Prime Minister Hun Sen will provide gold medals to rescue teams soon,” Maj Gen Narith said. “I think this is a good thing to encourage rescue workers who helped victims at the site of the collapsed building in Sihanoukville.”

According to Mr Hun Sen on Monday, Sihanoukville collapse rescue workers were handed money and will be awarded medals during an upcoming ceremony.

Mr Hun Sen said an awards ceremony will be held for rescue workers who worked to help clear the building’s debris and rescued victims.

“I will prepare a ceremony to give them gold medals,” he said, noting that buildings collapse elsewhere around the world. “This case also happened in Bangladesh, Taiwan, China and other countries, but we do not want this case to occur.”