Deep-Fried with Hope and Hard Wok

To be blunt, fritters are not really a good choice for a healthy diet. Yet, sometimes they are so irresistible that you need to have a ‘flout your diet’ day once in a while to enjoy the hot, crispy texture. Speaking of fritters, you can’t go wrong with fried banana, or chek chean, the ubiquitous deep-fried halfway-between-dessert-and-lunch snack available around town for next to nothing. However, there is only one shop which is renown for their fried bananas. Taing Rinith writes about Chek Chean Pises as well as the story of a hard-working woman behind its success.

In the morning, if you happen to be jogging on the sidewalk near the Chinese Embassy on Mao Tse Tong Boulevard, you will detect a delicious aroma, the one created by a sweet food being deep-fried in hot oil. The aroma comes from a small hole-in-the-wall house near a crossroad, where you will find five young women frying bananas and several other fritters inside two large pans filled with boiling soybean oil, under the supervision of a 59-year-old woman. In front of the house is a big sign reading “Chek Chean Pises”, which translates as Special Fried Banana.

It may sound as an exaggeration but this is really the place where you can get the best Chek Chean, or possibly the best fritters in town. Almost twenty years in business can conclusively prove that.

The signature bananas are carefully deep-fried with flour and manage to have the perfect crispiness outside with a soft, flavourful interior. Unlike many fried bananas on the street, here the end result is barely greasy, thanks to the careful attention and the fact that the oil which is used to cook them is always new. Priced at only $0.30 each and served in a grey paper bag, it is a great filling option for a hungry traveller with a limited budget. Another plus is that along with the deep-fried treats, the customers are given free sweet and savoury crusts, which allow them to enjoy the delicious crunchiness.

In 2000, Sok Lang, the owner of Chek Chean Pises, closed her failing steel shop to open a place to sell chek chean. People were laughing at her. In the country, selling fried bananas used to be considered a small-profit business for the poor and “uneducated”. But, Lang did not care about the cynics because to her, helping her husband, a government official and raising their three children was more important. In fact, it was not long before she made those people swallow their words.

“It was difficult selling chek chean alone in the first few months,” Lang says. “I had to work so close to the fire and hot oil and frequently scalded myself. But, I did not give up.” 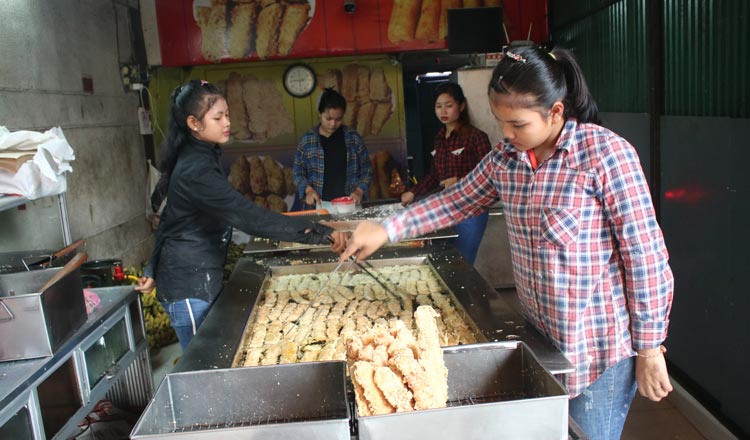 Lang knew that in order to attract customers, she had to come up with a new, better recipe. That was why she had “conducted experiments” with ingredients such as coconut milk, cream and sesame seed until she came up with the satisfying taste enjoyed by thousands of people today.

“We also need to think about our customers’ health,” Lang says. “That is why we have used paper bags instead of plastic bags and use only new oil to cook our fritters. It has not been easy, but people have kept coming back.”

Lang also tried her hand at other deep-fried foods, including sweet potatoes, taros and spring rolls, which have all become popular, although not to the same extent as Chek Chean. The owner’s hard work, meanwhile, paid off since she had opened another shop on Kampuchea Krom Boulevard (near Santhomuk High School), supervised by her youngest child. The two shops are selling thousands of fritters every day.

“This business gives me two important lessons,” Lang adds. “First, no matter what you do for a living, you must at least try to do your best yourself to find success. Second, you have to bear in mind that you are doing it for people you love.”

Fun things to do on a rainy day